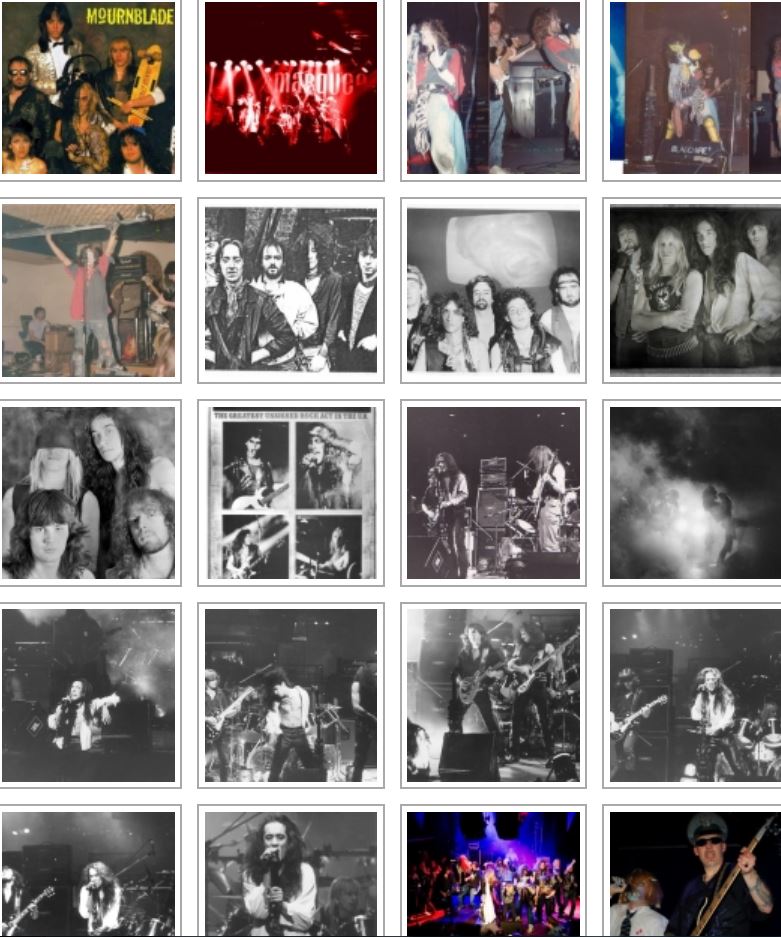 Tracklist
A1 Battlezone
A2 Sidewinder
A3 In The Arms Of Morpheus
.

.
Mournblade was a British NWOBHM band who made two albums in the 1980s: Time’s Running Out and Live Fast Die Young. Several of their songs feature references to Michael Moorcock’s work.
– by ’86, they were regularly headlining major London venues like the Marquee, the 100 Club and Dingwall’s. It should be remembered that prior to this, they’d slogged the London pub/club circuit for 2 years and then toured nationwide, during ’85 clocking up over 250 shows. Much of this time was a blur of motorways, sleeping rough, soundchecks – and gigs! In addition, supporting major acts (as mentioned before) gave serious exposure. Most importantly, they were filling venues…by ’86 and ’87 filling decent-sized venues. Fans received their own newsletter, ‘The Machine’, and this went to various countries such as the US and Australia.
.
Mournblade…where does the name come from?
– Mournblade was the black Sword of Chaos (along with its sister, Stormbringer – but that name was already in use by another band at the time) from Mike Moorcock’s science fantasy books. The band went to meet Mike at the Forbidden Planet in London, where he gave them permission to use the name. At the time, Dunken’s lyrics were strongly influenced by Moorcock’s themes – evident in the bands’ earlier material.
.
…the Hawkwind connection?
– tenuous, although the above mentioned Moorcock-factor was an obvious link (Mike being a part-time member of Hawkwind). There’s no doubt that Rich’s riff-er-ama guitar style was HW/Dave Brock influenced, but also by the sounds of the punk/metal crossover – the Pink Fairies, the Sex Pistols, Motorhead, Angel Witch etc….but for some reason the music press (Sounds, NME specifically) went through a period of tagging Mournblade as ‘Hawkwind-influenced’, even ‘Hawkwind rip-off’ (thanks to Stefan Cherazzi). Mournblade signed to Flicknife Records, as were Hawkwind, and later supported them on various tour dates. The association with the free festivals was also a factor.

“Mournblade” were named after the brother sword to “Stormbringer”…born out of Michael Moorcock’s 1965 novel of the same, “Stormbringer”.
Back in the day, a fellow “Hawkwind/Moorcock” fan recommended them, and based on the fact that I love both, I thought I’d give these guys a try. The fact that they recorded on the “Flicknife” label also helped, as during the 80’s Hawkwind had several releases there as well.
.
On this EP Mournblade helped bridge the gap between the space rock sounds of Hawkwind, and the NWoBHM bands of the late 70’s/early 80’s. But to be totally honest, I find more pleasure in hearing this EP today than I did upon its release. Back in the mid 80’s, the mere idea of a band influenced by the whole 70’s Hawkwind/Moorcock space rock thing seemed appealing at first, hence the reason I bought it. But over time I grew very tired of this EP, and remember saying to myself, “why bother?…I’ve been there and done that already”. Times had changed…and this was now the 90’s…time to put the Mournblade EP (and a whole lot of other stuff) away, and get with the times old man! CD’s, Backwards caps, Primus, Ministry, Dream Theater, and Soundgarden were in, so I was busy giving all that stuff a try. I grew tired of that fairy quickly too if I recall.
.
It’s funny how things change over time, as I gave this EP a spin recently (first time in 20 years?). Sure…it does seem a bit dated in spots, but after all the generic poseur crap that’s come out the last 20 years or so, Mournblade’s “Time’s Running Out” has caught my interest once again.
Fans of early to mid 70’s Hawkwind will definitely enjoy this. To my knowledge it’s never been reissued on vinyl or CD…so you might have to do some digging at the used shops, or perhaps online.
.
I’ve added one of my YouTube videos that feature a few of my favourite cuts from ‘Time Is Running Out’. The video incorporates imagery sourced from my vinyl EP; jacket, labels, etc. The video can be found on the release page for this EP.
.
.
FOR FANS OF:
Heavy Metal
N.W.O.B.H.M
Motorhead
Hawkwind
Angel Witch
Sex Pistols

The band was formed in September 1982 by Dunken Francis Mullet and Richie Jones.  With similar interest in science fiction writing and the music of bands like Hawkwind, The Pink Fairies and Motörhead,  they quickly started writing music together and within a few months Mournblade did their first gig on stage at the Ealing College student union hall with the original line up of Derek Jasnock (keyboards), Richard Jones (guitar), Dunken Mullet (vocals), Jeff Ward (drums) and Clive Baxter (bass).

The band’s early influences included the books of Michael Moorcock, apparent in early material and theatrical live shows (at a book signing Moorcock officially gave Dunken and Richie permission to use the name “Mournblade”, a sword from one of his most famous books). At one stage the live show featured Mullet undertaking 14 costume changes as well as many props, notably a 2.5-metre wooden sword, a 1.5-metre high Victorian doll (“Victoria”), a decaying World War I soldiers mask, a devil suit (including a cape with a 3.5-metre wingspan) and a ‘space helmet’ made from a motorcycle crash helmet sprayed gold, covered in LED lights and a small laser.

The band’s first official release came after signing with Flicknife Records, “Times Running Out”  (SHARP 030, Flicknife Records). The band gigged tirelessly around the UK promoting their album, performing over 400 gigs over the period of a few years. Mournblade were also great supporters of the free festival circuit playing at the Stonehenge Festival in 1984 and 1985 amongst many others. Despite this hard work, Mournblade’s initial success, through links to Hawkwind, faded as they failed to impress Hawkwind fans or a general rock audience. They did build up a steady loyal following with fanbases in London (where they regularly headlined the Marquee Club, 100 Club and Dingwalls), South Wales and the Midlands and their hard work caught the attention of Kerrang! magazine, resulting in a full-colour feature and giving rise to the oft-quoted ‘Future of Heavy Metal’ plaudit.