MONSTERS OF ROCK 1980 This is a set of live recordings from all the bands that have played in the first ever monsters of Rock festival in Donnington: Rainbow (Stargazer + all night long), Scorpions (2 songs), Saxon, April Wine, Touch, Riot 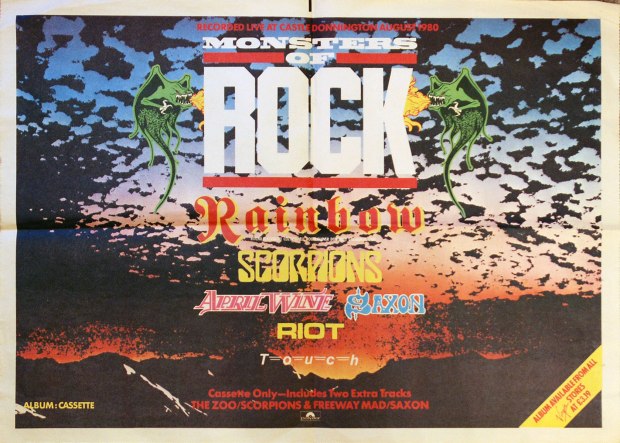 Reading pre-eminence as THE hard rock festival of the Uk was given a thorough shaking in 1980, when promoter Paul Loadsby established a one day festival that focused on presenting heavy rock and metal acts. Loadsby was an experienced promoter who was responsible for organising Richie Blackmore Rainbow summer UK jaunt and the Donington show was to be the final show of the tour.
Donnington circuit is not exactly a verdant setting ,but it beat Richfield Ave at Reading, as the ground sloped slightly , so the punters got a pretty good view of the stage- which was a definite advantage. The raceway has the advantage of being near major roads and rail links and it was probably as amenable a venue as most other festival grounds of the day.
It rained considerably in the days preceding the show , which made conditions unpleasantly muddy for the punters, but this was better than it pouring on the night and the 35,000 who attended *were given satisfaction by the fairly sound lineup of heavy UK and overseas acts who performed in the open air on a warm but overcast day.(This is the attendance figure quoted in most reports- the Samaritans however, give a figure of 60-70,000 and declare that the facilities provided were totally inadequate “”perhaps due to many more arriving than had been expected””)
The Samaritans also state that camping facilities were provided and about 400 people camped out the night before , this practice was not encouraged in 1981 and led to some contention.
There was only one stage at this date so longish changeover times between acts would have been something the audience had to endure- pretty much a re-run of Knebworth. However, there WAS a large video screen so it was possible to get a good view of the bands once it was dark enough for the screen to be viewable
The quadraphonic sound system assembled by Loadsby was not an overwhelming success. The day before the show the PA was damaged by an explosion that was apparently caused by the crew who were testing drummer Cozy Powellâs pyrotechnics. It was an expensive test- Â£18,000 worth of damage was done to the stage set-up and this may have affected the sound of the PA as many punters complained about the sound being too quiet.
Ticket prices were Â£7.50 in advance, reasonable for a single day show with this number of well known acts. For all this the festival lost money . The circuit can hold over 100,000, but Rainbow were not in the same league as the likes of Zeppelin who could have easily drawn a crowd that size, but it was deemed successful enough for another event to go ahead in 1981 and beyond. Initially it was planned as a one off event, just a big way for Rainbow to end their ‘Down To Earth’ tour. It quickly shaped up into something much bigger.

The Monsters of Rock show was less eclectic than previous festivals, specialising instead on the recent interest in Heavy Metal, in particular, the New Wave Of British Heavy Metal that a lot of older bands like Rainbow and, second on the bill, Judas Priest were riding. Saxon were the NWOBHM representatives here with Scorpions from Germany, April Wine from Canada and American bands Riot & Touch completing the bill.
The host for the day was DJ Neal Kaye who I’d seen touring with Iron Maiden earlier in the year. He was great, and really kept the momentum up in between acts.
Inside the arena there were plenty of eateries and toilets but no bars. But that was ok, ‘cos you could take you own booze in.
The bands performances and events have been well documented over the years, the lead singer of Touch swallowing a bee for example. I don’t remember too much about Touch or Riot, second band on.

Next up were April Wine who I found a little boring, the exception being their rip roaring rendition of King Crimson ’21st Century Schitzoid Man’.

The Scorpions received the biggest cheer (so far) has they walked onstage. They were arguably the first band up that people had actually come to see having proved themselves to be an exciting live act. They were in the perfect place at the perfect time and played a blinder. Klaus Meine’s (Scorpions) introduction: Hello Donning Castle!!!

Judas Priest: Their latest album ‘British Steel’ had given them a new lease of life and won a new audience in the NWOBHM fan-base. They couldn’t fail, especially when Rob Halford arrived onstage riding a Harley. It was during this set when Halford hinted that this was to become an annual event…..

As for Rainbow: A few more pyrotechnics, an over the top drum solo (Cozy last with the band but not his last at Donington) an equally over the top guitar smashing routine and some extremely over the top fireworks at the end…..oh, and they added Stargazer’ to the set.There were all sorts of rumours about Blackmore playing a major solo on top of the speaker stacks way above the stage (as it happened this didn’t take place due to some mechanical lift failure apparently).Musically the highlight of the day (and probably of any day) was the way Rainbow segued Since you been Gone into Somewhere over the Rainbow and then straight into Stargazer (my favourite song ever) even though Graham Bonnet did mess the words up a bit. Cozy Powell’s 1812 overture drum solo went off with its usual bang and Blackmore’s (stage managed) setting fire to a speaker stack during his guitar onslaught finale were other fond memories of the headlining act.
1. Intro
2. Eyes Of The World
3. Love No Friend
4. Since You’ve Been Gone
5. Man On The Silver Mountain
6. Catch The Rainbow
7. Don Airey Intro
8. Lost In Hollywood
9. Ritchie Solo
10.Difficult To Cure
11.Don Airey Solo
12.Drum Solo – Cozy Powell
13.1812 Overture
14. Lazy
15.All Night Long
16.Blues
17.Will You Still Love Me Tomorrow
18. Long Live Rock’n’Roll
19. Kill The King (Instrumental)

All in all, the first Donnington festival was pretty bloody good and still stands high on my list. Due to the shape of the site everyone got a good view and there was the additional advantage of a big screen.