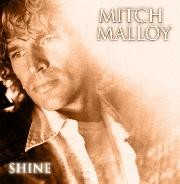 Italian edition of 2000 album for rock vocalist whos worked with Bystander & Warren Hill. Includes two bonus tracks, ‘Never Give Up On You’ & shadow In The Dark’. 12 tracks in all.

This album was going back to the roots of Mitch and back to the stylings of the first album. Finally free from the record company interventions that ruined “Ceilings and Walls”, he was able to make a better follow-up to his awesome début. The songs are all there.

This is a fine collection of melodic rock and much better than that awful second album. Good solid rock album. A few songs here could have even hit the charts given the right connections… perhaps in the same place where Shawn Mullins ‘Everywhere I go’ made whatever slight impact it did?

Been picking up Malloys albums in recent months & unusually I have picked them up in order,so was a bit wary of buying this one after the dreadful Ceilings & walls,but so glad I did. He is rocking out again! The song “Love Made a Liar Out of Me” appears in a movie

very good release by Mitch and i believe that this should be the right follow up of his cracking debut! Excellent melodies, accurate vocals. Highlights are “loves own hand”,”you lift me”,”it s about love”. Overall SHINE is a nice hard rock release

Not mellow but neither an extremely Hard Rocking/AORing one, I quite liked it though especially the tracks “Never Give Up On You” & “Shadow In The Dark” that are the best cuts in here and bring some essence of his début album one way or another…opening track “You Lift Me” it can lift you good surely!, “Its About Love”, “Love Made A Liar Out Of Me”(catchy), “Save Me”(rocks!), “Loves Own Hand” & “When I Try” are also pretty worth ones too…recommended stuff…85/100

Frontiers Records. You might remember this pretty boy from the video “Anything at All” which was played regularly on MTV Europe. (What a great song and video that was!!)

The song was part of his debut which was called “Mitch Malloy” and sold over 100,000 units. Not bad for a start ha? The second record, entitled “Ceilings & Walls”, took a mellower approach,(the record company’s idea unfortunately), in an attempt to break Mitch as an Adult Contemporary artist. Then Mitch moved from New York to Nashville to write songs under a publishing contract with Chrysalis Music and later he recorded this new rock album: “Shine” with guitarists Michael Thompson (Madonna, Great White and countless others), Kevin Dukes (Michael Bolton), John Jorgensen (Elton John) and Jerry McPherson, bass players Hugh McDonald (Bon Jovi) and Mike Brignardello (Giant), drummer Mickey Curry (Bryan Adams) and keyboard player Jeffrey “CJ” Vanston (Richard Marx and countless others). I have a feeling that this album should please his fans who will probably follow and welcome his progress and the mellowed down style of this album.