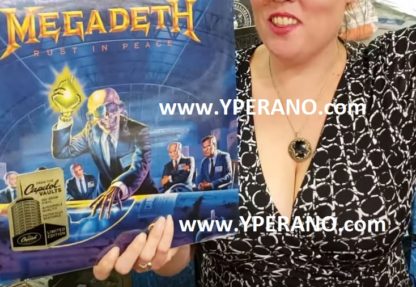 MEGADETH: Rust in Peace LP (No picture sleeve. This record does NOT have a sleeve) Check videos

No picture sleeve. This record does NOT have a sleeve, it has the inner bag though!

Rust in Peace is the fourth studio album by American heavy metal band Megadeth. It was released by Capitol Records in 1990. This was the first Megadeth album to feature guitarist Marty Friedman and drummer Nick Menza. According to “”National Album Positioning Charts””, Rust in Peace has sold 1,116,700 albums in United States.
Singles featured on the album include “”Holy Wars… The Punishment Due”” and “”Hangar 18″” both of which were made into music videos. The album was also nominated for Best Metal Performance at the 1991 Grammy Awards.
Rust in Peace is considered to be one of the greatest heavy metal albums of all time as well as one of Megadeth strongest efforts.
After being released from a twelve-step program, Megadeth frontman Dave Mustaine had hired drummer Nick Menza and guitarist Marty Friedman to record Rust in Peace, creating what would become the band first stable line-up, lasting to 1998. Bassist Dave Ellefson along with Mustaine remained from the previous line-up. Rust in Peace was produced by Mike Clink, who previously co-operated with Whitesnake and Guns N’ Roses. Clink job as producer contributed to the outcome of the record, with Mustaine being satisfied with the results.

The album name comes from a bumper sticker that Dave Mustaine, the band main songwriter, saw on the back of a vehicle. From an interview with Mustaine:
I was driving home from Elsinore… um, Lake Elsinore. I was tailgating somebody, racing down the freeway, and I saw this bumper sticker on their car and it said… you know, this tongue in cheek stuff like, “”One nuclear bomb could ruin your whole day,”” and then I looked on the other side and it said, “”May all your nuclear weapons rust in peace,”” and I’m goin’, “”Rust in Peace. Damn, that a good title.”” And I’m thinkin’ like, “”What do they mean, rust in peace?”” I could just see it now?all these warheads sittin’ there, stockpiled somewhere like Seal Beach, you know, all covered with rust ‘n’ stuff with kids out there spray-painting the stuff, you know.

IGN named Rust in Peace the fourth most influential heavy metal album of all time, after Metallica Master of Puppets, Black Sabbath Paranoid and Iron Maiden The Number of the Beast. 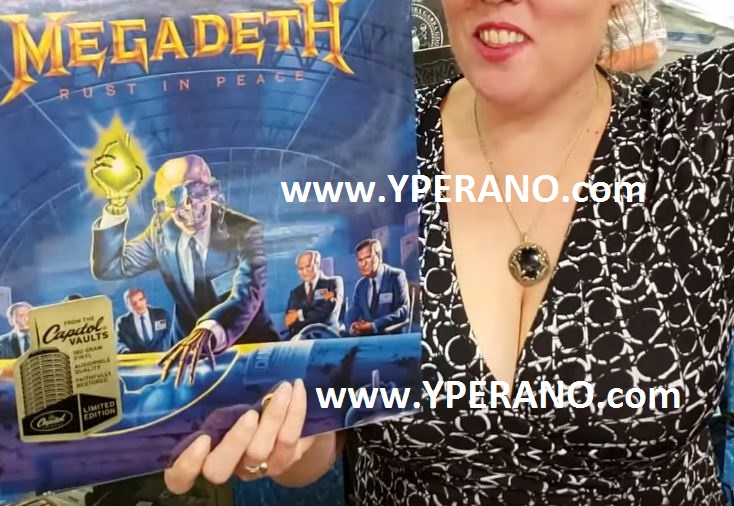 Be the first to review “MEGADETH: Rust in Peace LP (No picture sleeve. This record does NOT have a sleeve) Check videos” Cancel reply