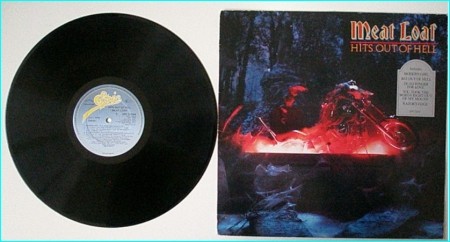 Hits out of Hell is a 1984 compilation album by Meat Loaf. It includes 7 Jim Steinman songs and its original release featured the hit, “”Modern Girl”” off Bad Attitude , which came out at about the same time. Meat Loaf never liked that he never had any say in these compilations and numerous others soon followed in Hits out of Hell footsteps.

5.0 out of 5 stars If you’re to get Meatloaf.. GET THIS ONE!
I’m not going to go on about how outstanding this collection is, because you all should know that. I am just going to say that if you want to nuy a Meatloaf CD.. GET THIS ONE. ‘I would do any thing for love’ aside. It has all his best tracks.
Bat Out Of Hell – 10/10 : If you haven’t heard this track before, it is the most interesting piece of music you will ever hear. MeatLoaf is most famouse for this song, and rightly so, its a mammoth 9-10 minutes long and you won’t want to turn it off even if, like me, you’ve heard it hundreds of times. Jim Steinman is a legend.
Read ’em And Weep – 9/10: This song takes a good 3 minutes before its at its best. But at its best, its better than any on the album.
Midnight At The Lost And Found – 7/10: I have to say my least favourite. I cant say why. It may be different for you though.
Two Out Of Three Aint Bad – 9/10: Some say this is the best rock ballad of all time…. And i’m not going to argue with them. You dont hear the big build up, or the huge meat loaf voice, but the song is excuisite.
Dead Ringer For Love – 9/10: Fast, catchy and great! Cher does at great job. Her and Meat are in and out of lines like no other song ive ever heard.
Modern Girl – 8/10: Again, not the best track but a solid tune. Not much to say about this one really..
I’m Gonna Love Her For Both Of Us – 10/10: My personal favourite. Huge voice, Huge build up (the opposite of ‘two out of three ain’t bad’) and a Huge song. Lyrics aren’t the best but the music playing is awesome. I cant find any more superlatives to throw at this one.
You Took The Words Right Out Of My Mouth – 9/10: I wouldn’t have been surprised if he released this one at Christmas with this ring. Great feel-good song.
Razors Edge – 9/10: Another one of my favourites. This track is consistent all the way through.
Paradise By The Dashboard Light – 10/10: wow.
wow.

5.0 out of 5 stars SOME OF THE BAT AND MORE
The criticism against the Loaf is that his brand of theatrical rock is overblown rock, but what counts is how the melody and the words come together, in any popular musical genre. Rock is anyway known for excess, and that includes Alice Cooper, Queen and Marilyn Manson. I love Meat Loaf on the soundtrack of the Rocky Horror Picture Show and I love his solo recordings. This hits collection includes five hits from the zillion selling Bat Out Of Hell album: the title track, Two Out Of Three, All Revved Up, You Took The Words and the mini-operetta Paradise By The Dashboard Light. The rest of the songs is of the same quality – blistering melodic rock – and my favourites include Midnight At The Lost And Found, Iâm Gonna Love Her For Both Of Us and Dead Ringer, on which he duets with Cher. Thereâs no substitute for the BOOH album though so I recommend you get it. It remains a classic of dramatic overblown theatrical rock with each song a classic. For those who want a wider selection of Meat Loafâs late 70s and early 80s output, this album is ideal.

5.0 out of 5 stars A good summary of Meat Earlier Work.
This compilation gives a good review of Meat Loaf work from the 70s and early 80s. The classic Bat Out of Hell which really needs no explaining and Paradise By The Dashboard Light is also another classic from The Bat Out of Hell (BOOH) album. About half the tracks come from BOOH, because other than this album he did not have many more hit songs in his early years, although Dead Ringer for Love, a duet with Cher, was one of his more well known songs. Modern Girl continues along the theme of an operatic , bombastic style of music. Read ’em and weep is more mellow and emotional and is another fine tune. Interestingly enough this CD is not completely written by Jim Steinman, the songs from BOOH are his but some of the others were written by Meat himself and other song writers. This CD provides a good opportunity to buy most of the decent stuff from Meat, without having to buy the complete albums which may not be completely to your taste if you are a casual listener. A recommended buy. Do not buy this and expect to hear hits from after 1985 as all material on in this, is written before this date.

5.0 out of 5 stars his best together.
any meatloaf fan would love this album. Just put it on and turn up the volume.
I had to attend a speed awareness course a couple of years ago and the tutor said that the one album you must not have in your car is Meatloaf!!!!!!”

Be the first to review “MEAT LOAF: Hits out of Hell [Best of LP] Check videos.” Cancel reply 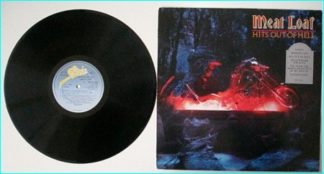 You're viewing: MEAT LOAF: Hits out of Hell [Best of LP] Check videos. £2.99
Add to basket