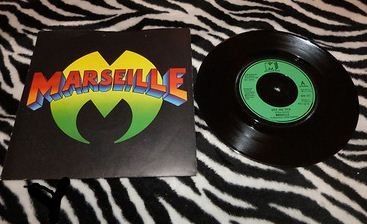 MARSEILLE: Over And Over 7″ NWOBHM (3 songs, one unreleased elsewhere). 1979 Check audio

MARSEILLE – OVER AND OVER 7″
A1 Over And Over
B1 You’re A Woman
B2 Can Can (unreleased elsewhere!!)

Marseille: Forgotten Pioneers
Holy shit! How did this band ever elude people for so long? Years of NWOBHM hunting and collecting, and they only found out about this band. Musically they were incredibly successful, productive and Awesome. This isn’t the ass kicking, balls out NWOBHM brand associated with Saxon, Avenger, and Savage. Quite the opposite what we have here is more closely related to the Weapon, Snowblind, Praying Mantis, melodic style. Unlike some of the acts from this softer sub-strata however, Marseille kicks a bit of butt, and has some cool crunchy riffs to the point of probably not being a turn off to your more metal purist types. In fact, its kinda in between these two polar NWOBHM camps sometimes hitting the hard riffs, and often incorporating soothing vocal melodies. And lets not forget the early date of this stuff. Pretty cool how these guys were basically one of the pioneering NWOBHM acts really, yet you never really hear about them. Time for some praise! I chose this single first, as its still early (1979!), though not their first (but better than their first).

Basically, this is three tracks of kinda unique, fun, upbeat NWOBHM. Theres even a bit of genuine metal feel to it. Enter the French themed Can Can. While this one does posses some cool power melody not unlike Kraut melodic heavy metallers Bonfire, it also has a cool nastiness to the riffs and a venomous tinge courtesy of the vocals of who I think is Sav Pearce (on this release). This one has pretty sleazy lyrics to it (again the Cacumen comparison) and a definite bite which is always welcome. The title track is much more of a 70s British pop rock kinda vibe. Soothing, yet well layered and powerful vocal harmonies feature heavily in the track. Its pretty catchy, has good guitar solos, and gets the job done. I prefer Can Can to the other two (it has the most balls) but Youre a Woman isnt without its oversexed charm. Simple chords here rock along like something that wouldn’t be out of place on a Savage album. Love the lyrical content about schoolgirls, tight jeans, and sleazy sex.
Quality stuff that deserved a nod, and a good starting point for newcomers, too.

Marseille was a Hard Rock band from Liverpool, England, who originally called themselves AC/DC.

They changed their name to Marseille in 1976, with the arrival of the Aussie rockers on UK soil and released their début album, Red, White and Slightly Blue on the Mountain label in 1978. Members included Paul Dale (vocals), Neil Buchanan (guitar) and Steve Dinwoodie (bass).

Their second release, the eponymous Marseille received airplay on local-radio, extending their fanbase. However record company issues and disinterest in the band caused Marseille to split-up after their third, and final release until their reformation, Touch The Night.
—————————————————–

Be the first to review “MARSEILLE: Over And Over 7″ NWOBHM (3 songs, one unreleased elsewhere). 1979 Check audio” Cancel reply 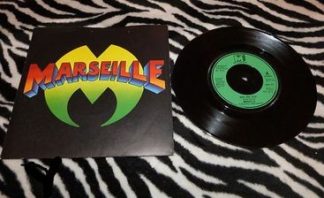