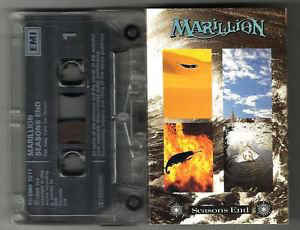 Seasons End was the first album recorded by Marillion after the split with Fish in late 1988. The band started to audition singers while writing the new album, and they eventually chose Steve Hogarth, former keyboard player and singer in The Europeans (released two albums).
Seasons End was mostly finished by the time Hogarth joined Marillion, and only a couple of songs on it actually have some pieces written by him, most notably Easter and The Space. The first single to be released was Hooks in You in August 1989, followed by The Uninvited Guest in November and Easter in March 1990.

The first ever concert with Steve as the new lead singer was in a small pub somewhere in Aylesbury. The band wanted it to be some kind of rehearsal before going out on the world wide tour later that year. The band put out the word that they were going to do a small gig for only a couple of people in the pub, and when they arrived on the day of the gig, they quickly found out that a lot more people had found the venue than they had anticipated. The crowd was so big that the band actually had to climb out of the back window when the gig was over because the crowd had no intention of letting them slip out. This was the first positive experience Steve had with the band, and from there on, things only improved. The band opened their tour in a sold out venue in Paris later that year, and through the concert, the public were so loud with excitement and cheering that the band actually had to wait in between songs for them to settle down a bit.
The new frontman was fully accepted by the fans, and the Seasons End Tour is the biggest tour Marillion has done with Steve as the band singer.

MARILLION: No One Can + A Collection. PROMO 7″ Check video

MARILLION: Cover My Eyes (Pain & Heaven) 7″ + How can it Hurt (both songs are excellent

MARILLION: No One Can 7″ + Cover My Eyes. Check videos.

MARILLION: Punch and Judy 7″ [Unreleased B side Three Boats Down from the Candy] FISH. Check video + AUDIO.