Madman play instantly memorable tunes that sound somewhere between metalcore and Swedish thrash.This EP showcases their various influences while never copying: opener ALL THAT REMAINS kicks off a Slayer-esque riff before leaning into the familiar Madman sound. DIALAPSYCHO has a whiff of At The Gates. Melodic interlude SERENITY sounds like a classic Testament intro.2839 puts me in mind of Darkane. Closer WATCHING THE DEAD WALK THE EARTH could be described as “Meshuggah-tastic” while “classic Madman” could sum up ALL IN ALL and VISUALISE AND ATTACK, the latter you will recognize as an established live favourite (notice that some of these tracks are even faster when played live.) The packaging is neatly done as well. The band have been receiving some media attention recently which is well deserved as this CD is easily the best thing I have heard from this or any other underground scene 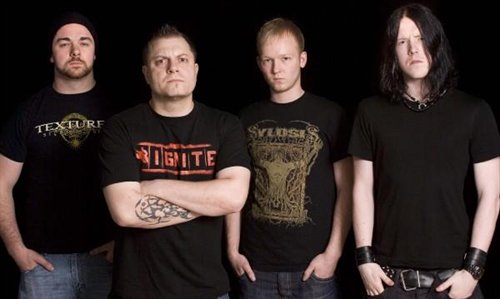 taken from my Raw Nerve website….
What can be said about such a magnificent band, that isn’t going to sound contrived and over-the-top?
Basically Madman is Absolute have thoroughly already proven to me why they are one of my favourite ever bands, with some great live performances and previous recordings, and everything comes together truly perfectly on this EP.
“All that remains” is as impressive as any God Forbid moment, with some marvellous grooves, unbelievably metal riffing, some great open noted chugging, great subtleties and touches in the drums, hi hats and cymbals especially, great dynamics throughout. A very strong vocal finishes things off well, but all this is not the main thing to comment on. Its how ridiculously tight they are. Most noticeable when there are chuggs, overlapping polyrhythms and when the grooves kick in.
Combine together the mighty God Forbid, The Haunted, Candiria and Meshuggah, Arkangel, and you know there is going to be a vicious monster jumping out of the mixing pot, and that monster is indeed Madman Is Absolute.
Every song stabs and kicks you in the face, and there are certain moments which are just too good to be allowed, such as from the two minute mark in “Dialapsycho” right through to the end, with some harsh chords, amazingly massive guitars and riffing in general, and then all of a sudden comes into the beauty of the track “Serenity”, before the truly insane “2839” proves beyond all reasonable argument that MMIA are not messing about. This is probably one of the best songs any British band has ever recorded in my opinion, some of the most monumental Meshuggah-style patterns have me almost wetting myself.

extreme challenging metal
One of the most consequential bands of Scotlands metal scene, Madman Is Absolute are finally getting the respect they deserve through this self-funded seven track EP released through vocalist Tony Newalls own Hardface Records.
Described as many as sounding very similar to Swedens At The Gates and the masters of complicatedness Meshuggah, their style is a unique mix of death, thrash and hardcore. We wanted to create something groovy, but retaining the jazz-type timing: trying to blend it all together without sounding too wankerish notes Tony. MIAs previous Blueprint for Nihilism demo and two tracks recorded for a Dethlehem promotional CD were true gems, played live however these tracks sounded far better, continually developing and striving towards the precisely timed machine that exists today.
This release finally does their ability justice. Opening track All that remains grinding assault sounds legendary old school metal (keep your nu-metal pish). Dialapsycho is one of the heaviest songs I have heard recently David Sandfords unmatched and relentless guitar work leads the band in its stunning performance and sounding like Tony is tearing his throat apart. Serenity is melodic and gentle, solely guitar leading into the searing and jaggy sounding 2839. With guest vocals on Visualise and attack this familiar song from live sets is not so much refined but brutally executed. All in all is breakneck fast -think Stampin Ground on speed and with Watching the dead walk the earth things just get ridiculously good this is nothing other than exceptional talent. This is recommended listening. If you like metal and appreciate stand out music; trust me get this CD.