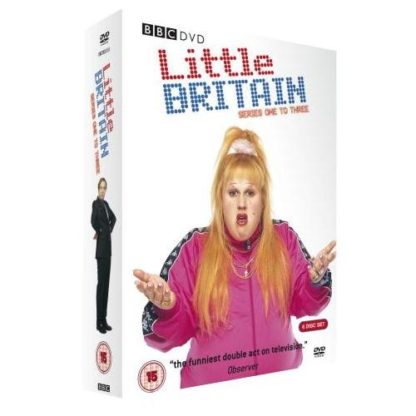 Little Britain was the injection that the British comedy sketch-show needed. Matt Lucas and David Walliams have created a host of bizarre characters on a surreal but hilarious tour of the British Isles and its curious inhabitants. Narrator Tom Baker adds insightful and eloquent comments throughout the odyssey!

All of modern Britain is here, including favourites such as Daffyd, the only gay in the village; Jason, the teenager with an unhealthy attraction to his best friends granny; Marjorie Dawes, the terrifying Fat-fighter group leader and Emily Howard, the rubbish transvestite who likes doing ‘ladies things’.

———————————————————-
The new British comedy…
Comedy has changed quite a lot. We can getaway with a lot more outrageous stuff and there an no exceptions when ‘Little Britain’ is involved. From characters like ‘Vicky Pollard’ the hilarious moody teenage chav, to ‘Emiy Howard’ the very bad transvestite. This is a must have for any British-Comedy fan and for £10, its a bloody bargain!

This started off as a briliant and fresh new comedy. Series One is really funny and I could watch it over and over again. The characters are great and very funny. However it begins to deteriorate as it progresses and the new characters in the later series are predicable and silly. I would defiantly recommend the earlier series.

———
Best Comedy in Ages
Little Britain was breath of fresh air when it came out & made me laugh more than i had done in a while. Brilliant charaters & episodes. They are truly two gifted & talented men!