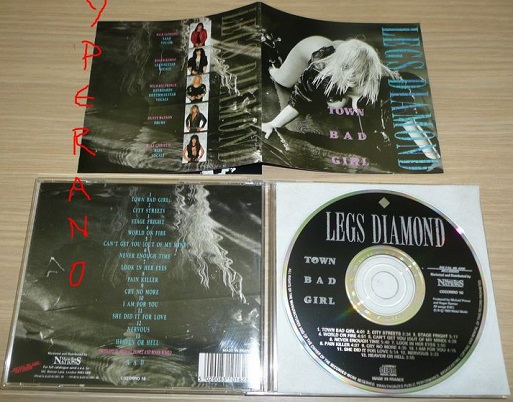 Hard Rock band that started in the 1970s and their albums were supposedly pretty good. Through some research, I noticed that TOWN BAD GIRL is out of print and going for decent dollars.

This album is a fine slice of Hard Rock in 1990, probably one of the better albums released that no one really knows about. Youve got good performances by all the musicians and the instruments compliment each other without taking over. For the most part, the keyboards compliment and work with the guitars and the rhythm section holds it tight. This is obviously an experienced band that has mastered their craft over the years.

What is most striking is singer Rick Sanfords voice. There is a familiarity to it, youve heard it before and its good. Comparisons to Mark Slaughter (Vinnie Vincent Invasion/Slaughter), Tony Harnell (TNT), Stephen Pearcy (Ratt), Axl Rose (GnR) and Vince Neil (Motley Crue) can be made but I would roll them all into one as Sanford sounds like one or the other as the songs change. Sometimes he sounds like more than one: on Stage Fright he sounds like a Slaughter/Harnell combo. Sanford has a great voice for 80s Hard Rock.

The first four songs are excellent, very solid. Town Bad Girl and City Streets remind me of Def Leppard meets Ratt with the big gang vocals on the chorus. Both excellent uptempo rockers that grab the listener and immeadiately sucks them in. Stage Fright is actually a cover of themselves, the original located on the first Legs offering in 1977. Ive never heard the original but the updated version smokes. World On Fire has a little more keyboard but it is another solid Rock song. Never Enough Time is the first ballad of the record, not sure how this missed radio in 1990 but it would have sat well alongside ballads of the time. My favorite song of the album is Look In Her Eyes, this should have been a big hit. Nice riff and complementing keys with Sanfords vocal grit, and I really like the guitar solo. Its the chorus that hooks you in and makes you want to sing along.

Pain Killer is a mid-tempo rocker that has some groove but its ruined by the keyboards. Sounds like a Ratt song. It has that dirty, gritty stomp but the power is deflated with frilly keys, take them away and its a great song. Good solo though. Another keyboard heavy song is Cry No More. More AOR/Pop Rock, something I could see John Waite singing in Bad English. All is forgiven when the opening guitar to I Am For You kicks in. Its similar to Look In Her Eyes and sounds like something Tony Harnell would have had on a TNT record. Its aimed directly at Rock Radio in 1990 and it was the first single and video.
Nervous kicks the album back into high gear with arguably the fastest, and hardest, song on the record. Sanford does a great Axl Rose/Mark Slaughter combo and the guitars are blistering. Should be located at the top of the tracklisting instead of being buried after the filler. Heaven And Hell has a KISS vibe, sounds like a Gene Simmons penned tune from ASYLUM or CRAZY NIGHTS.

Bottom Line:
Overall, a solid Hard Rock album with some great songs and some top performances. The overall feel and sound of the album is really solid. How this band didnt do well is beyond me because they are very good. This album has me looking into the rest of the Legs Diamond catalogue. Favorite tracks: Look In Her eyes, Town Bad Girl, City Streets, I Am For You, and World On Fire.

5.0 out of 5 stars classic rock,
I picked this CD up through my import buddy and much to my surprised it was very good. In places it does sound a little like Def Leppard but it mainly has it own sound. From pain killer to bad town girl nervous this is a rocking album i am very impressed with this.

5.0 out of 5 stars Return of Romeo,
What a great CD by Hollywoods Legs Diamond. This Cd marked the return of original guitarist Roger Romeo, who may not be on lists for great guitarists, but trust me he is. Without my collection in front of me I can’t say for sure, but I believe this may have marked the return of original drummer Jeff Poole, also. Hes not Neil Peart, but he is an excellent drummer of the caliber of Joe Dube [Starz]. The singer is still Rick Sanford and the keyboards/guitars are Michael Prince. Despite never having tremendous airplay, sales, or label support these guys are one of the best bands from the mid ’70s to the ’90s. You can’t go wrong with a Legs Diamond CD, except for possibly “The Wish”. “Town Bad Girl” is one of their best releases and ranks with “Firepower” for pure energy and sustain [no matter how many times you play it or how much time has passed, it still rocks!]. Killer tracks are Town Bad Girl, a remake of Stage Fright, Can’t Get You Out of My Mind, Painkiller, I am For You and Nervous. From ballads, to classic rock, or hard rock Legs Diamond is a band that has what it takes. Great musicians, exceptional lyrics, not too overproduced, energetic, not mainstream, but sounds like they should have been. Discover one of Americas best kept secrets. If you’d like a better starting point you may try Favorites, which has a sampling of most of their released CDs. Definitely recommended!!! You will want more!!!