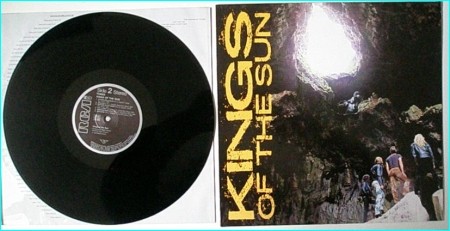 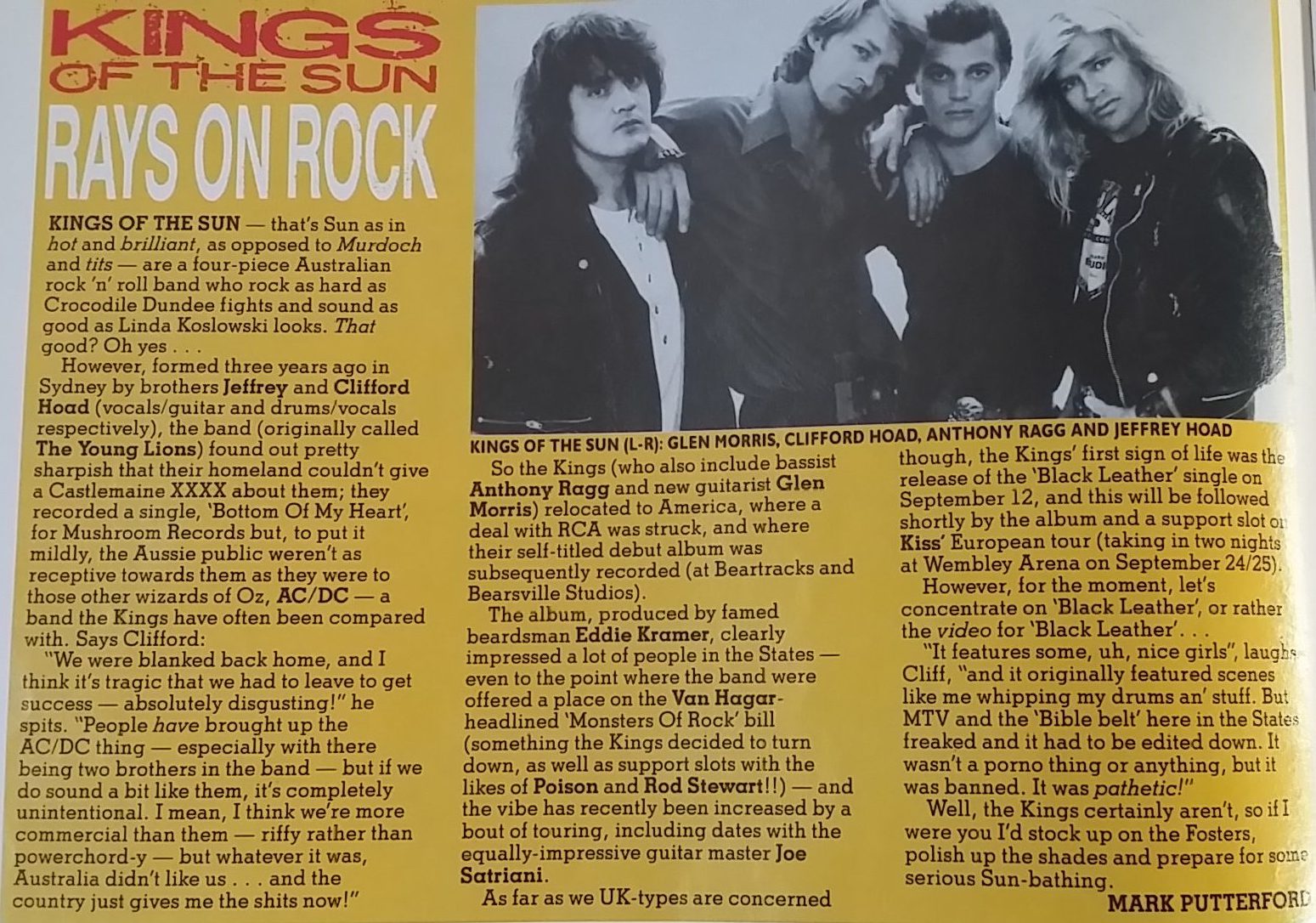 Kings Of The Sun were an Australian band assembled around singer/guitarist Jeffrey Hoad and his brother, drummer Clifford Hoad. With Glen Morris on guitar and Anthony Ragg on bass I first became aware of their talents when they supported Kiss on the UK leg of the Crazy Nights tour. Even now I can recall the cocksure presence of Jeff Hoad as he lead the band through an impressive set of rock n roll Aussie style. Indeed I’m still surprised that he never achieved greater fame either with this band or in his own right. The Kings managed just two more albums after this although the Hoad brothers are back in business again with the band “The Rich And Famous” so who knows, maybe success will come?

Serpentine, the opening track on the debut album is very much a scene setter for the whole shebang. A huge bar-room rocker with distinct similarities to Georgia Satellites albeit with a definite Aussie flavour prevalent in the introduction. The excellent Get On Up displays very similar attributes as well and despite being a little lighter boasts some great boogie-rock guitar through a damn catchy song. Track three, Black Leather achieved a fair bit of MTV Europe coverage as I recall when it was lifted for a single release over here and although it failed to produce a hit it is probably their best known track in the UK. The video featured a suitably clad female and gave Jeff Hoad’s faintly Jim Morrison crossed with Billy Idol  like demeanor a platform to deliver a cracking song with a huge singalong chorus, rocking solo and a slight AC/DC flavour about the stop/start lead guitar. A memorable song that really could have been a big live number for them yet I can’t recall them visiting these shores again after the Kiss tour.

Tom Boy is a similarly raucous rocker that takes an imaginary mid ground somewhere between fellow countrymen INXS and AC/DC with Hoad the frontman sounding a little like Bryan Adams at his rocking best here. Hot To Trot also boasts a distinct AC/DC guitar sound rumbling along behind the verses in classic  Young  style before a ballsy solo. This is followed by the accomplished yet again somehow typically Aussie Rock  sounding Vicious Delicious marking the centre point of the album with another air-punching stomper.

Jealous changes the sound a little becoming somewhat deeper and more bass heavy with a riff that reminds me of ZZ Top circa Eliminator. Another big vocal performance by Jeff Hoad defines the track for me whilst the solo has a touch of Status Quo about it. Following this is the decidedly more commercially friendly and slightly slower tempo number Bottom Of My Heart. A song that initially gave the band it’s breakthrough and the sort of pop-rock that often seemed to crop up as backing music in the Aussie soaps it was catchy enough to secure the band a top 20 hit in their native country and has always been a favourite of mine. This could so easily have been a hit over here if it had a push. There’s a couple of examples of where Aussie pop-rock has captured the British ear in the past, (remember Mental As Anything or Men At Work a few years earlier?) and although this is slightly harder it’s not that far removed from either bands hit.

Cry 4 Love is the album’s nearest thing to ballad territory adding a bit more polish to the sound and slowing things down somewhat, with some lovely ringing guitar complementing the verses. Aboriginal drums and chanting herald a return to the rock n roll and the superb Medicine Man before Bad Love ends the album in what has quickly become established as hard, heavy and flamboyant Kings Of The Sun style rock n roll. It’s big, bad boogie rock that really demonstrates what great potential this band once had.

So why didn’t  they conquer the world, or even their own country for long? Well it seems the flamboyance and attitude of Jeff Hoad went a little too far on stage at Sydney’s Entertainment Centre when during a prize support slot backing Guns N’ Roses he chose to drop his trousers to the audience and bad-mouth the headliners! True rock n roll front-man behaviour yet unfortunately it appears to have subsequently switched off the home market somewhat. From then on it was a downward spiral of decent but increasingly hard to attain albums and revolving door membership. A final support slot to Sammy Hagar in 1998 appears to be the final entry in the Kings story save for the odd reunion rumour that I guess will depend on the success or otherwise of “The Rich And Famous” venture.

Summary : Whatever the opportunities lost by this band this album remains a more than decent example of good time, bar-room rock n roll done Aussie style and done well. There are a few excellent tracks on this album, one of those albums you can just stick on and always enjoy. The likes of Serpentine, Black Leather, Vicious Delicious and Bad Love are great examples of this band ability to play great commercial rock whilst Bottom Of My Heart is a piece of pop-rock perfection. Unfortunately they seem to be another example of where attitude got the better of artistic ability but for me they provided a memorable live show and a debut album that will always get regularly played as a result.

If You Listen To One Track Listen To : Black Leather” 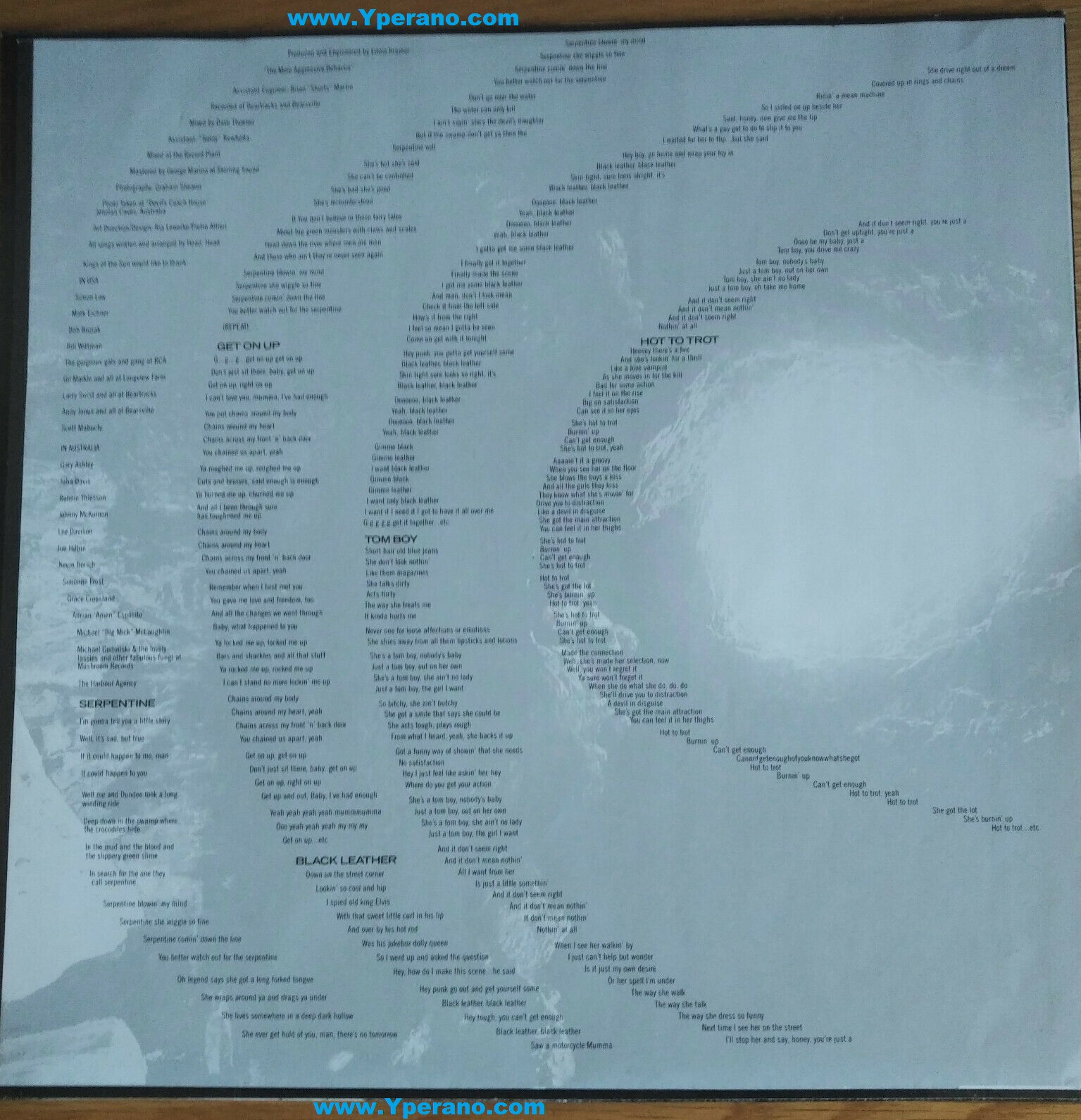 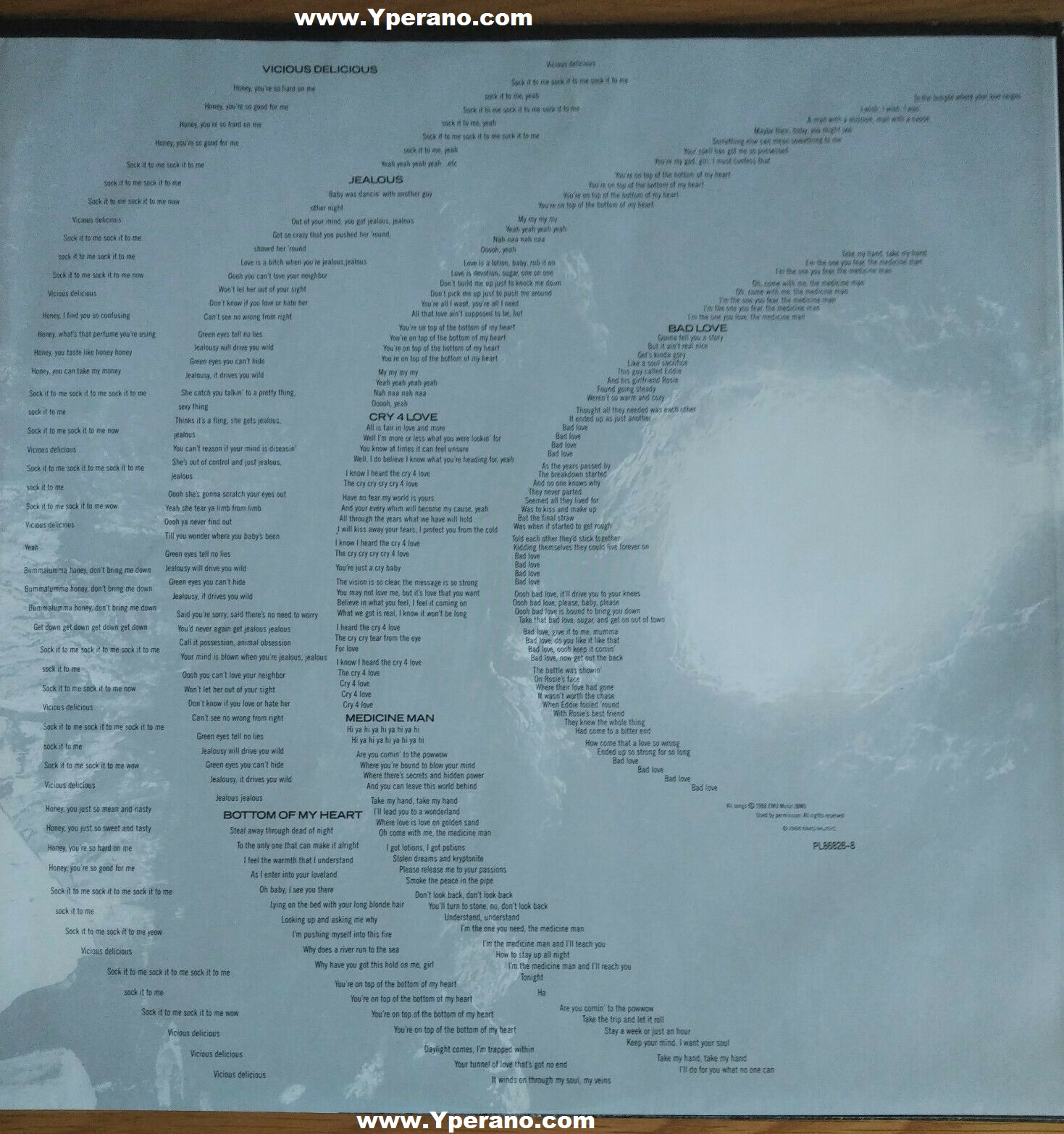 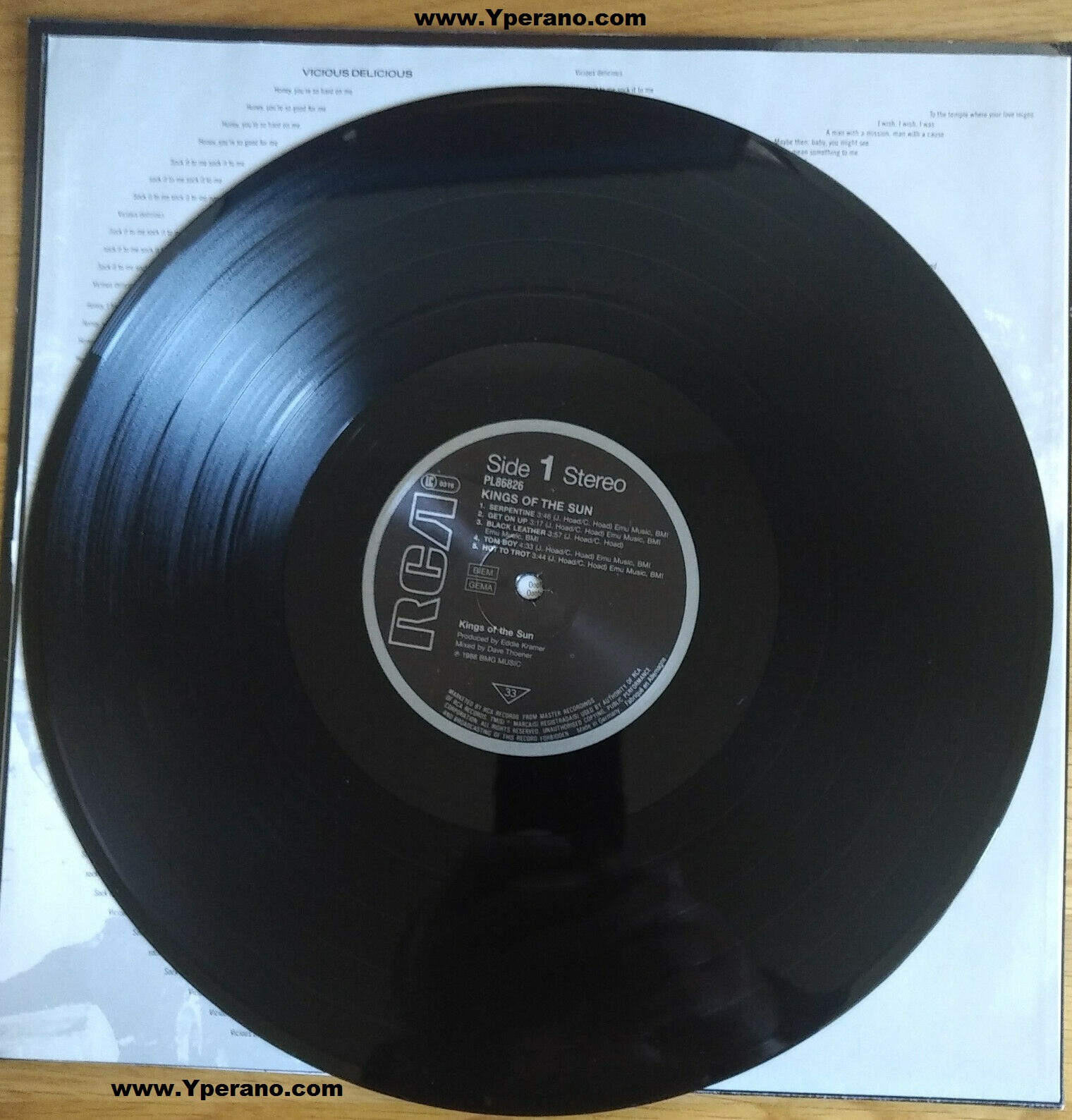 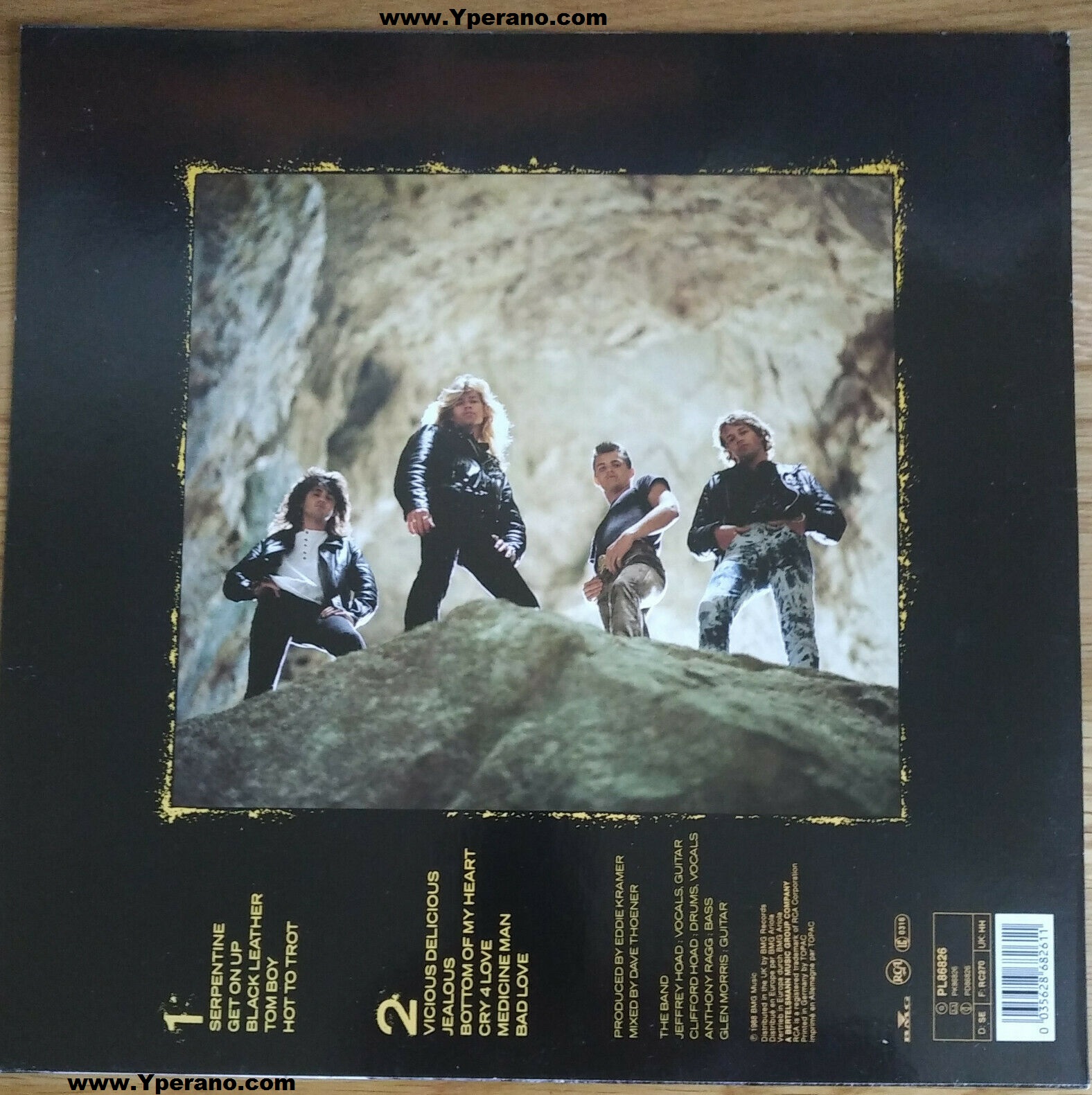 Be the first to review “KINGS OF THE SUN LP 1988 Check videos of “Serpentine”, “Black Leather” and audio (whole album, all songs) Top Australian Hard Rock For fans of AC/DC” Cancel reply 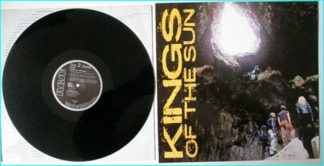 You're viewing: KINGS OF THE SUN LP 1988 Check videos of “Serpentine”, “Black Leather” and audio (whole album, all songs) Top Australian Hard Rock For fans of AC/DC £9.99
Add to basket