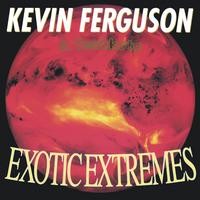 KEVIN FERGUSON: Exotic Extremes [Ferguson’s latest CD release, “”EXOTIC EXTREMES,”” includes fiery traditional tunes from gypsies and others from lands of the former Ottoman Empire (the Balkans and Middle East) transcribed for and performed on a electric guitar. Classical violin
music performed on electric guitar, the transcriptions are true to the melodies, ornamentation,phrasing, etc. For the last few years Kevin has performed the music on this CD with the ensemble “”Teshkoto,”” which has consisted of Chris Golthorpe on bass, Craig Carney on drums and Michael Beach (Brothers of The Baladi) on native percussion (tapan, dumbek, etc.]. Music of EXOTIC EXTREMES Includes (more sound samples to be added in the
next few weeks):

The time signatures follow the origin of the track titles listed above. The odd time signatures (for example 11/16, 7/8, 7/16, etc.) are mostly a result of following the rhythm of corresponding folk dances. The above traditional dance and folk music was arranged for and rerformed on electric and acoustic guitars (Kevin Ferguson), bass (Chris Goldthorpe) and native percussion & other instruments. “”With this CD, Ferguson has reached new musical peaks.”” — Vtozos, Guitar Nine Word of Mouth
“”Exotic Extremes is a lively, colorful musical rendezvous for World Beat fans and guitar enthusiasts alike.”” — Robert Silverstein, MWE3.com

Kevin Ferguson & Teshkoto – Exotic Extremes
There was five-year break between Ferguson’s debut and its successor. The thing is not that Kevin was lazy! He turned out to be a musical globetrotter travelling through the historical territories of the Ottoman Empire (ruled by the Turkish dynasty from the 13th century to its dissolution after World War I). One of the most important aim of these peregrinations was learning about musical traditions in other countries. Kevin learned the basics of foreign languages, local dances, regional history and a taste of dishes then. The result of Kevin’s musical and cultural experiences is “”Exotic Extremes””. This stuff includes traditional dances and folk music that was transcribed for electric and acoustic guitars (Mr. Ferguson) and bass (Chris Goldthorpe). Craig Carney was the one who accompanied them on concerts. Kevin, together with his band Teshkoto (its name comes from the most popular dance in f.y.r.o.m), played national music of those (contemporary) countries that were under the reign of the Ottoman Empire in the past, that are: The Former Republic of Macedonia, Republic of Bulgaria, Republic of Serbia, Romania, State of Israel, Republic of Iraq and, generally, territories of the former Persia (a terrain around the Euphrates River). That’s not all, he also has had an opportunity to learn folk music from Republic of India, Islamic State of Afghanistan, Islamic Republic of Pakistan, People’s Republic of China, Japan, Socialist Republic of Vietnam, Arab Republic of Egypt, Republic of Ghana, Socialist People’s Libyan Arab Jamahiriya, territories of the North and South America, the Baltic countries and Celtic ones (especially Ireland) etc. Obviously, it would be impossible to push all his ideas in one disc only, so Mr. Ferguson decided on recording ethnic music from the Balkan Peninsula, the Middle East and Egypt. The nations living on these territories are known for spontaneous temperament, and it is audible in their music. Therefore, it isn’t strange that most tracks from “”Exotic Extremes”” are lively and really fast. The most immense advantage of this stuff are regional drums and different, but poorly known instruments the likes of: Macedonian gajda, Bulgarian gajda (a kind of bagpipes), gadulka, kaval (a flute a.k.a. duduk), tambura (the Balkan lute), flute, saxophone, clarinet, lute and zurla. My very favourite tracks are Macedonian “”Revisko Oro””, Bulgarian “”Daichovo Oro””, “”Balkan Melody”” and Serbian-Romanian “”Kukunjesce Kolo””. Why did I choose them as my faves? Since they are a proof that a folklore can be raised up to the virtuosity importance! Only the most outstanding artists, like Mr. Ferguson surely is, are able to manage to do it! The highest reverence!
Exotic Extremes is FANTASTIC

Exotic Extremes is an incredible CD and deserves MUCH more praise and recognition and hype than itâs received thus far. For all intents and purposes, it is comparable to the groundbreaking work of Shakti-era McLaughlin, in terms of the seemingly limitless possibilities of the guitar. Just the idea of taking these beautiful, traditional dance and folk gems and (somewhat) rearranging them for an electric rock guitar, is way cool and way overdue. And to my mind heâs absolutely the first to do it with such an obvious degree of success. The music of Exotic Extremes is performed by Kevinâs trio ensemble, known as Teshkoto, featuring Chris Goldthrope on bass and percussionist Craig Carney. Teshkoto is also the name of one of the more ripping tunes on the record – a FYROMian 4/4 to 7/4 piece, sort of sounding like an Eastern European instrumental folk-dance version of Tool. Itâs an ultra cool and infectious tune. The repertoire and song selection is exquisite, ranging from Bulgarian to Egyptian to Serbian and beyond. The tunes, while possessing beautiful and engaging harmonic and melodic content, also tend to integrate the rhythmic complexity of such groupings as 7, 9 and 11 beats/measure. Kevinâs phrasing is ultra elegant, virtuosic and seemingly flawless. Much of this repertoire, according to the guitarist, was learned by ear- an unfathomable feat in and of itself. Kevinâs interpretation and rendering of these traditional pieces is nothing short of brilliant. The playing is so complex and virtuosic that is too damn difficult to even play air guitar to. Please be smart and wise and pick this record up immediately. Ken Rubenstein