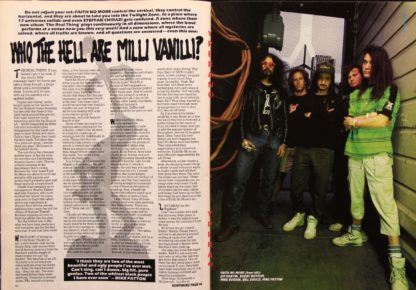 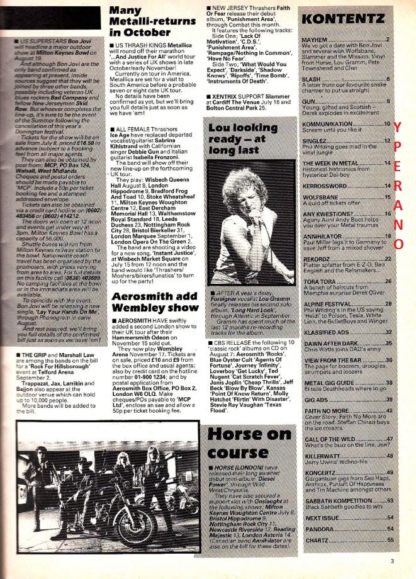 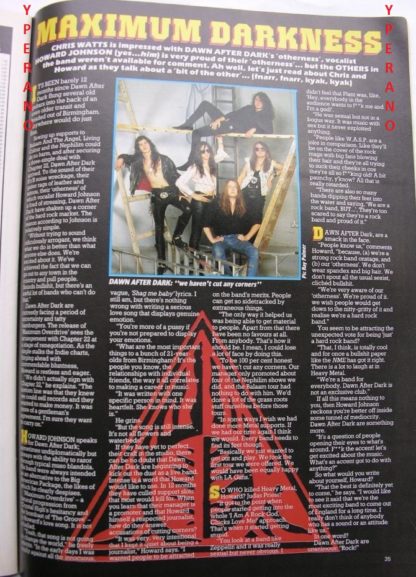 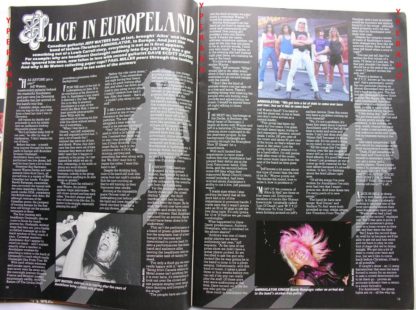 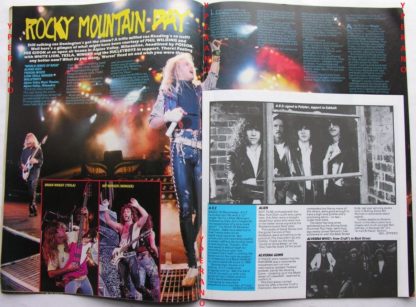 KERRANG – No.246 1989 Faith No More on the cover inside there are features on Faith No More, Gun, Annihilator & Dawn After Dark N.W.O.B.H.M SPECIAL

Kerrang – the longest running and most famous UK Rock and Heavy Metal magazine. These mags have now become ultra collectable pieces of music memorabilia and have featured some of the biggest and smallest names in Rock/HM.
Buy a piece of rock history today!!!!!

CHECK: ………detailed LIST OF Faith no More TITLES below…

Melody Maker. On the Other Hand-there’s a fist. Brawls,bust ups, bizarre enocounters with Ozzy Osbourne, Faith No More, etc

Frantically seeking the next Guns N’Roses after Appetite… exploded, the major labels cannibalised themselves with fake gypsies’n’outlaws. From the Bay Area, Sea Hags should have been the golden challengers if they hadn’t been even more self-destructive than their glorious peers. Mixing Aerosmith, Dead Boys, goth, psycho and a bit of The Cult in their sleazy rock’n’roll, Sea Hags recorded one beautifully dangerous LP. At the very end of the 80’s, were there any more exciting tunes than Doghouse or Too Much T-Bone? Instead Winger and Nelson shone on Dial MTV. At this point, Sea Hags’ toxic legend precedes them, but even in 1989, everybody knew these dudes were doomed. Even they knew it. Every step on their shockingly brief trip to semi-stardom was fraught with peril, and their eyes were always too blurry to see the headlights coming right for them. With the possible exception of Rock City Angels (a long and tragic story for another day), nobody was ever gonna be the “next Guns N’ Roses”, although a lot of bands got saddled with that unfortunate tagline, including these dudes. Are you kidding me? You can’t just invent another Axl Rose, man. If anything, Sea Hags were the Guns N’ Roses that couldn’t afford rehab. That’s the terrible beauty of it all, really. This band is what happens when you attempt private-jet decadence on a blue-collar budget: it kills you, and before that, it makes you suffer.

But let’s rewind a little. Sea Hags were formed in Seattle in the mid-80’s. They fucked off to San Francisco soon after to seek fame and fortune. With the benefit of hindsight, that seems like a terrible blunder, seeing as Seattle was just a couple years away from becoming ground zero for all things loud and druggy. But whatever. While their style of sleazy hard rock lined up neatly with the glam-metal waves washing over California at the time, they weren’t just goons wrapped in velvet. They knew what was up. They liked the Pistols and the Stones, and they played with The Cramps and Motorhead. They were as close as an American band could get to the legitimately debauched glam of bedraggled Brits like the Dogs D’Amour, Quireboys, or Rene Berg. And they had cool friends: Kirk Hammett produced their first demo, and Ian Astbury almost produced their first album. They eventually went with Mike Clink, who orchestrated the relentless scuzzy chug of their debut in ‘89.

They hit the road with the Georgia Satellites soon after, and life was good. For a month or so. But the band was rife, lousy, basically crawling with addicts. A lot of flash metal bands had one or two boozers or drug-abusers on board, but even GN’R figured out how to maintain on tour. Sea Hags, forget it. The road utterly destroyed them. They were finished within a year. As their manager famously put it, “There’s only so far you can get with three junkies and an alcoholic.”

It should be noted, incidentally, that this will most likely never happen again. I don’t know what twenty-five year old junkies and drunks do with their time these days – probably some horseshit on the internet – but they definitely don’t form sleazy rock’n’roll bands. Grunge cornered the market on this kind of chemical excess a few years later, but those bands let you know they were bummed-out and suicidal from the first chord.

Sea Hags were a different beast. They were a rock n’ roll band that just happened to be completely out of fucking control. Nobody’s even got that kind of conviction anymore. Anyway, the band imploded in 1990 and their bass player, Chris Schlosshardt, died a year later of pneumonia. His death also ended The Nymphs, but again, another story for another day. The drummer joined GN’R for a couple months. The guitar player joined Stephen Pearcy’s band, Arcade. The singer became homeless. So that was basically it. One and done. Goodnight, folks. And all we’ve got left is the record.

Although I am a staunch defender of this album, I will be the first to admit that Sea Hags is not chock full of hits. Nothing stands out as a the clear winner on either side, really. But it all sounds authentic, and that’s the reason it still resonates. Sea Hags don’t sound like tourists, ever. Songs like Miss Fortune and In the Mood For Love hash over the same rock n’ roll cliches as, say, Faster Pussycat or Junkyard or Motley Crue, they just sound a lot cooler doing it. They don’t just sing about crashing their motorcycles, they have the decency to actually crash their goddamn motorcycles first. You wanna believe in these dudes, maybe because you know they’ll never make it to the finish line, but they’re racing towards it at a blinding speed anyway. For a certain segment of the population, Sea Hags will sound exactly like it’s supposed to: like the throbbing, ragged heart of Saturday night. To everyone else, it’ll just sound like more 80s rock’n’roll bullshit. And that’s fine. But you should probably know that these dudes almost fucking died making this. And a couple of years later, at least one of them was, and a couple others were thoroughly ruined.

And surely, that’s got to count for something? 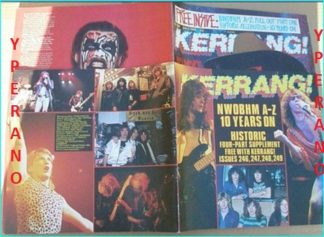