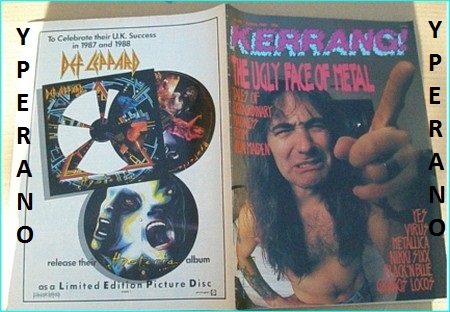 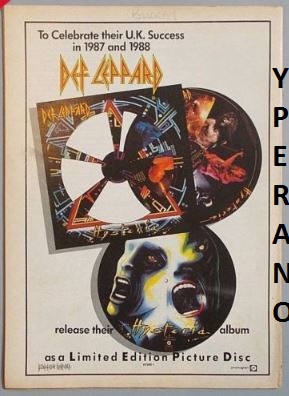 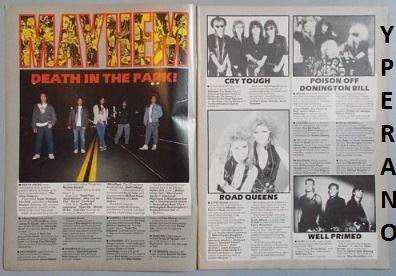 This issue of Kerrang! magazine features Steve Harris of Iron Maiden on the cover and an accompanying 6 page article which includes 8 photos.

Iron Maiden’s Steve Harris adorned the cover of Kerrang!, one week after the band had released their seminal Seventh Son Of A Seventh Son album.

First up, let’s have a look at the big news that week, shall we?

Poison were dropping off the bill of the ‘88 Castle Donington show. For a meagre £17 you could see Iron Maiden, KISS, Guns N’ Roses and David Lee Roth. Better yet, it appears you had to send a cheque or postal order along with a self-addressed envelope, then wait 28 days to get your ticket. Madness.

LA hair metal band Warrant, were “heavier than Poison” (if you needed extra incentive to check them out).

At this point, the world had yet to hear the majesty of Metallica’s 1988 opus, …And Justice For All. In fact, no-one outside of the band even knew what Metallica’s new album was going to be called Drummer Lars Ulrich gives us a hell of an insight into songs that would eventually go down in metal lore as stone cold classics. “We don’t care what people think or expect,” he said, “we please ourselves first and foremost.” Handy, then, that in doing so, Metallica also delivered one of the finest albums of their illustrious career.

in this issue, Iron Maiden appropriately scooped all 5Ks for Seventh Son…, Acid Reign were awarded a fence-sitting three and three quarters (that shit wouldn’t fly now) for Moshkinstein and some band called Undertow, that not even the internet seems to know, got a bit of a kicking with a 2K score for their album, Ghost. We never heard of them again…

Before the days of Twitter and Facebook, magazines actually used to get letters from their readers. In this issue we had someone wondering what happened to Witchfynde, someone else sticking up for Anthrax and another letter taking us to task for a recent Zeppelin review. We also had not one, but two pretty sharp pieces of satire from our readers on thrash and AC/DC. Retweet, my dudes, retweet.

Aaaaaand right at the back of the issue, we have our cover story feature on Iron Maiden; they were traveling through Germany. In it, all manner of salacious tales from the road are shared, there’s a terrific photo of the lads wearing nothing but towels and smiles, and you have Steve Harris and Bruce Dickinson in top fighting form.

“If Number Of The Beast brought heavy metal properly into the 1980s,” the vocalist stated, “then with Seventh Son Of A Seventh Son, I think we’ve shown the way for heavy metal in the 1990s!”

“How we’re ever going to follow it up though,” the bassist said with an exasperated shrug, “fucked if I know!”

You needn’t have worried, Steve. It all worked out okay in the end.

Kerrang – the longest running and most famous UK Rock and Heavy Metal magazine. These mags have now become ultra collectable pieces of music memorabilia and have featured some of the biggest and smallest names in Rock/HM. Buy a piece of rock history today!!!!!

YES Owner of a Lonely Heart [Their most famous best song 2 versions, one of them a mix] check VIDEO 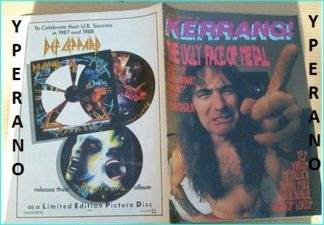