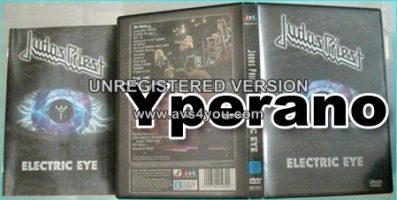 Electric Eye is a compilation DVD by Judas Priest released in 2003 and certified Platinum by the RIAA. It features music videos, BBC performances, and the first official DVD release of a concert filmed in Dallas, Texas during the 1986 Fuel for Life Tour, previously released as Priest…Live! on VHS and LaserDisc.

This DVD features all the key promotional videos, the 1986 Dallas concert and 7 rare BBC performances, plus detailed notes and photos:
Videos:
1. Living After Midnight
2. Breaking The Law
3. Don’t Go
4. Heading Out To The Highway
5. Hot Rockin’
6. You’ve Got Another Thing Comin’
7. Freewheel Burnin’
8. Love Bites
9. Locked In
10. Turbo Lover
11. Johnny B Goode
12. Painkiller
13. A Touch of Evil

Breaking The Law, a song performed countless times around the world in such sun-kissed places as Rio, Texas and Honolulu, began its life on a drizzly day in a farmhouse in Staffordshire, when Judas Priest guitarist Glenn Tipton got the idea for the song.

While Priest were working on their 1980 album British Steel, Tipton took the basic framework of the song to his writing partners – vocalist Rob Halford and guitarist KK Downing – who helped with the final arrangement’s balance of crunching guitars, metronome drums and bellow-your-lungs-out chorus.

“It turned out to be one of the all-time classic metal riffs,” Halford says, casting his mind back. “As I recall, the bulk of the song was conceived when we were at Ringo Starr’s old house, recording the album. Great as the music was, the lyrics had their place. And they just arrived out of thin air. Breaking the law: where on earth did that come from? I haven’t a clue. But it tapped into an angst that Priest had never really covered until that point.”

Nevertheless, Halford easily immersed himself in the hob-nailed boots of the song’s desperate lead character, relishing the prospect of roaring: ‘You don’t know what it’s like/You don’t have a clue/If you did you’d find yourself/Doing the same thing too.’

“We all came from tough working-class backgrounds; Walsall and West Bromwich were pretty bleak parts of Birmingham in those days,” he offers. “We could all relate to the need and the want of trying to break out of an unpleasant cycle.”

Ringo’s aforementioned gaff, Tittenhurst Park, was previously owned by John Lennon, and his Imagine was recorded in its White Room. Priest and producer Tom Allom had rowdier things in mind, including making use of various on-site props during the sessions. It was Allom’s idea to smash a milk bottle and mix it in alongside a police siren. “We threw bottles against the wall after we’d had a few,” Halford chuckles. “We used a billiard cue as scythes, and rattled trays of cutlery in Metal Gods, also slapping a piece of microphone cable for whipping sounds.”

It was Columbia Records who suggested Breaking The Law should be the second single from British Steel. The label also agreed to finance what turned out to be one of the most comical heavy metal videos of all time.

“We were delighted when the song kicked up enough dust for them to take it to the next level,” Halford recalls of what became Priest’s joint-highest-charting single in the UK (along with Living After Midnight from the same album).

In the ludicrous, Julien Temple-produced video Priest dress up as vicars and attempt to rob a bank, using guitars as weapons, and making their getaway on the flyover past what was then Hammersmith Odeon.

“MTV was just about to become enormous, and we understood that enough to make use of it,” Halford says. “If we’d stuck with the song’s exact lyrical content for the video it’d have fallen flat on its face.”

Because of its crossover appeal and old- school metal credentials, Breaking The Law is he one Judas Priest song that just about every metal fan knows. Halford insists that he’s comfortable with the band being most famous for one of their more pantomime moments. “Poking fun at yourself has always been a very British way.”

Having sung Breaking The Law on and off for the past 24 years, nor has he become even remotely sick of it. “No, never at all,” he says, dismissing the very suggestion. “Every night it’s a tiny bit different to any other, and I still get a massive adrenaline rush on hearing those twin guitars fire up.

It’s also a great crowd participation number. Everyone’s had a confrontation with a copper and likes to scream about breaking the law, don’t they?”

Those who have covered the song include Therapy? (Rob: “Sorry, I’ve not heard their version”), ex-Warlock singer Doro Pesch (“I can really imagine her belting it out”) and the San Francisco- based gay heavy rock band Pansy Division. “I know all about that because I performed it with them on stage at a Gay Pride gig in San Diego. Chris Freeman [bassist] is a friend of mine and they’re wonderful little band. It’s my hope that because we now live in a little more enlightened climate, people will give them a chance.”

Next up for Judas Priest are some soon- to-be-confirmed summer festival ppearances, and beginning the writing process for a follow-up to Angel Of Retribution, a reunion album released back in 2004.

“We’ve already put bits and pieces together and will soon be setting our noses to the metal grindstone again,” he concludes. “Hopefully it’ll be yet another metal masterpiece. But I wouldn’t yet like to speculate about a release date.” 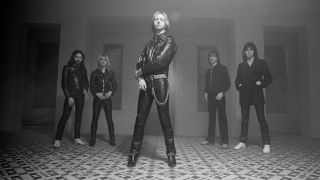 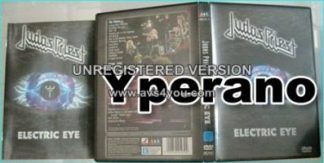