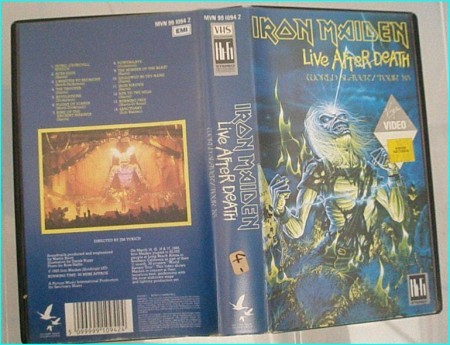 Live After Death is the video compendium to the double-live Iron Maiden album of the same name.

The video captures Iron Maiden in concert, recorded over a sold-out four-night stand at Long Beach Arena on the second night, 15 March 1985, during their World Slavery Tour. The video also contains footage from a completely different night from the tour that was originally aired as a special on MTV. The VHS was certified Platinum in 1987 by the RIAA.

Allmusic praises Live After Death for being “a stunning live document of an important British heavy metal band at the peak of its power”, deeming it “a visual pleasure as much as a sonic one.”

Track listing:
“Intro: Churchills Speech”/”Aces High”
“2 Minutes to Midnight”
“The Trooper”
“Revelations”
“Flight of Icarus”
“Rime of the Ancient Mariner”
“Powerslave”
“The Number of the Beast”
“Hallowed Be Thy Name”
“Iron Maiden”
“Run to the Hills”
“Running Free”
“Sanctuary”

‘Live After Death’ properly captured Iron Maiden’s frenetic live act on the back half of their expansive, 187-show ‘World Slavery’ tour in support of their mighty fifth record, ‘Powerslave.’ Famously kick off with a speech from Winston Churchill, “Aces High” marks the opening of the set as Bruce Dickinson storms the stage with one of the most challenging songs of the night. Featuring classics like “Revelations,” “The Trooper,” “The Number of the Beast,” the new epic “Rime of the Ancient Mariner” and more, ‘Live After Death’ is most notably completed by Dickinson’s stage banter, a hallmark of any Maiden show. 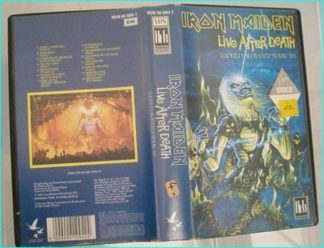