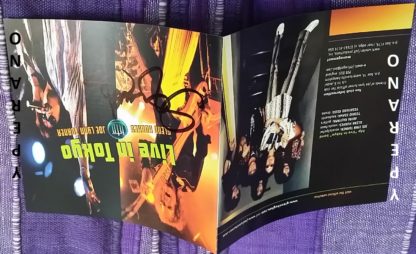 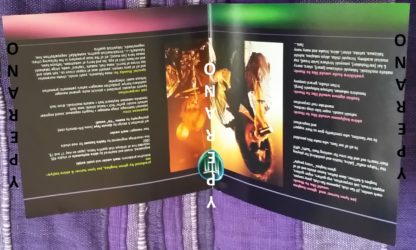 Live In Tokyo was the only live record to be released by the Hughes Turner Project. The album was recorded at the Shibuya Club Quattro in Tokyo, Japan on May the 17th and 19th 2002 on the first leg of their tour to support their debut album HTP.
The set-list comprises four songs from the HTP album as well as other songs from both Hughes and Turners back catalogues including Deep Purple, Rainbow and Black Sabbath numbers. For the most part the two sing their own songs solo, only performing duets on the HTP songs.
For the Japanese leg of tour the pair were joined by native musicians Akira Kajiyama (guitar), Toshio Egawa (keyboards) and Yoshihiro Kudo (drums). While Kajiyama had contributed some guitar solos to the HTP album, the others had not taken part in its recording and this is the only Hughes Turner Project release they appear on.

Glenn Hughes Vocals/ Bass
Joe Lynn Turner Vocals/ Guitar
Akira Kajiyama Guitars
Yoshihiro Kudo Drums
Toshio Egawa Keyboards
——————————————————–
5.0 out of 5 stars Really kicks!!!,
I’m glad to finally have this in my collection! I loved the first HTP album and am enjoying the live one as much. Along w/ the HTP cuts like “Devils Road” and “You Can’t Stop Rock And Roll” we’re treated to versions of Rainbow/Deep Purple tracks like “Death Alley Driver”, “I surrender”, “Stormbringer”, “Mistreated”, “King Of Dreams”, “Street Of Dreams” and “Spotlight Kid”. I only wish they’d included a version of “Burn” and “No Stranger To Love” from Hughes’ days w/ Deep Purple and Black Sabbath repectively and even some Turner era Malmsteen songs like “Heaven Tonight” or ” but Crystal Ball” might have been nice too. Overall though… a very good CD!
——————————————————–
5.0 out of 5 stars A Live Album as it Should Be
This live album encompasses some of the best from the recently released HTP studio album, Deep Purple, and Rainbow. The sound and performances are consistent throughout. Often, new bands sound terrible in concert, but Glenn Hughes and Joe Lynn Turner do not falter, indicative of their talent and tenure in the rock world. Their Japanese backing band are quite talented musicians in their own right. The frantic organ playing in “Death Alley Driver,” the guitar work in “You Can’t Stop Rock and Roll” and “Dark Days,” and the thunderous drums in “Ride the Storm” all attest to their talent. However, this album is not without its more subtle songs, such as “King of Dreams,” a wonderful treat from Turners Deep Purple days. Also, “Mistreated” showcases Hughess wonderful vocal and bass-playing skills.
Turner and Hughes share the spotlight; their egos do not crowd the CD, which is a benefit for the listener. It seems that their wild days have passed them and that they now concentrate on the music, which is, in fact, the most important thing anyhow. This CD is a definite must-buy. If you love Rainbow and Deep Purple, you’ll love this. If not, then you’ll probably still like it. Given the type of “rock” dominating the airwaves lately, this will feel like a cool breath of fresh air. If you like it, I’d also suggest you pick up their studio album, which contains wonderful songs not present on the live album.
——————————————————–
5.0 out of 5 stars And I’m riding the Devils Road….,
This is a very good album. I bought it for the new live versions of the Rainbow/ Deep Purple/ Black Sabbath songs on it, but was even more impressed with the new tracks. As previosly reviewed, the sound quality is excellent. This was one CD I was glad to have purchased.
——————————————————–
5.0 out of 5 stars
This is a right-in-your-face rock & roll, with lots of feeling (courtesy of Mr. Hughes & Mr. Turner, two of the most talented singers and songwriters of all time) and with hot versions of Purple, Rainbow and Sabbaths classics. A must buy for classic hard rock fans. The reviewer below doesn’t have any idea of what true rock is all about…
This album confirms that Glenn is “the voice of rock and roll”. Joe is the one when feeling comes around. Together, these guys are dynamite!!!