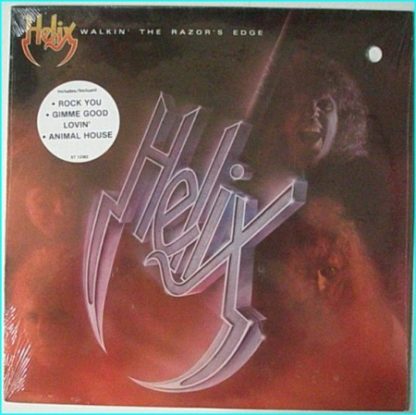 Walkin’ the Razor Edge was the fourth album by the Canadian heavy metal band Helix. It was released on the Capitol Records label in 1984.
A music video was made for the Crazy Elephant cover “”Gimme Gimme Good Lovin'””. Two versions of this video were filmed: One for music video channels, and the other being an “”adult”” version featuring topless models including a then 16-year-old porn star Traci Lords. This version was aired on the Playboy Channel in the United States.
The band also made a promotional video for their A Foot in Coldwater cover, “”(Make Me Do) Anything You Want””, as well as “”Rock You””. The video for “”Rock You””, filmed in a quarry in Kitchener, Ontario, is perhaps best known for the image of guitar player Brent Doerner emerging from the water to play his guitar solo.

“Walkin’ The Razor’s Edge” was Helix 2nd album with Capitol Records, and they went around the world with it.With their major label debut album No Rest For The Wicked racking up healthy sales and great reviews, Helix forged a reputation as one of the hottest young Canadian rock bands to have emerged in the early ’80s.Their fire brand blend of hot rock, ear shattering riffs and shout-it-out-loud hooks made them not only radio / MTV friendly but also a must see in-concert experience. “Walkin’ The Razor’s Edge” marks a step up for the band in terms of both production and song content. Tracks such as ‘Young And Wreckless’, ‘When The Hammer Falls’, ‘Animal House’ and a genuine Canadian hit single in ‘(Make Me Do) Anything You Want’, showcase a band revved up and ready to rock, taking it to the people with endless road work. And the album packs ‘Rock You’ (written by AORster Bob Halligan Jnr), one of the biggest hair metal anthems in history, which ranked in the Top 40 for several weeks.“Walkin’ The Razor’s Edge” is a kick ass record, an ’80s melodic hard rock classic.The Jon Astley remastering is really good retaining the integrity of the original sound, just adding some freshness and deep end. high energy gem. A Classic.

helix when the hammer falls

helix  My Kind of Rock

Helix have released “making of” footage from the shoot for their 1984 music video, “Gimme Gimme Good Lovin'”.

A message states: “In 1984 Helix recorded ‘Gimme Good Lovin”, the old Crazy Elephant hit for the Walkin’ The Razors Edge album. This was the second video from that album, shot in Hollywood, California at Francis Ford Coppola’s studio Zoetrope. Traci Lords appeared in the video, as did other girls from Penthouse, Oui, and Playboy Magazines, plus some of the Solid Gold Dancers. Rip Taylor, Robin Williams, & Richard Pryor all came over to watch us film, as they were next door filming Pryor’s Place.” 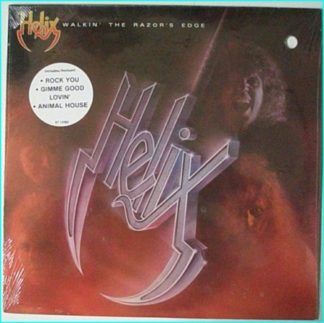