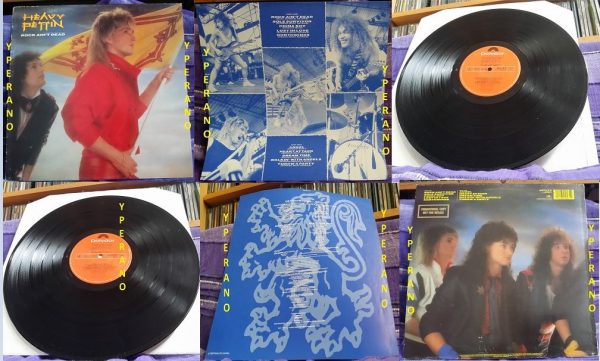 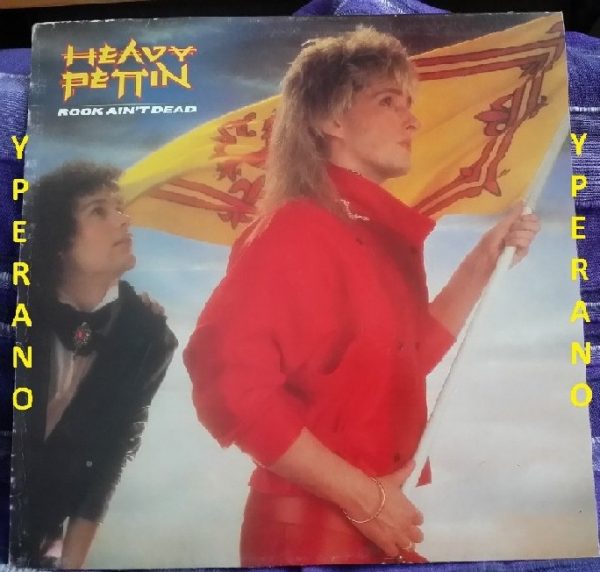 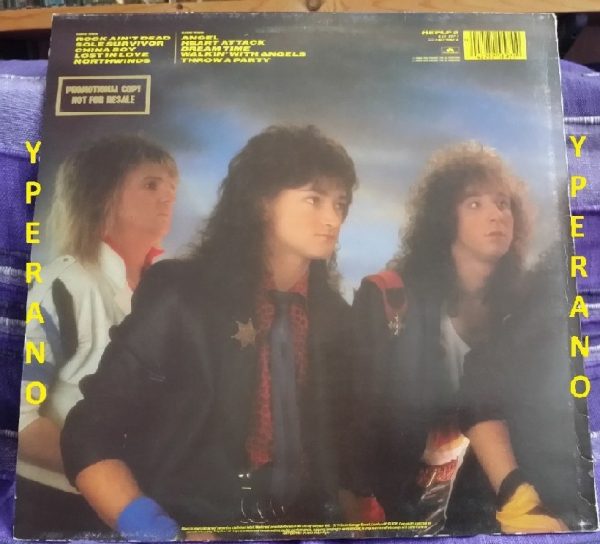 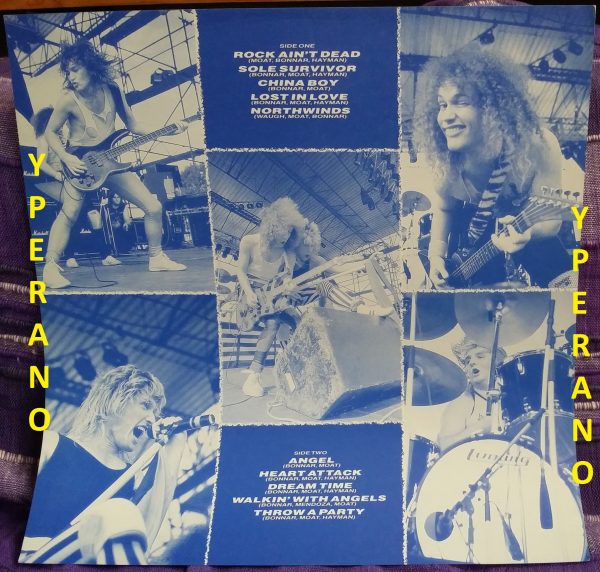 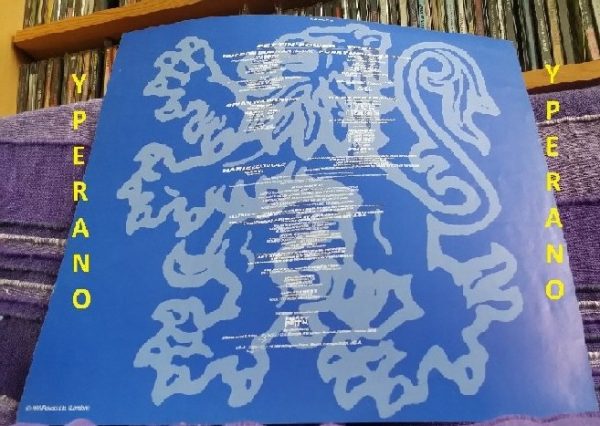 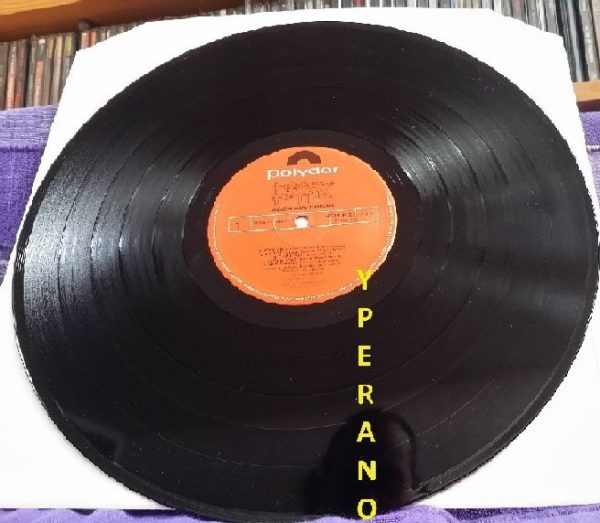 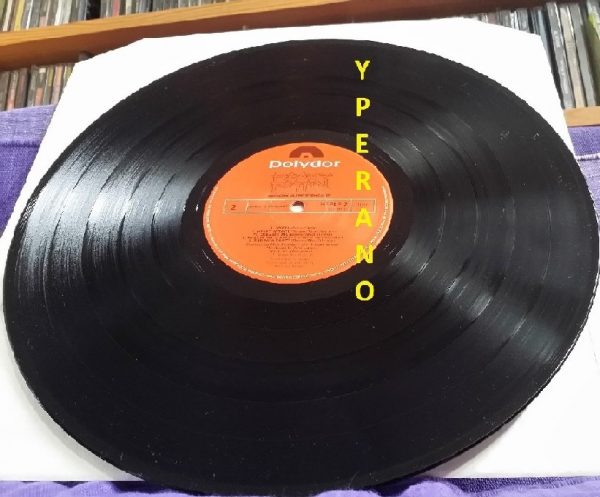 Rare, with “Promotion Copy, Not For Resale” Stamp on the back cover.

That cover… that’s just not good.  These Scottish pretty boys had a really fine debut in 1983 with Lettin Loose.  Their accessible hard rock sound coulda-shoulda-woulda made them rock stars, but, well, you know how it goes.  Rock Ain’t Dead, Heavy Pettin’s follow-up to Lettin Loose, appears to be a tremendous overreaction from a band desperate for radio acceptance after their debut’s commercial underwhelment.  Rock Ain’t Dead was WAY overproduced.  Many reviewers have pointed to Heavy Pettin’s Def Leppard-like approach on this album.  Indeed, they really went all out on the gang vocal layering (ala Pyromania).  In the end, the hard rock edge of the debut was traded in for studio heavy-handedness and a loss of all things heavy.  Another thing that bears mentioning is that lead singer Steve Hayman’s voice seems to be even more helium enriched than before (an acquired taste for sure).  One can’t deny that Heavy Pettin knew their way around a hook!  Rock Ain’t Dead is lighter fare for sure, but there’s some really nice songwriting here.  Check out Sole Survivor, Lost In Love and Walkin’ With Angels.  Melodies so sweet and that’s what keeps me coming back to Rock Ain’t Dead again and again!  My score: A-

Heavy Pettin’ Ain’t Dead – 89%
Heavy Pettin followed Lettin Loose with Rock Aint Dead in 1985, and it stands as significantly stronger than their début. The production is much better, the songwriting more is more thought-out and everything just seems more professional and complex. This is most likely because Heavy Pettin really began picking up on the Airplay-Oriented rock trend that groups like Journey and Foreigner had brought to massive acclaim. Like many New Wave of British Heavy Metal groups, the best idea for success was to imitate the American AOR bands. Saxon did this; Raven did this; Tygers of Pan Tang did this. While most now look back and see that with the glaring exception of Def Leppard this idea nearly always resulted in commercial failure or fan alienation, it surely made sense at the time. And with Heavy Pettin, it actually kind of worked.

Steve “Hamie” Hayman sounds slightly less like Brian Vollmer from the Canadian heavy rock band Helix than he used to. Lettin Loose revealed the two men could sound almost identical through songs like Hell is Beautiful. Anyway, now Hayman sings in a higher pitch, more similar to Saxons Biff Byford, and he really develops his idiosyncratic style of squeaking at the ends of words. While that might sound odd, its actually more impressive, going beyond a standard falsetto into something that sounds more like a chew toy. It sounds cool, though.

As for the songs, the highlights include Rock Aint Dead, Angel, Dream Time, and Throw a Party. The first is a straightforward, fist-pumping anthem to rock music that basically does what KISS and Twisted Sister are famous for. Angel is a sleazy sex song that takes a surprising turn at the bridge, where the tone switches to a romantic chant of the line Angel stole my heart tonight, blew it away like dynamite. Heavy Pettin seemed to have taken lessons from the Sweet and other original British glam rockers on how to keep sex songs romantic and sleazy at the same time, which is almost impossible to do. Even legends like Motley Crue and Ratt could never quite pull this off. Heavy Pettin accomplish this same feat in the power ballad Dream Time, but by the time Throw a Party comes along the sleaze in full-force as soon as the Ted Nugent-style riff opens up.

One thing that cannot be denied is that this album is driven by some truly incredible leads and melodies. Make no mistake; when Heavy Pettin make a good song, they blow you away like dynamite.

5.0 out of 5 stars An all-time classic…
If you’re a fan of melodic rock, or of this band, have any of their other albums, or just want to replace your old LP of this title…GET IT NOW!

5.0 out of 5 stars Don’t let the pretty cover fool you.
If you enjoyed the first album, Lettin’ Loose, Rock Ain’t Dead will not disappoint you. It is just as hard and edgy as the first. I am not sure who they were trying to appeal to with the album artwork. I bought their first album because it had legs sticking out of a window at a drive-in and song titles like “In and Out of Love”, “Devil in Her Eyes”, “Shout it Out” and “Rock Me”. I have to admit, I probably never would have bought this album based solely on the album cover. If you like hard rock, this is sure to please.

5.0 out of 5 stars Great Heavy Pettin album
1985s Rock ain’t Dead was the second album from Heavy Pettin’, a melodic hard rock band from Scotland that was loosely associated with the important 80s New Wave of British Heavy Metal (NWOBHM) scene. Rock ain’t Dead initially drew some criticism from fans who thought the band softened their sound, but Heavy Pettin’ was always closer to Def Leppard than Iron Maiden. Criticism aside, Rock ain’t Dead is a fantastic slab of anthemic arena rock, full of rousing choruses, powerful guitar solos, and the kind of dramatic keyboards you’d only find on a mid 80s rock album. Its very similar to what Def Leppard was doing at the time (circa High and Dry and Pyromania), but there are also similarities to White Sister, Y&T, Autograph, and heavier Night Ranger.
Rock ain’t Dead is the kind of album that 80s rock fans should definitely seek out.

5.0 out of 5 stars Melodic hard rock in the style of “Shy” and “Def Leppard”
“Rock ain’t Dead” is the second studio album by British melodic hard rock band “Heavy Pettin”. Though often regarded as a NWOBHM group, “Heavy Pettin” actually debuted a year later in 1983; in addition the band brought to front a sound and image that hard more in common with American AOR and glam metal than British heavy metal.

In fact “Heavy Pettin”s melodic hard rock style has been further smoothened on this second album sounding incredibly similar to fellow UK melodic hard rockers “Shy”. You can expect over-produced rhythm section, melodic guitar lines (which turn into crystal clean chords during the power ballads), moderate use of background keyboards and high pitched, but overly melodic, vocals in the style of Tony Mills and Tony Harnell.

The line up features lead singer Hamie, guitarist Punky Mendoza and Gordon Bonnar, bassist Brian Waugh and drummer Gary Moat. In terms of songwriting “Heavy Pettin” is built on the same catchy hooks and rhythm patterns found on a “Def Leppard” album, though the delivery, as mentioned above, is far more rocking. “Rock ain’t Dead” holds a fair amount of powerful melodic rockers in “Heart Attack”, “China Boy”, the power ballads “Lost in Love” and “Dream time” and the super dramatic “Sole Survivor”-an unforgettable chorus by any means. Conclusively if you are a fan of the 80s melodic rock scene of the UK, “Heavy Pettin”s second album should work perfectly for you.