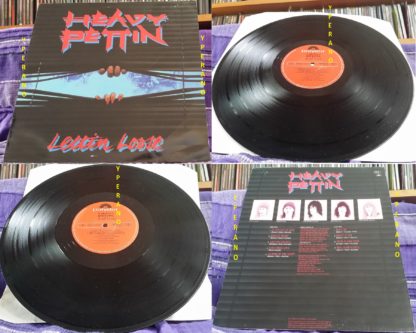 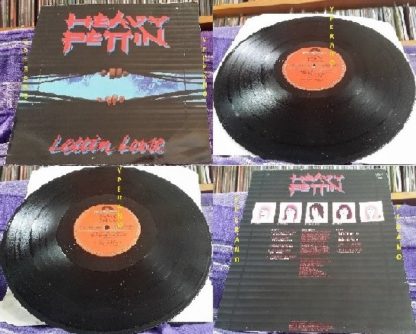 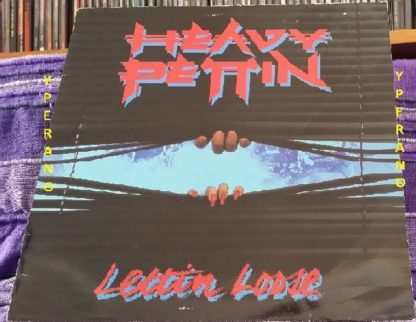 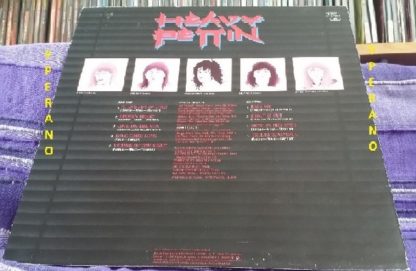 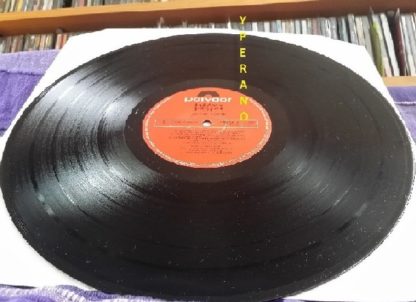 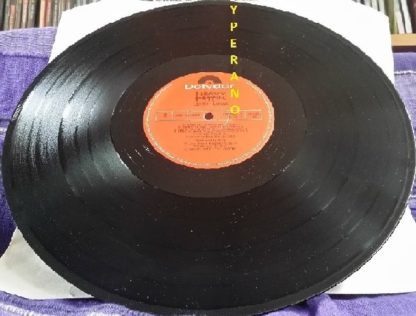 Heavy Pettin gigged extensively before releasing their debut single, 1982’s ‘Roll the Dice‘ on Neat Records. This was good enough to catch the eye of Polydor Records who soon extended a major-label deal to the band then, with Queen guitarist Brian May on board as co-producer along with Reinhold Mack, the group recorded their 1983 debut LP, the classic ‘Lettin Loose‘. Opening slots supporting the likes of Kiss, Ozzy and Whitesnake followed. 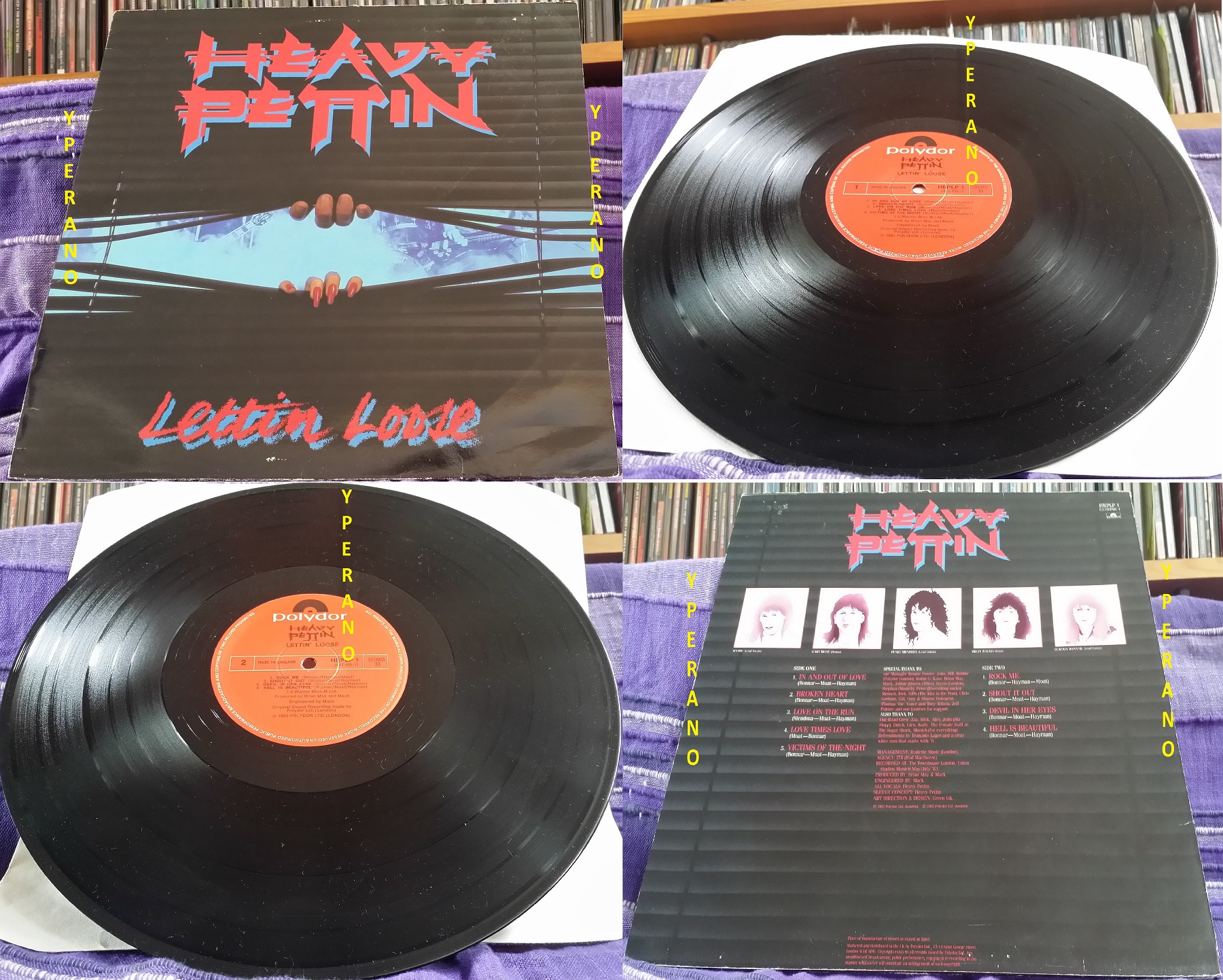 Tracklist?
A1 In And Out Of Love
A2 Broken Heart
A3 Love On The Run
A4 Love Times Love
A5 Victims Of The Night

5.0 out of 5 stars It comes as no surprise…,
Oh man! This was one of my top 10 favorite albums of the time. I saw these guys in Seattle when they toured with Saxon on their “Crusader” tour, and it was so loud I was physically sick after they got done! Great, melodic stuff, and good energy within the band make this a worthy re-buy.

5.0 out of 5 stars classic NWOBHM,
Under appreciated. Heavy Pettin, in my opinion, was Scotlands answer to early Def Leppard, however, containing more seriousness. Hard, melodic metal from the great and sadly missed 80s.

5.0 out of 5 stars Great 80s Metal Band that America MISSED OUT ON,
This LP was great. They’ve been compared to Def Lep but with a harder edge. I can’t tell you how many times me and my boys jammed to this LP back in the day. I still break it out several times a year ’cause it rocks.

5.0 out of 5 stars Awesome 80s Metal
This is simply an awesome LP by Heavy Pettin. Every song is killer. Nice riffing and good melody. I love it. A must have for any fan of the genre.

Heavy Pettin set about crafting NWOBHM with lots of traditional hard rock influence, sleazy attitude, and some degree of commercial ambition.
Polydor to sign them up pretty early in the scene who financed a couple of minor releases for them before this LP hit the streets in 83. It gathered a decent amount of attention, matching some high-octane thrillers like the anthem Love on the Run and slower, more traditional NWOBHM rockers like Love Times Love & Devil in Her Eyes and is actually a really solid record when you get down to it. Heavy Pettin displays an ability to balance out the ballsy with the commercial viable, not unlike NWOBHM success story and 80s mainstream pinups Def Leppard. Match this with the awesome production values and studio magic made possible by a clearly decently sized budget from large stable Polydor, and were looking at one pretty professional melodic heavy metal record that doesnt lack on the ability to kickass and take names.

Of the tougher side of things, Victims of the Night seriously rocks out hard. The intro section is great, and true Scotsman Steve “Hamie” Hayman, really matches up to the power and sound of Biff Byford which has lead to countless comparisons to said band over the last 30 years. Really great production job with Brian May at the helm on the heavier numbers makes the guitars punch you pretty hard in the face. Love on the Run is another ballsy cut that sounds solid through and through, while Hell is Beautiful is tough as nails NWOBHM in the Saxonish way. On the more melodic hard rock side of things Shout it Out carries through the Def Leppardish vibes the bands known for along with In and Out of Love. Overall, the heavy production job, and relentless speed of a couple of the numbers makes for a great mix of cuts which should get them respect from gritty NWOBHMers as well as commercial rock lovers.

With decent promotion behind them, big studio dollars, and production by Brian May, Heavy Pettin released a heck of a début with this one a mixture of Def Leppard and Saxon permeates the sound, with some great catchy pop numbers like Devil in Her Eyes coming up alongside great heavy numbers this album had all the right ingredients to kick start the band into mega-stardom, however it never really eventuated quite like it should have. A commendable effort without a doubt, this one might just surprise you denim clad metalheads out there with its classy tracks and hard crunchin riffs. Quit avoiding the band, and give this record a chance.

The quintet’s timing was impeccable. The summer of 1981 was a
good time to be a hard rock heavy metal band, and Heavy Pettin’ very
quickly found themselves caught up in the tail end of the New Wave Of
British Heavy Metal. That said, their American-orientated sound and image
was a good deal more polished than that of Iron Maiden and their ilk.

“We listen to Saxon and Def Leppard rather than Black Sabbath
and Deep Purple.” Bonnar later told Sounds magazine. “We’ve alway been
into heavy metal, starting off with Thin Lizzy.”

Hamie was quick to own up to the band’s US flavour in the same
interview acknowledging the influence of bands like Aerosmith. “They’re
more melodic, and I like the way they look,” he told later Dave Roberts,
while Brian Waugh cut to the chase by declaring: “We don’t like the blatant
and fast heavy metal that’s coming out now.”

Young (their average age was just 20), gifted, ambitious and not
exactly shy, Pettin’ saw their opportunity and wasted little time grasping it.
Within mere months of their formation, Kerrang!’s Geoff Barton was prais-
ing a demo consprising the tracks ‘Love Xs Love’, ‘Speed Kills’ and ‘Hell is
Beautiful’ that the band had recorded in just 18 hours. It secured them a
single deal with independent label Neat Records, home of Venom, the
Tygers Of Pan Tang and Fist. ‘Roll The Dice’ b/w ‘Love Xs Love’ won them
acclaim from all over the world. However, with reams of positive press cut-
tings in hand, the band were already thinking of bigger things, turning
down all offers from Neat to record a full-length album.

Times were hard at the start, and the band freely admit to being
forced to steal food to survive. Revealed Bonnar. “Me and Brian used to
work in a butcher’s shop. We’d work for most of the week just to pay off
our debts.”However they eventually scraped together some communal
dosh, invested in an old coach and set about gigging the length and
breadth of the land. And when Tony Wilson, then producer of Radio One’s
Friday Rock Show (and head of Totalrock Radio), invited them to cut
a session, word began to spread like wildfire.

Musically speaking, the self-belief of Heavy Pettin’ was to be vin-
dicated, first in the shap of publishing deal with Warner Brothers, then
a contract with Polydor Records. Better still, none other than Brian May
and his co-producer Mack were being lined up to produce their debut
album. Significantly, it was the first time that Queen’s legendary guitarist
had stepped ouside of the band to produce another act.

“Warner Brothers had sent a tape to Brian in Los Angeles because
they thought he’d be the perfect producer”. “Brian’s been wanting to produce for a long time. He
told us he was just waiting for the right band.”

Preceded by a 12″ single of ‘In And Out Of Love’ (b/w ‘ Love On The
Run’ and a Friday Rock Show version of ‘Roll The Dice’), it was warmly
recieved by Kerrang!, though Neil Jeffries did voice some mild
reservations.

He wrote: “There’s a very big buzz about this band at the moment.
Polydor UK are convinced that the young Glaswegians are going to be
hugh. ‘Lettin’ Loose isn’t a classic debut, but Heavy Pettin’ have hit upon
a formula that sounds really good. They can write songs! Electrifying riffs,
super-crisp harmonies, lively solos and dynamic arrangements.. a change
of pace here, and acoustic guitar there. Nothing startlingly original but it
works, Goddammit!”

On the downside – if you consider it as a negative -Jeffries sug-
gested that May and Mack had made the band sound a little too much like
Def Leppard, though he concluded that ‘Lettin’ Loose’ was “a marvelous
mixture of power and melody, riot and restraint”, and offered the bold pre-
diction: “Heavy Pettin’ could well become the new stars of the 1980s.”

Mark Putterford of Sounds went a stage further still, proclaiming
I’d say that ‘Lettin’ Loose’ is better than anything Def Leppard have pro-
duced so far, and amid the critical acclaim for ‘Pyromania’, that’s quite a
compliment.”

With supports slots on Kiss and Ozzy Osbourne’s upcoming British
tours about to be confirmed, only a madman would’ve bet against Heavy
Pettin’ taking over the world. Discover the tale’s conclusion in the notes to
this album’s companion piece, 1985’s defiantly titled ‘Rock Ain’t Dead’
album.

No excuses for failing to notice that there’s a very big buzz
about this band at the moment. Polydor UK are convinced
that these young Glaswegians are going to be HUGH, so
they’ve pulled out all the stops, put their money where their
mouth is, and now presumably sit back with £ and $ signs in
their eyes.

It’s a big responsibility for a group as green and inexperienced
as Heavy Pettin’, but listening to this has convinced me that these
five guys have got what it takes.

Electrifying, super crisp harmonies, lively solos and dynamic
arrangements… a change of pace here, and acoustic guitar
there. Nothing startlingly original but it works, Goddammit !!

“Love Times Love” in particular, is a brilliant, shining piece of
commercial Metal, just made for the stage. Yet singling out
anyone track would be unfair because it’s my guess everyone
will have different faves. We’re talking strength in
depth here.

“Lettin’ Loose” is a marvelous mixture of power and melody,
riot and restraint. Wall to wall chunky power chords placed with
infectious chorus lines. If they’ve more where this came from
Polydor are probably right. Heavy Pettin’ could well become
the new stars of the eighties. 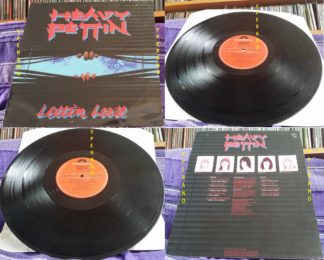