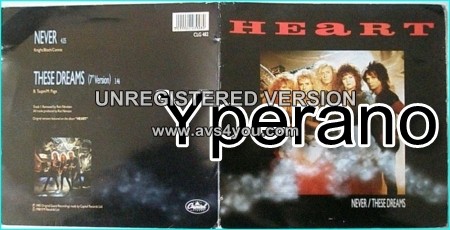 HEART: Never 7″ + These Dreams (7″ beautiful gatefold with killer pictures, especially on the inside of the gatefold)

Both ‘Never’ and ‘These dreams’ were released as singles in 1985, but this double A-side was released in the UK in a limited edition gatefold sleeve edition in 1988.

===================================================
“Never” was released as the second single from the bands self-titled 1985 album Heart. The song is an aggressive rock number with an uplifting lyric to a person who has been discouraged by love. Like their previous single “What About Love”, the music video for “Never” was placed in heavy rotation on MTV.
“Never” became Hearts biggest U.S. hit at the time, peaking at number four on the Billboard Hot 100. It marked the first time that Heart earned two consecutive top-ten hits, and also the first time a Heart album generated two top-ten singles.
The songs’ harmonic chorus highlights not only Ann Wilsons powerhouse vocal talent but also the vocal stamina of sister Nancy, who maintains a soprano harmony throughout the course of the song. 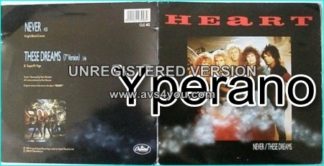