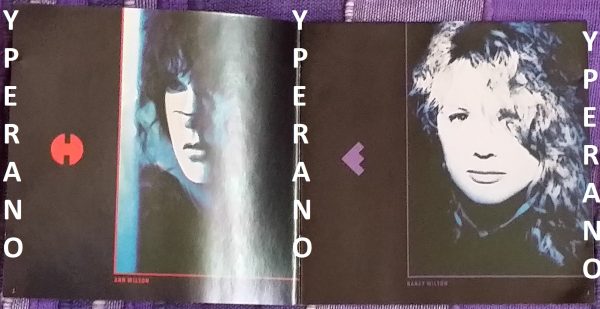 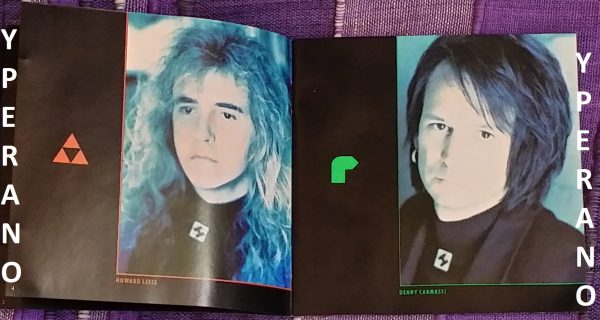 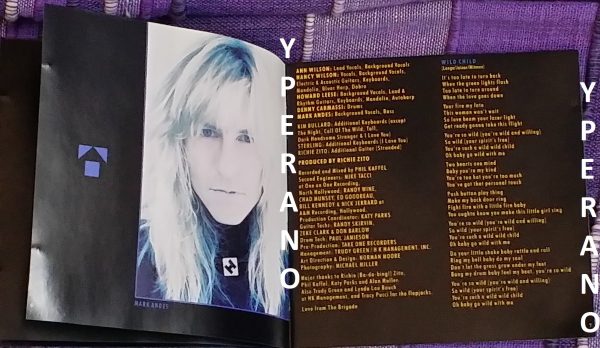 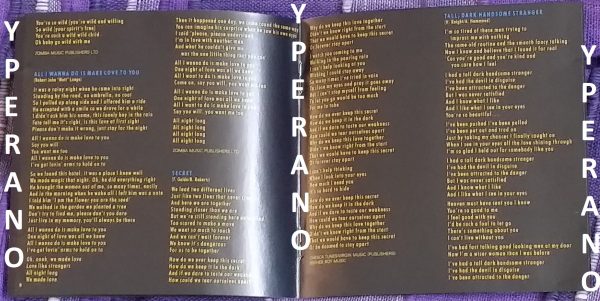 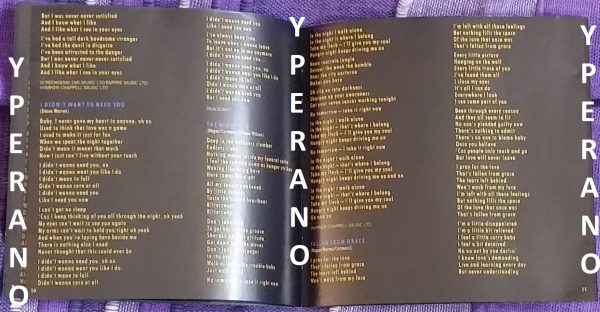 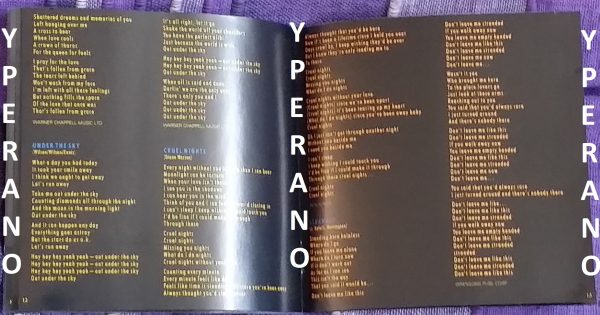 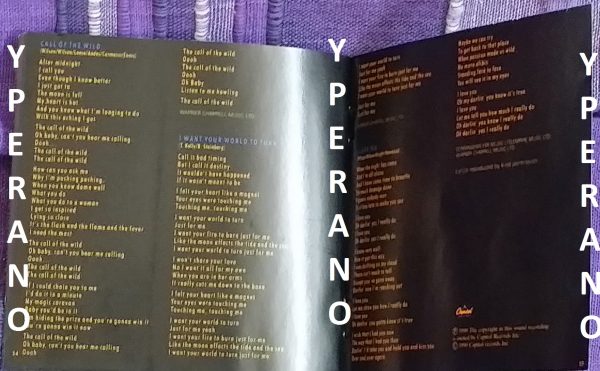 Brigade is the tenth studio album, eleventh overall, released by the popular rock/pop band Heart. Released in 1990 after a three-year gap between albums, the album featured the #2 Billboard Hot 100 hit “All I Wanna Do Is Make Love to You” and reached number three on the U.S. Billboard 200 and was followed by a successful world tour. Like its predecessor Bad Animals, the album is notable for a sharp decline in writing contributions from lead members Ann and Nancy Wilson, but would be the last of the three “comeback” Heart albums to do so.

5.0 out of 5 stars Absolutely Incredible,
This is by far the best CD Heart ever made. I have everything that they have ever done that I could get my hands on. I love all of their stuff, including the solo stuff, import albums just for one song not released in the US, everything. But this CD rules. I bought it the day it was released in 1990, and years later, it is still my favorite Heart CD. I love every song on this CD. Anns voice is an amazing instrument. Unbelievable power, range, clarity and diction. I’ve seen them in concert 3 times, and she sounds just as good if not better live. Its too bad she never made a duet with Steve Perry. That would’ve just been an absolutely incredible to hear. My favorites on this CD are Under The Sky, Fallen From Grace, All I Wanna Do Is Make Love To You, Wild Child, Secret, and Stranded. Nancy turns in her best vocal performance to date with Stranded. It is such a good album that it is hard for me to say which songs are my faves, because I really love the entire CD. It is also an excellently recorded album, really sounds great.
Buy this CD right now, I promise you, you won’t be sorry.

5.0 out of 5 stars “Taste The Human Heartbeat…”,
By 1990, Heart was well established as one of the most successful bands in America. In 1990, the band released their third Capitol release, “Brigade”. How does it hold up? Read on.
“Brigade” is one of Hearts finest albums. It was at this point that Ann and Nancy started to gain more creative control, as their last two albums were filled with songs that Capitol forced them to record (ie, ballads). This is much more of a rocking album than their previous two releases. The opening track, “Wild Child”, is one of the heaviest tracks the band ever did. Highlighted by a forceful synth line and fierce guitars, it makes for a strong opener. Next comes the big hit off the album, the ballad “All I Wanna Do Is Make Love To You”. Written by Mutt Lange, many people hate this song, but I for one love it. Ann gives one of her most powerful vocal performances on this song, and it deserved to become the hit it became and should get more respects than it actually has. Next comes my absolute favorite Heart song. “Secret” is a heartwrenching ballad filled with magnificent keyboard flourishes, a strong Ann vocal and great acoustic guitar work by Nancy. The next track, “Tall Dark Handsome Stranger” is a forceful rocker with sexy, seductive lyrics and a sultry vocal. “I Didn’t Want To Need You” is a midtempo number, not exactly a ballad but not a rocker either. Its one of my favorite songs on the album. The keyboards on this song are fantastic.

“The Night” is an acoustic, midtempo number with cool, creepy lyrics and some out and out great guitar work. “Fallen From Grace” is a brilliant track and has a beautiful chorus. “Under The Sky” isn’t as memorable as the rest of the album, but its still a really good song. “Cruel Nights” could’ve easily been a hit single. The vocals are superb and the song is catchy and begs for repeated listens. Next comes “Stranded”. Nancy takes on the lead vocals here, and she is fantastic. The acoustic guitar on here is beautiful on this haunting power ballad. A very underrated classic Heart song. “Call Of The Wild” is filler, but good filler. “I Want Your World Turn” I believe also features Nancy on leads vocals and she is great. This is a forceful, seductive number that should have been a single. Finally, theres “I Love You”. Its a deent ballad and is a nice way to close out the album. Its kind of cheesy though.

Overall, I’d definitely recommend “Brigade”. Its one of Hearts best albums. I’d call it a must have.

5.0 out of 5 stars Hearts heaviest albums kicks you-know-what!,
When the 1990s kicked in, Heart returned to a sound that outdid the rock sound of their self-titled album. This is their heaviest album ever! Don’t get me wrong–I like what Ron Nevison did for Heart, but he kind of overdid it with the synths on Bad Animals. Ritchie Zito kicked those synths in the head and replaced them with some bad, bad, guitars!
The chugging opening guitar and blaring lead guitar of “Wild Child” serves to remind all dissers that Heart can still rock. This could’ve been on the Heart album. However, using titles of well-known songs in one verse, “Ring my bell, baby” and “Shake baby rattle and roll” is a bit much.

Then comes a song by the Mutt, you know, Mr. Twain, which gained a bit of controversy because its about a woman who gets impregnated by a hitchhiker after a magical one-night stand because her husbands sterile. At least it put Heart back in the Top Five. One analogy is wonderful: “We walked in the garden we planted to tree.”

The power ballad “Secret”, on an illicit affair, is my favourite song on this album and I wasn’t too chuffed that it didn’t climb higher than the Top 60 on the charts. There is a wall of heavy guitar and the Wilsons powerful vocals that somehow just gets me going.

Holly Knight gives the Wilsons “Tall Dark Handsome Stranger,” which has a sound reminiscent of Bon Jovis “Social Disease” what with the horns, but man, what strong guitars! Yow! OK, bloody great rocker, but did the title have to be such a big cliche?

Diane Warrens great pen yields another power ballad, “I Didn’t Want To Need You” which is another favourite.

Power chords pound left and right in the stomping “The Night”, coming closer to heavy metal than “The Wolf.” This would be a great song to do live–just make sure the crowd doesn’t get too rowdy.

OK, some synth creeps in “Fallen From Grace”, but chugging heavy guitars take precedence. The power harmonies in the main refrain work well. Heartfelt lines: “The tears left behind/won’t wash from my face/

The mid-paced, wistful “Under The Sky” is to Heart what “Dover Beach” was to the Bangles: lets run away together and spend quality time: “Shake the world off your shoulders/you have the perfect alibi/just because the world is wide.” because “when all is said and done/darlin’ we are the only ones”

“Cruel Nights”, which has a backbeat like the Polices “Every Breath You Take” is another Diane Warren composition. The title nights are equal to “missing you nights”, “what do I do nights.” Without that wall of sound, Laura Branigan could’ve done this, as she too benefitted from Ms. Warrens magical pen.

“Stranded” is another power ballad that incorporates inflections from “What About Love.” Its more powerful than its predecessor, but without the emotional depth.

“Call Of The Wild” is a decent rocker, but its the Nancy-sung “I Want Your World To Turn,” co-written by T. Kelly and B. Steinberg (“Alone” from Bad Animals) and its keyboards (not excessive) that makes a welcome change. Nancys sweeter vocals and the catchy hooks in the chorus did it for me. Face it, after enough blaring rockers, one will simply tune out. And the Holly Knight-co-penned ,”I Love You” is a kind of goodnight keyboard synth lullaby after the barn-burning from the rest of the album.

Producer Richie Zito should be credited for giving Heart a swift kick back into the rock zone after the excesses of Bad Animals. The fact that this did well given the emergence of grunge and hip-hop during the decade marks this as an artistic triumph for Heart and rock.