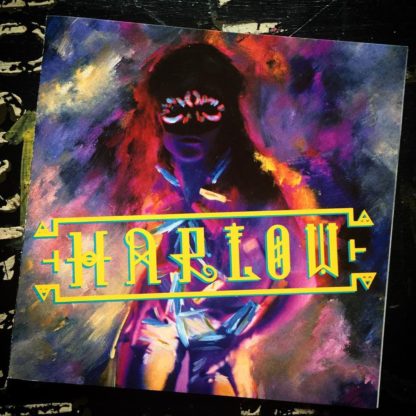 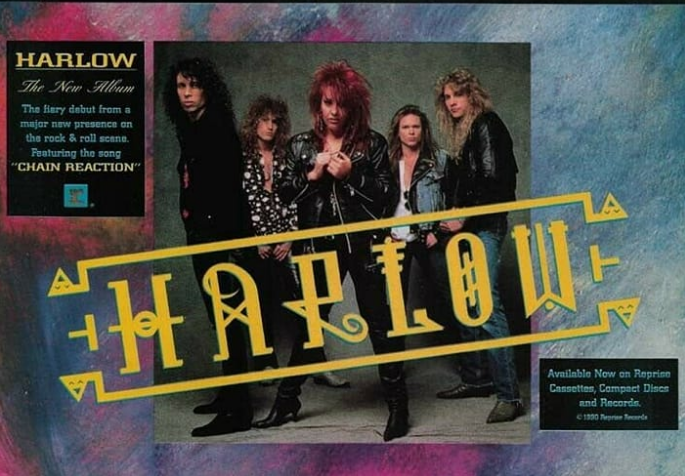 Great Metal band with killer vocalist: Teresa Straley. This album blew me away when I first heard it. Here was a female lead singer with authoritative power in her voice. Forget Lee Aaron, or even Darby Mills for that matter. Teresa Straley powers in over the top of them like a steam train! I’m sure she owes a great deal of gratitude to Ann Wilson (Heart) such is the resemblance. Backed by a band that has credentials oozing out of its skin: Thayer from Black And Blue, Regan from (Ace) Frehleys Comet, and renowned bassist Todd Jensen, Harlow then proceeded to get just as much non-recognition as their by all accounts fantastic label mates Distance did a year earlier.
The music is prime-time melodic hard rock, in the vein of that other LA band Eyes, crossed with classic era Heart, though with Straley singing, the music take a slightly different direction to Soto and Damians mob. The opening brace of songs are in a word ‘wicked’. The beefed up riffarama of ‘Chain Reaction’, the immense atmospheric power of silence’ and the classic ballad ‘ Don’t Say We’re Over’ all point to class emanating through the grooves. ‘When You Love Someone’ sounds unerringly like Hardline. The Eyes comparison is evident on ‘Beyond Control’. ‘Pictures’ sounds like Heart on steroids while ‘Edge Of Love’ weaves a melodic tale of balladry where Regans keyboards lay a nice backdrop. The band unfortunately did not last long, but they did leave one very excellent album which is hard to find. Grab it, as it should take up permanent residence in your melodic rock collection.

this album has some really great songs on it and this gal has a great voice shame they disappeared buy this album trust us. 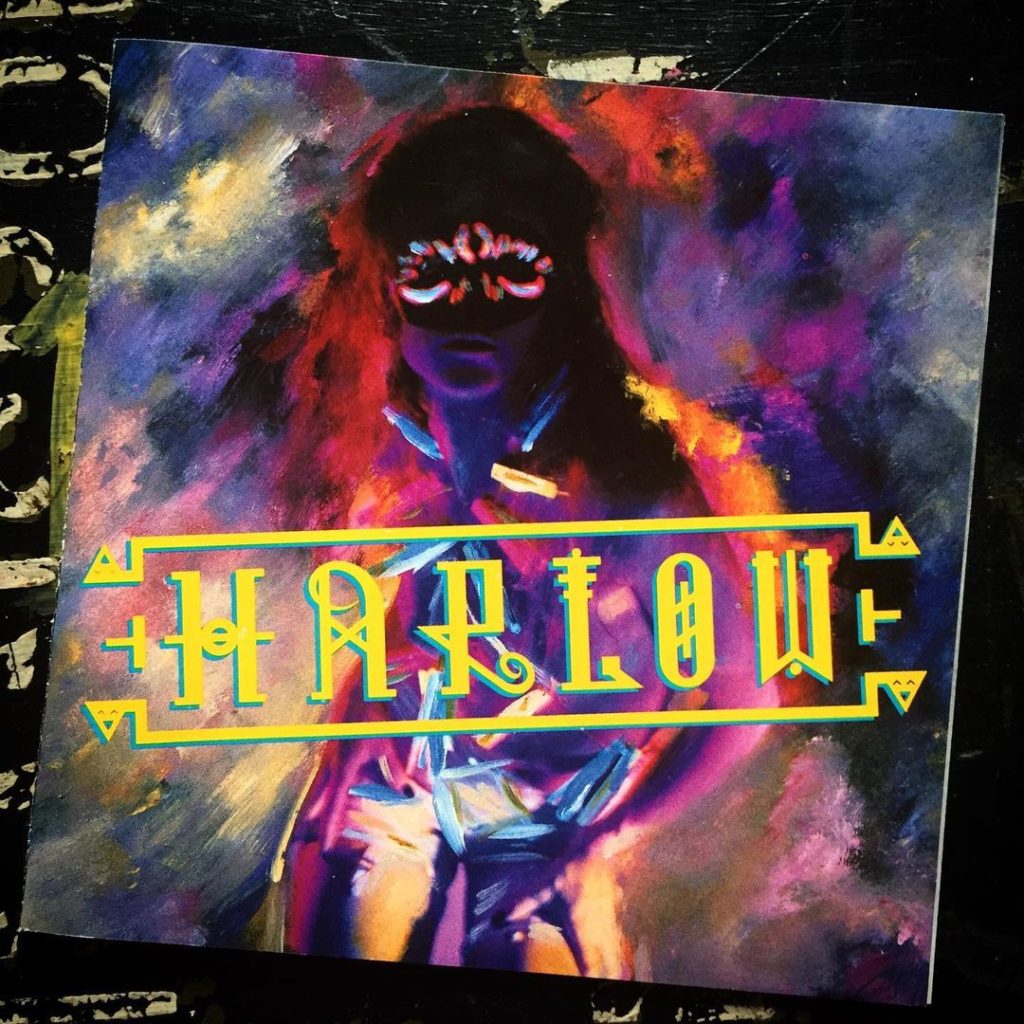 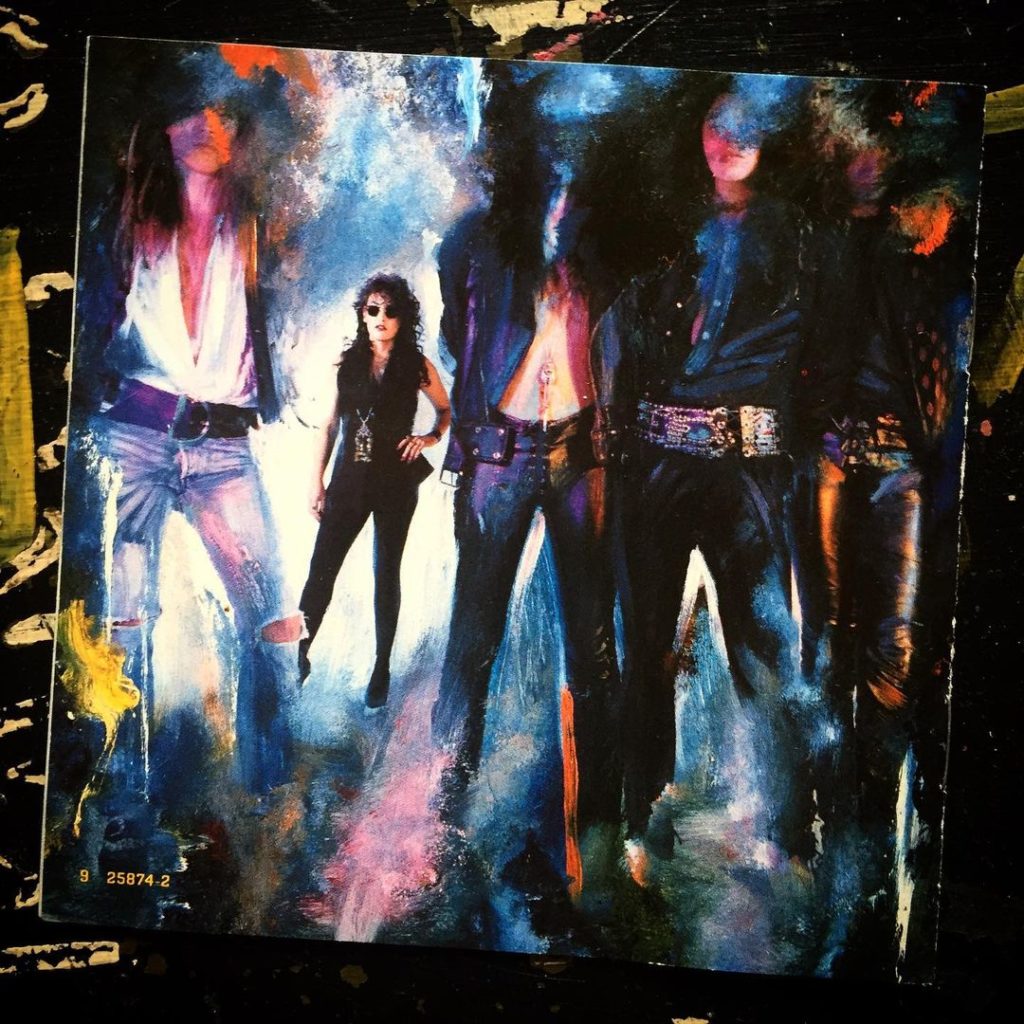 Harlow – Harlow (1990)
Produced by Pat Regal & Teresa Straley
Before someone else says it – yes, that typeface on the cover is horrid. Anyway, I remember really looking forward to this one being released after reading about the band in Kerrang magazine. Not to be confused with numerous other bands that have been called Harlow over the years, this was the first band guitarist Tommy Thayer was in after Black’n’Blue split up and being a big fan of Mr Thayer and co, I was hopeful that this was going to be right up my alley. An added bonus was Teresa Straley fronting the band – there were some killer female-led bands in the 80s; Smashed Gladys, Scandal, Toronto, Saraya, Headpins…the list goes on, and Teresa Straley from Harlow is up there with the best. An absolutely stellar voice, not dissimilar to Anne Wilson from Heart with maybe a little more grit – when she lets rip, man, it is fucking awesome. A few ballad-ish and slower paced songs, but the up-tempo songs are definitely killer. Listen to ‘Chain Reaction’ and ‘Empty’ and lament the fact there weren’t more songs like that on this album. A second album would’ve been interesting, but they split up with Thayer ending up playing the part of Ace Frehley in Kiss.

Chain Reaction has a very memorable chorus, great song. I also enjoy Don’t say we’re over, which comes across as sincere and emotional.

Teresa Straley is one of the most awesome and astonishing vocalists I’ve ever heard. I’m a singer myself and this record changed my life when I bought it along time ago. Her lyrics and voice left me breathless and one morning I found her studio number, called her up, she answered herself, and I told her how awesome she was. Great record, songs and musicianship by Tommy and Pat and the gang. I saw Teresa live at a club and was blown away and so inspired as a musician myself.

The opening brace of songs are in a word…’wicked’. The beefed up riffarama of ‘Chain Reaction’, the immense atmospheric power of silence’ and the classic ballad ‘Don’t Say We’re Over’ all point to class emanating through the grooves. ‘When You Love Someone’ sounds unerringly like Hardline. The Eyes comparison is evident on ‘Beyond Control’. ‘Pictures’ sounds like Heart on steroids while ‘Edge Of Love’ weaves a melodic tale of balladry where Regans keyboards lay a nice backdrop.

This album is the world to me. The track pictures brings back memories of my now X girlfriend. I wish that I could have seen such a good group live. Teresa strawley has a voice to die for. The vocal harmonies are the best I have ever heard.

Heart meets Led Zep…”Edge of Love” is awesome and THE outstanding track!!!

I think this is a fantastic lp with the STRONGEST of female voices. Looking back, I think it just went over peoples heads. The musicianship is top notch, and again, Teresa’s vocals are outstanding. Grab this one if you’re into power and passion from a female voice.

It has wonderful songs such as the opener “Chain Reaction”, “Silence” (with a very sensitive lyric),”Don’t Say We’re Over”(beautiful ballad),the AOR-ish “Cry Murder” and a nice closing song “Edge Of Love” but perhaps these songs were overshadowed by bands or singers as Saraya (many pseudo comparisons here written) or Vixen and the same Heart itself.

The singer have a fantastic voice, the guitarist is a genius ,and the production is perfect. high class female hard FM album like Saraya or Femme Fatale for example. highly recommended!!!!!!!!

This self-titled debut album from Harlow was released in 1990. It is comprised of ten tracks. The material is in a straight-up hard rock musical direction. Keyboard work is in evidence, but it is spare. I find the song writing to be worthy, the musicianship to be solid, and the sound quality to be pleasing. Female vocalist Teresa Straley does a nice, impressive job. The cuts that I favor are “Chain Reaction,” “Silence,” and “Don’t Say We’re Over.” The energetic “Chain Reaction” sports a catchy chorus. The somber “Silence” displays industrious singing from Straley; also, her wordless vocal melodies are attractive. The plaintive, eloquent “Don’t Say We’re Over” features expressive, pretty vocals from Straley–her wordless vocal melodies are infectious, too. In addition, this song presents a charming intro and smooth keyboard playing. The disc is just over 50 minutes. This album is recommendable.

Harlow was another one of the “too tough for pop” rocker chick bands that seemed to be everywhere in the first couple years of the `90s. Like similar artists Saraya, Chrissy Steele, Cell Mates, and Skew Siskin, Harlow’s music was pretty straightforward rock & roll that bordered on being AOR.

enjoyable melodic rock album with some pretty impressive vocals. If you like your rocker chicks to, you know, actually rock, you’ll want to check this one out. 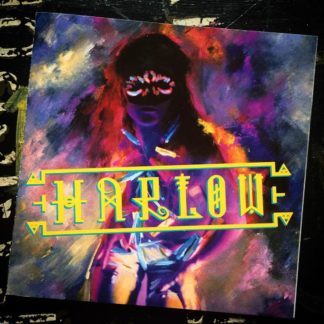