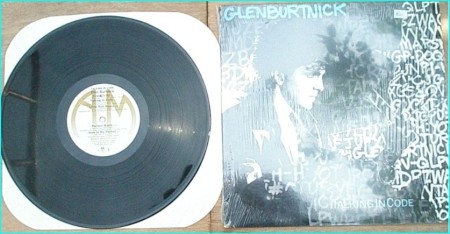 Glenn BURTNICK: Talking in Code [Very shout after A.O.R album. Rare. Glen Burtnick â a singer/songwriter born and raised in New Jersey, became a regular part of the Asbury Park music scene during the early eighties. Glen often shared the stage at the Stone Pony with the likes of Bruce Springsteen, Southside Johnny, âLittle Stevenâ Van Zandt and Jon Bon Jovi. It is a known fact that Bon Jovi asked Glen to join his new band before their ârunawayâ international success during the 1984-86 period. As the story goes, Burtnick declined, Bon Jovi, well.. the rest is history as they say. In the meantime, Burtnick managed to secure a solo artist deal with A&M Records, culminating in the release of two melodic rock classics âTalking In Codeâ and âHeroes & Zerosâ. This pair are considered to be compulsory items for the melodic rock collector. Both feature an array of talent. AOR legends Dann Huff, Alan Pasqua, Steve Smith and Neal Schon all chipped in.]

The 1st solo debut album of Glen Burtnick, who is probably best known as a former band member of Styx.
Glenn Burtnick was born in Irvington, New Jersey on April 8, 1955. Being the youngest of three brothers, he was forced by the other two to sing harmonies with them at an early age. By the time he was twelve, the Burtnick family decided to move to the Brunswick area of New Jersey. Realizing that a career in music was beckoning, he attended a â€˜be-inâ in Johnsonâs Park, where he performed a song he had written to anyone who would listen. Being almost thirteen years old, it was his first gig ever. After high school he wrote and performed a rock opera, called â€œThe Walls Of Waldenâ€, with his band Albatross. When he then saw a classified ad in the Village Voice asking for Beatle sound- and lookalikes for the Beatlemania show, he decided to seize the opportunity and answered the ad. He became a part of the west coast cast of the show and played the role of Paul McCartney. While still appearing in Beatlemania, he answered another ad in the Village Voice and became the vocalist of Hammer (the band of Jan Hammer), with whom he recorded one album and went on tour in support of it. When one of the other Beatlemania cast members was offered a record deal by Elektra for his band Helmet Boy, Glenn was asked to join in. A self-titled album followed a little later, but didnât do much and Glenn decided to return to New Brunswick, where he got married. He then began to play with local bands in the Asbury Park scene, among which the band Cats On A Smooth Surface, which was the house band of the Stone Pony club (where Bruce Springsteen used to play almost every Sunday). Around the same time he got acquainted with Jon Bongiovi. When Jon decided to form a band (Bon Jovi), he asked Glenn to join in â€¦ but he rejected the offer. It was around that time that Glenn also decided to decided to shorten his first name from Glenn to Glen.
Things gained momentum for Glen in 1984, when a demo that he had recorded came to the attention of an A&M Records executive. Impressed by the song â€œHere Comes Sallyâ€, Glen was offered a deal for two albums: 1986âs â€œTalking In Codeâ€ and 1987âs â€œHeroes And Zerosâ€.

Recorded with the help of such famous musicians as Dan Huff, Neil Stubenhaus, David Prater, Alan Pasqua and Jerry Hey (to name but a few) and produced by Richard Landis, â€œTalking In Codeâ€ is one of my all-time favourite albums. It contains ten songs, all written or co-written by Glen himself, that can be described as typical 80s AOR. With no fillers in sight, this classic gives you almost forty minutes of pleasure. Listening tips include â€œLittle Red Houseâ€, â€œBrave Heartsâ€ and the ballad â€œHeart On The Lineâ€.

‘Perfect World’ – One of the finest songs ever written (imo), is enough to make this an album you should have.