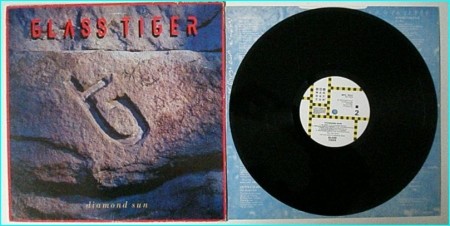 GLASS TIGER: Diamond Sun LP. CHECK VIDEO (Very -old- U2 like) and all other songs

Diamond Sun is the second album by Canadian band Glass Tiger. It was released by Capitol Records April 13, 1988. It went certified Double Platinum in Canada.

The harmonies, guitar, and violins are so beautiful in this song! I love the marching snare drum, and the man calling out…This song fills the room with musical confidence! I remember when I got the album…yes, ALBUM! a time in my life that I will never forget…The most perfect song. PERIOD.
————————————————————-
5.0 out of 5 stars DIAMOND SUN MADE OF PURE GOLD,
Glass Tiger songs are longing and nostalgic for those “”ancient evenings”” and equally as impressive are Alan Frew’s writing and especially unique soaring and heartfelt vocals. The other lads play at a more mature level of musicianship and “”Diamond Sun”” is definitely the greatest Glass Tiger song ever! A little bit of prejudice, I know =) But with lines such as: “”as with the shadows of lonely trees, we are in bondage but our hearts are still free”” ~ My God, what brilliance! “”I’m Still Searching”” is melodic and highly energising, not to mention the commercial hit of the album. Remember that classic video? “”My Song”” keeps the Gaelic heart of the band beating strong with The Chieftains playing along a catchy melody you will find yourself humming constantly! “”This Island Earth”” is haunting ~ Amazing! “”Send Your Love”” brings U2 to mind at first, but then becomes uniquely Glass Tiger. Alan Frew, as evidenced on the track “”(Watching) Worlds Crumble””, is one of the FEW male singers that can sing in falsetto and not sound like John Cleese impersonating an old woman in a Monty Python skit! This album is alive, breathing with emotion and impressive musicianship. The production is excellent, much better in the “”production”” sense than “”The Thin Red Line””. The instruments just sound better here. Let’s pray for a reunion of this brilliant band one day soon! Also, check out Alan Frew’s solo stuff if you are a GT fan. You won’t be disappointed mates!
————————————————————-
5.0 out of 5 stars A Grounded and Mature Progression,
Lack of airplay in the U.S. prevented this fine album from achieving the success it had in Canada, but for this American fan it is still a personal favorite. As a follow-up to Glass Tiger’s sparkling debut Thin Red Line, Diamond Sun is simpler and more down-to-earth in terms of production. The theme and rhythms of the title track alluding to Canada’s indigenous peoples introduce an organic feel that carries through to the joyful and good-humored “”My Song”” flavored with the music of vocalist Alan Frew’s native Scotland. “”Far Away From Here”” is one of their best pop/rock guitar-oriented tracks–and it is only available here, as the hits compilations neglected to include it. The exuberance of “”Send Your Love”” with its spirited vocal and fast driving beat is another highlight, as is the gentle introspective vocal on “”Suffer In Silence”” with its nicely done fade-out. Frew uses his powerful instrument with sensitive restraint as can be heard in the way he opens the first track and ends the last–creating a quiet thoughtful mood to introduce the album, and then as the final track draws to a close letting his voice fade into the background so the instruments can swell back in and have the final say. He doesn’t sacrifice the music for the sake of ego. The variety of tone, texture, and character in his voice is remarkable and rare–from the angelic falsetto of “”Watching Worlds Crumble”” to the earthy resonant grunt at the beginning of “”This Island Earth,”” and everything in between; the Beatles’ influence is evident here, and if McCartney was the master of vocal versatility then Frew is the star pupil who matured with Glass Tiger and comes to full fruition in his subsequent solo releases. For me, Diamond Sun is one of the musical high points of the 1980’s and I highly recommend it.
————————————————————-
5.0 out of 5 stars Diamond Sun Shines Brilliantly!, The depth and layering of their vocals coupled with the crispness of guitar riffs and a sharp precise percussion left a lasting impression on me. Diamond Sun was my first Glass Tiger purchase and their studio effort is exceedingly sharp and polished. Not quite a concept album, there is a theme.
————————————————————-
5.0 out of 5 stars Awesome – Extraordinary – Enthralling.
I was so enthralled by Diamond Sun… I play it all of the time. It is one collection that suits every mood. This Island Earth is indescribable, ethereal, mind-altering. I can only hope that the other collections by Glass Tiger are somewhat close.
————————————————————-
5.0 out of 5 stars GLASS TIGER! WHAT MORE CAN YOU SAY!! FANTASTIC!!,
Another Great LP From My Favorite Band! Since Living Here In Toronto, They Played Here So Many Times, And Having Been To All Their Concerts Here, There Is Just No Word To Express Just How They Rock The Place!! For The Life Of My Sanity, I Pray They would Get Back Together and Continue All The Greatness They started.”