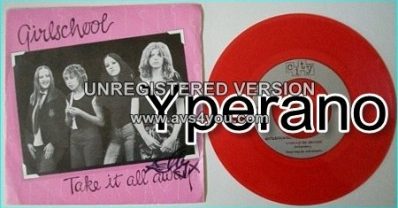 GIRLSCHOOL: Take it all away 7″ + It could be better. Red vinyl. SIGNED Autographed

Not as heavy as the album version a year later, but this indie release – essentially a demo – already shows all the razor-edged musical charisma that was to become a Girlschool signature.  Pure raw heavy metal! awesome!!

GIRLSCHOOL! Boy they were so exciting back in 1980. Hard and fast music coming from women. That was so fucking marvelous and Im not only talking about the erotically contexted phantasies that sprung out of these pictures (girls with long guitars and such, you know). Everything seemed possible, so it seems in the backsight, and who knows, maybe we really felt like that instead of just getting nasty ideas. I guess its kinda difficult to explain the sensation of the gender-factor in rock music of the late 70s / early 80s, as today were all bombarded by tits & ass.

What sticks out on this first release of GIRLSCHOOL is singer Di Williams voice and guitarists Kelly Johnson’s solo parts apart from that, this humble beginning of the band had little in common with what would come up next It could be better is the winner here. Reminds me of the RUNAWAYS a bit, but it sure ain’t as punky as I wish it would be. Nevertheless a fine record from when we all were a bit smarter than we are today.

Be the first to review “GIRLSCHOOL: Take it all away 7″ + It could be better. Red vinyl. SIGNED Autographed” Cancel reply 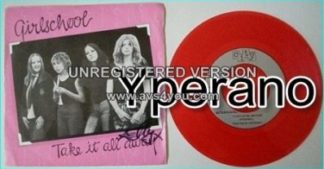 You're viewing: GIRLSCHOOL: Take it all away 7″ + It could be better. Red vinyl. SIGNED Autographed £18.00
Add to basket