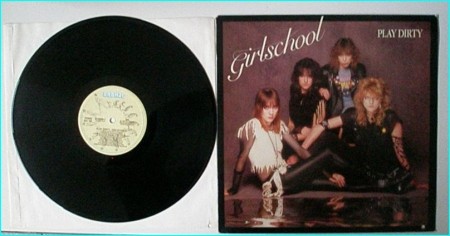 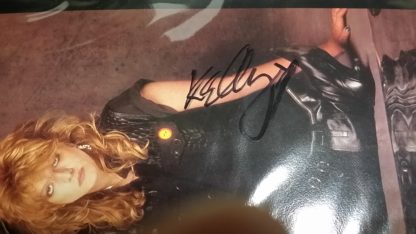 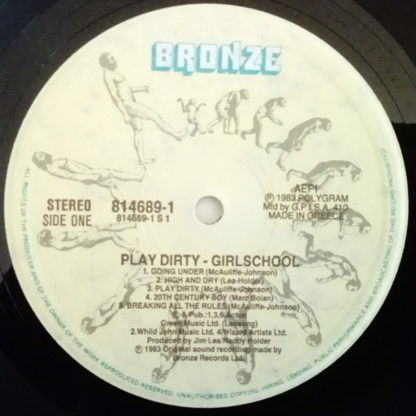 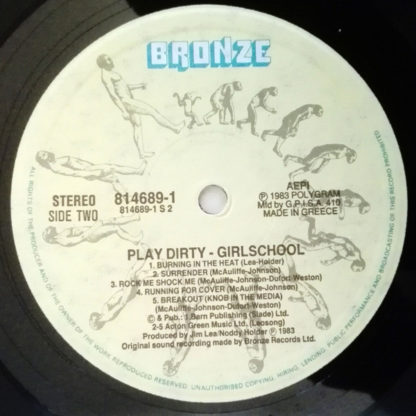 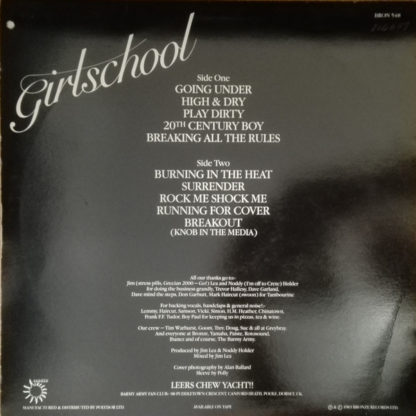 Play Dirty was the fourth studio album by British heavy metal band, Girlschool, released on Bronze Records in 1983 and produced by Noddy Holder and Jim Lea from the hard rock band Slade.
It was the first Girlschool album not to enter the UK Top 40 album chart

In the UK, three singles were lifted from the album, each having a picture-sleeve:
“”1-2-3-4″”/ “”Tush””/ “”Don’t Call It Love”” on 7-inch, the 12-inch adding “”1-2-3-4″” (extended version) and “”Emergency””. (1983)  “”Tush”” was a re-recording of the ZZ Top song the band covered on Hit and Run, with Kim McAuliffe on vocals instead of Enid Williams.
“”20th Century Boy””/ “”Breaking All The Rules”” on 7-inch, the 12-inch adding “”Like It Like That””. (1983)
“”Burning In The Heat””/ “”Surrender”” as both the 7-inch and 12-inch single release. (1984)
it ALSO HAS a stellar, sax-heavy cover of T. Rex “”20th Century Boy””.  Girlschool did a number of impressive covers during their career, but this is a personal adrenalin high favourite. Boys as toys. Geddit? Believe it or not, this version actually maintains the crushing sloppiness of the original. For everyone who has had wet dreams of Joan Jett covering this song, this should be a welcomed substitute.

5.0 out of 5 stars Awesome Rockin’ girls
This is a great album that i had in the 80 and recently bought again. They really rock!!! music style like Def Leppard or something like that!! A 9.5 /10

5.0 out of 5 stars a classic that still rocks
Girlschool put out three classic discs and then this one which was slicker and produced with a more Def Leppard style than the other three. And it pulls this off nicely, there more standard hard rock songs on this one than the first three discs but Girlschool is such a great group that this is well worth owning. It enjoyable and rocks hard in that great 1980 style. If you enjoy melodic metal then this group is among the best at it and someday people will realise this universally.”