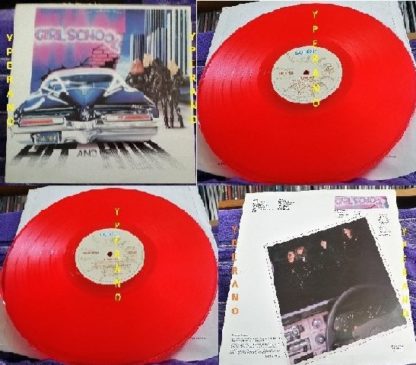 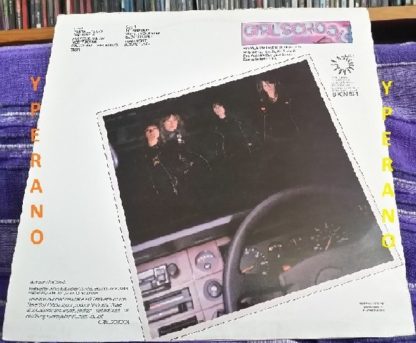 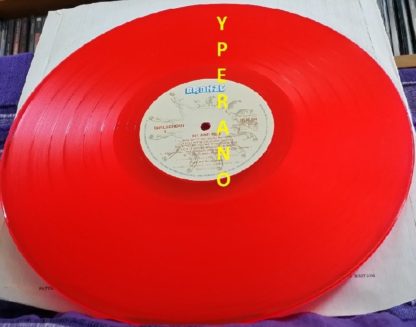 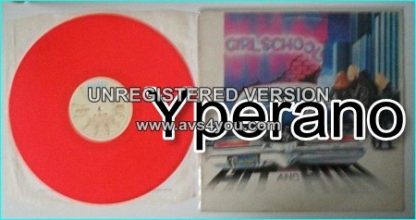 A solid record that delivers, as the opening singalong salvo “C’Mon Lets Go” proves.The sheer energy is carried over from the success of Demolition and the St. Valentines Day Massacre collaboration EP with Motörhead.
Hit and Run is the second studio album by British heavy metal band, Girlschool. It was originally released on Bronze Records in 1981, UK catalogue number BRON 534, having been recorded at Jacksons Studios, England, in December 1980 and January 1981. There was a limited pressing in red vinyl (on sale here too).
“Tush” is a cover version of the famous ZZ Top song.
The title track was released as a single, the 7 inch c/w “Tonight” (Bronze BRO 118) and the 10 inch adding “Tush”. The song was a hit in the UK and the band appeared on the BBC show Top of the Pops

5.0 out of 5 stars “Oh yeah that chick band on my Motorhead album”
they put this one out in 1981, one of the peak years of the New Wave of British Heavy Metal, which is exactly what this music is. So there are a few things that it isn’t.
This is old-school, wheel to the ground, smashing, thrashing, in-your face New Wave of British Heavy Metal like it has rarely been done since around 1980. If you have and love say, Killers by Iron Maiden, Ace of Spades by Motorhead, then this rerecording was made for YOU. Listening to it took me right back to the first time I listened to any of those albums in the 80s. Every single song smoked and sizzled, made your hair stand up and made you say “[…] YEAH!!!”
5 stars? Absolutely! I’ll be adding some notes about each song below. Meanwhile, if this review has resonated with your musical tastes, be good to yourself and pick this up.
C’MON LETs GO
The motorcycle engine starting impression done on guitar! Then comes the pounding, baby! (Denise you punish the […] out of those skins the whole album. You rock like no other, and thats why I love you so very, very much.)
The punk roots of NWOBHM really shine through on this song, and the vocals give just the right amount of added grit for the perfect way to kick off a kick [ass] album.
THE HUNTER
The way the chords integrate on this song really reminds me of Scorpions, and the song could have gone right on Scorpions Blackout album and kicks just as much.
(I’M YOUR) VICTIM
You definitely get a thoroughly sizzling beginning to an incredibly heavy song, definitely on par with anything on Appetite for Destruction, which came out in the late 80s. It wouldn’t surprise me at all to hear that G & R cite Girlschool as one of their influences. Violently heavy! The vocals give a little grit on this song, though mostly the vocals on this album are just straightforward in a way thats kind of surreal given the incredibly heavy sound overall on this album.
KICK IT DOWN
Here you’ve got another song that starts like a bat out of hell! This song could have gone right on Ace of Spades (yeah, its that good). Its at least as heavy as anything there, with skin pounding and a totally relentless twin guitar attack throughout. There could definitely be some mutual influence between Motorhead and Girlschool, and I know credit, well its blame actually, is given to Lemmy inside the cover for his support over the years.
FOLLOWING THE CROWD
This is one of the two more contemplative songs on the album, still heavy as […]. The vocal style is straightforward here, very pretty and feminine–really nice vocals, and fits in great with this heavy number. There seem to be a lot of minor notes and theres a haunting feeling you get listening. This song doesn’t remind me of any other band, but stands up to anything else on the album. Love this one.
TUSH
Obviously this is the cover of the ZZ top song, heavy as anything, and with 2 guitar solos. […] that was heavy! Definitely feeds the beast and I can always relate to what they’re saying here.
HIT AND RUN
This is yet another totally killer track taking us to 7 straight. If this doesn’t earworm on you then something is really, really not right. I LOVE the guitar solo and how its backed up–makes my hair stand up every time, just mighty! Again, I’m reminded of G&R. Or, more accurately, G&R reminds me of this. Theres a way that for G&R, when they are at the top of their game, their songs don’t *play*, they rage. Violently heavy is the only way I can describe it.
WATCH YOUR STEP
Just as on the opening track you can really hear the punk influence in this fast-paced rocker. But punk is maybe more than just an influence here. The song opens just like you might expect something off of G & R Appetite for Destruction, and never lets up from there.
BACK TO START
This is the other contemplative song on the album, contemplative, not *soft*. Nothing can celebrate that chaotic beauty that is electric guitar like open chords. Think of Running With The Devil, by Van Halen, the opening and choruses, how all it takes is some open chords sizzling in the air and the song shreds! I like this song in the same way as that VH number. This song really stood out to me right way first listen of the wholererecorded album, and I also love the gentle, straighforward vocals that sound so good against the heavy-as-[…] instrumental rhythm. I love, love it!!!
CAN’T DO THAT
This is the nod to been-there-done-that-don’t-even-go-there-get-out-of-my-face-you-middle-aged-mother […] teenage rebellion! This song got a lot of attention I gather when the original version came out in ’81. I think I can here accents a little bit this time around. When they say “Yeah, Right!”, it falls somewhere between “Yeah, right”, and “Yeah, royt!” Love their accents, so cute, haha. And you’ve got another really smoking guitar solo coming at you again. I’m telling you that you really gotta be ready when you put this album on. The soloing is great not for its technicality, but for how catchy it is and how well it fits in with the song. If you like that about Fast Eddie, you’ll be in your element listening. (Oh Girlschool, stay with this sound and don’t ever change!)
FUTURE FLASH
Heavy rhythm and gritty vocals and some sinister touches support the refrain “Out to get you”, and the guitar solo will drive home the urgency of the situation. Again, bearing in mind that all this material long preceded anything by Guns and Roses, this song rocks in a way where it would hold its own against anything on Appetite, for thrashing, smashing–for anything. I would seriously LOVE to hear G & R covering Girlschool, and vice-versa.

Obviously, its my hope that you buy this and enjoy it as much as I did. I think it will help make your year.