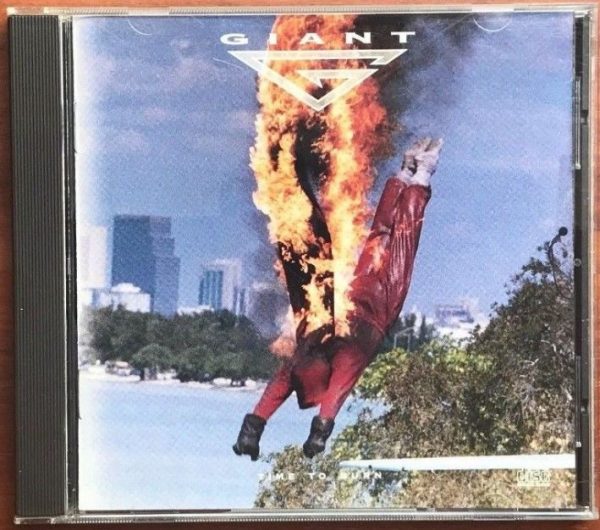 Time to Burn is the second studio album by Giant, released in 1992.
Vocalist/guitarist Dann Huff had proven his guitar-playing chops as a studio musician on hit albums and singles across the popular music spectrum throughout the 1980s before starting a band with brother David on drums, Mike Brignardello on bass and Alan Pasqua on keyboards and scoring a hit of their own with “I’ll See You In My Dreams” in 1988. For the follow-up the band was joined in the writing process on two songs by Jim Vallance and on four by Van Stephenson, the latter of whom also guested on background vocals in the studio. Huff had previously done guitar work on Stephensons solo albums. It was produced by Terry Thomas, a former member of the band Charlie who had previously produced albums for such rock notables as Bad Company and Foreigner.
Although well-reviewed, Time to Burn was among the last of its commercial AOR/melodic hard rock genre to be released by a major label and not the label of their previous albums record companies and media outlets stopped promoting ’80s artists in favor of newer grunge styles. The albums most successful single was “Chained”, which peaked at #16 on the Billboard Mainstream Rock Tracks chart, although second single “Stay” received some airplay as well.

5.0 out of 5 stars Incredible melodic rock,
ans on sites …raved about this band and this album, …. This album is incredible.
How can you go wrong with rockers like “Chained”, “Lay It On The Line”, and the title track? All have over-the-top melodic vocals and instantly memorable hooks. Ballads like “Stay” and “I’ll Be There (When Its Over)” also represent the best of what this genre is about. “Stay” is one of the best power ballads I have heard in years. Too bad it wasn’t a hit, but it sure will make it on a future burned CD music mix of mine. “Lost In Paradise” is another exceptional song, the epitome of a great rock anthem. Comparisons to Def Leppard in their prime are valid when I think of songs like this–and coming from me (a huge Lep fan) that is a compliment.

I strongly encourage all melodic rock fans to pick this one up. At least as good as most popular rock album put out by ’80s “pop metal” bands, and better than plenty of them.
————————————————————-
5.0 out of 5 stars One of my favourite Hard Rock CDs – the best in hard times
I first heard this CD while lying in bed with a stomach upset, but it quickly kicked me out of it – the bed and the trouble! I put ‘Time to burn’ in my player. What a difference. The ballads ‘Lost in paradise’ and ‘Now until forever’ even speaks more to my heart then Klaus Meines wonderful sung still loving you.’ ‘Lost in paradise’ has more tension, more sorrow, more feeling.
Yes, this Rock sounds like the 80ties, but isn’t that great? I can’t hear those heartless soul’, Hip-Hop, Rap, Techno any more and good rocksongs have been destroyed by the silly techno beat with weak voices. Some songs are really fast and you can sweat in deep winter while dancing. Its a lot more power than Bryan Adams and Bon Jovi have in the 80ties, not talking of them in the early 90ties. (Then I dropped my interest in their music.)
Real ‘Hard’Rock, melodic, sometimes aggressive power, but never trashy…
————————————————————-
5.0 out of 5 stars STILL BURNIN’ HOT…
Dann Huff, David Huff, Mike Brignardello and Alan Pasqua had the difficult task of puttin’ out a follow-up album to the wonderful LAST OF THE RUNAWAYS. Many thought they couldn’t quite do it…they were wrong.
TIME TO BURN, Giants 2nd effort is a great AOR album, from the opening “Thunder and Lightning” to the killer “Get Use To It”.
The albums agreat collection of AOR anthems, almost all co-written with the help of Brit producer Terry Thomas (Bad Company, Foreigner). The result is not as wonderful as it was on the first album (where almost 90% of the songs were co-writen by Mark Spiro), but it goes highly recommended.
“Stay” was the promo single for the record (though it had a different version, with more keyboards, and it was shorter in length).
“Now Until Forever” is a killer ballad, where “I’ll Be There (When Its Over)” and “Without You” come as close as a radio-friendly AOR track could get.
Great AOR music, great production…get it now !!!
————————————————————-
5.0 out of 5 stars Time to Burn is a perfect example of melodic rock at its peak.
Before forming Giant, frontman Dann Huff was an in-demand session musician. He worked with such music heavyweights as Michael Jackson and Amy Grant. Huff decided to team up with his brother Dave and signed a record deal in 1989. Their first single “I’ll See You in My Dreams” actually cracked the Top 20. Sadly, the album didn’t sell that well. Giant returned in 1991 with Time to Burn.

“Thunder and Lightening” kicks things off with energetic guitar and pounding drums. Dann Huffs vocals are the pinnacle of 80s melodic rock. The twitch of the keyboard adds just the right texture. An extended acoustic jam leads you into the powerful chorus of “Chained.” Huff pushed his range to the limit on the harmonic bridge and chorus. Its another round of melodic fury on “Lay It On the Line.” Despite the chunky riffs and pulsing keys, the track has just a hint of the blues.

What would a rock album from the 80s be without a power ballad? “Lost in Paradise” is an emotional track driven by keyboards and Huffs throaty vocals. Lightening quick guitar licks and driving riffs run rampant over “Time to Burn.” “Without You” returns to the power ballad format, but with more guitars and more regrets. The chorus is an over-the-top emotion-jerker. The album concludes with the same energy it started with on “Get Used to It.”

The band disbanded shortly after the release of the album. They did release a few albums here and there over the years, but Dann Huff returned to session work. He went on to work with Shania Twain, Michael W. Smith, and also produced two Megadeth albums. The list of people Huff has worked with goes on and on, and their all big name artists. If your wondering about Huffs associations with Smith and Grant, he is a devout Christian and was part of the Christian rock band White Heart prior to Giant.

The Verdict
I found this album at a yard sale three years ago and haven’t stopped listening to it since. I honestly never heard of Giant before I picked it up. I can’t believe how much of a melodic rock masterpiece this album it. The guitars are mighty, the vocals are powerful, and the hooks and riffs are plenty. Time to Burn is a perfect example of melodic rock at its peak.
————————————————————-
5.0 out of 5 stars In the category : The Best of the Best,
Well it is!!!, it cant get any better than this, this also applies to the other album (Last of the Runways). I still remember the first time i’ve heard these guys, I got the tape from a friend in high school back at the days were I used to live in Baghdad, Iraq. With the first song, they jumped up there with Europe, Scorpions, and Whitesnake. The lyrics are amazing, and the only thing thats better are the guitars rockin & rollin. Too bad they departed, but I guess thats what happened with all the 80s great H.Rock bands.
————————————————————-
5.0 out of 5 stars As good as the first and as good as it gets,
Giants 2nd dics is as great as the first. Although Dan Huff provides explosive guitar work its the songs that count. I can listen to Giants two discs all the time and never grow tired of them. I can’t believe its been over 10 years. Dans into the production world now (country music and pop) but I sure hope he and the boys come back. Excellent.
————————————————————-
5.0 out of 5 stars Giant
A true hard rock classic! One listen to “Chained” and you’ll be hooked! Dann Huff is one of the best guitarists and singers on the planet. True talent at its best, right here.
————————————————————-
5.0 out of 5 stars This CD rules!,
Once again, the greatest rock band to ever not make it big puts out an outstanding effort. I love the hard rock songs, but I have to take issue with the critic above when he says the ballads are their weak spot. I think they’re just as dynamic and thundering as the faster songs. Whats wrong with a powerful love song???? This CD is a worthwhile addition to your “turn it up” collection. You’re guaranteed to dig it.
————————————————————-
5.0 out of 5 stars Great music from early nineties,
Giant, was ahead of their time, or should I say, at the end of their time. Pop metal was just replaced by grunge. This, was the best of its kind and I have many fond memories listening to this music as a young man in my twenties.
————————————————————-
5.0 out of 5 stars Oh man, this is some hot music!!,
Please buy this album so you don’t miss out on one of the greatest albums of all time. Seriously, this music is perfectly written and performed by a very professional band. Dann Huff is one of the best guitarists of all time and his singing is so passionate its unbelievable. I’m not going to write too much more except to say that this is right up there with the best melodic rock ever made. Listen and enjoy!!