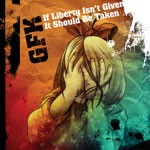 GFK: album If Liberty Isnt Given, It Should Be Taken CD Relentless BUT intelligent blend of hardcore metal. Check samples

GFK: album If Liberty Isn’t Given, It Should Be Taken [In a genre replete with chest-thumping machismo and vapid, meaningless bullshit, GFK are a something unique – a head-on, relentless blend of hardcore and metal that actually manages to thoughtfully and intelligently address issues of relevance to anyone living under the current downward spiral of neo-liberal capitalist globalization. Formed in 1996, GFK have spent the last 8 years touring around their home province of QuÃ©bec, building a strong following and growing as a band. In 2000 they released their first album The Social Responsibility Theory on their own New Horizon label, followed in 2002 by In Defence of Politics. Their new album If Liberty Isn’t Given, It Should Be Taken is arguably their best and most representative to date, marrying razor-sharp guitars and vocals, machine-gun double kicks and passionate, insightful lyrics like only five dudes from La Belle Province could. GFK have toured extensively in Europe with the likes of Snapcase, Darkest Hour and boysetsfire and crossed Canada twice playing shows with The End and Alexisonfire