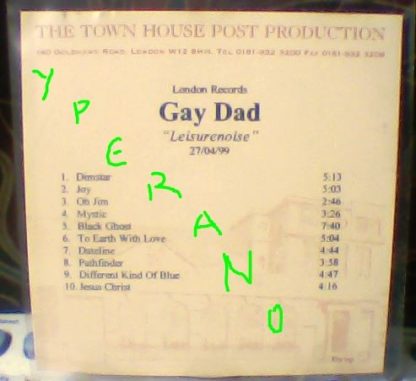 Leisure Noise is an album by Gay Dad released via London Records in June 1999. The album is an art-pop blending of glam rock, psychedelia, krautrock, gospel into indie pop. Lyrically it is often about and constructed of rock history. The track-listing was designed to mimic the traditional two-sided vinyl.

5.0 out of 5 stars Gay Dad Rule!,
“Leisure Noise” is a great album full of great guitar pop songs. The obvious stand out track is “To Earth With Love” which was is one of the greatest singles I have heard in a long time and was the reason I bought the album. This album has no fillers just brilliant songs and that is the reason why it is rarely out of my stereo.

5.0 out of 5 stars “Great” DAD, s
This review is from: Leisure Noise (Audio CD)
“Black Ghost” has to be one of the best pop tracks I’ve heard in years. If you like OASIS, buy GAY DAD “Leisure Noise”…you will not be disappointed!

5.0 out of 5 stars Once Again, Excellent British Pop/Rock,
I came across this album totally by accident. I didn’t know anything about this band prior to that. But the music did it. The songs are very interesting melodically and the overall musical production is of high quality. Did I mention that the vocals are excellent too? Its rare to hear such original music that is so well rounded and nicely packaged. Jesus Christ is the ultimate track on this album in my mind. It fits right into the classic Pop/Rock hall of fame with other classics from The Beatles, Queen, Oasis and so forth.

5.0 out of 5 stars PURE POP PULP,
This CD is exquisite. “Jesus Christ” is the slow build anthem Live was never smart enough to write. “Dimstar” is an alternative gem. “Black Ghost” is the delicious indulgence that drops us in our tracks w/ its melody. This album is one bad song short of genius. Enjoy. Impress your friends.

5.0 out of 5 stars Lost classic,
Its a shame that their name caused people such a problem because Leisure Noise has become a lost classic. To call it Brit pop fails to express the range of styles mixed together but I guess calling it a ‘Kraut-rock-glam-funk-blues-gospel-Electro-pop’ album would take to long.
Containing the UK hit singles ‘Joy!’ and ‘To earth with love’ you expect to get a glam-pop album but using the above styles leisure could be best described as ART-POP in the style of Roxy Music. So we get the white-boy-blues of ‘Oh Jim’ and the kraut-rock chill out of ‘Black Ghost’ thrown together.

In fact the whole album is 50 years of popular music cut and pasted into forty five minutes, David Bowie, Aerosmith, Lou Reed, The Furniture, Art, Richard Hell, Prince, Iggy Pop, Sly & the Family Stone, Queen all appear in one form or another.

Like Bowie, the Beatles, the Beach Boys, Gay dad have understood the experimentation sit hand in hand with classic pop.

So the name annoys a bunch of boring old farts, so what, This isn’t a book cover judging competition, This is music for music lovers, mind you as far a covers go Gay Dad so have a nice one.

What a name, what a band!

5.0 out of 5 stars Gay Dad Is Good,
I really enjoy this CD. Its upbeat, and the music is really catchy. Its easy to sing along to, and a lot of fun to listen to. Gay Dad shares that special something that a lot of British music groups seem to have. I recommend Gay Dad to anyone who is searching for a fun, enjoyable CD, and a new band to follow.

5.0 out of 5 stars great album,
this is a beautiful pop album. reminds of why i prefer British pop to the american three-chord crap. The name “Gay Dad” may be the only hindrance to what is a great new band. luscious soundscapes prevail on Black Ghost…..can you hear the operatic touch in the background? 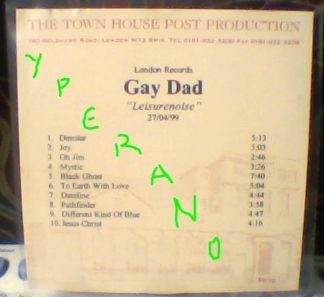