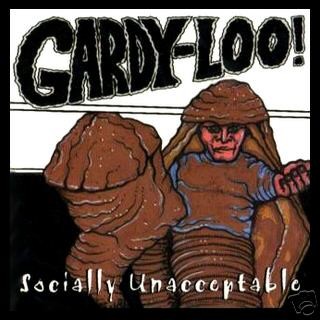 Check out the tracklist:
01. You’re Nothing But a Piece of Shit 02. Gibsonton 03. I Hate You 04. Killling Spree 05. I’m Still Alive 06. I Like Shit 07. Reflections of Mormo 08. You’re Gonna Die! 09. Land of Lies 10. Garbage Dump 11. Gardy-Loo! 12. Why? 13. Devil on the Block Total Running Time: 52:51
Plus 3 unnamed bonus tracks
These guys recorded the CD with the late master of shock rock, El Duce from The
Mentors. These guys are sick, twisted degenerates who write songs about things
that most people would never even talk about in private. The song lyrics absolutely kill. You will be laughing out loud until your stomach hurts. Musically these guys cross back and forth between punk and metal. I heard a Slayer-ish riff in “”You’re Nothing But a Piece of Shit”” and several old-school thrash riffs throughout the disc. In the CD booklet one of the guys is wearing an old Exodus T-shirt. Anyone who likes Gwar, The Mentors and Green Jelly would definitely like this. Jake Crash â€“ Vocals, Ben Meyer – Guitar, Vocals, Richard Bateman – Bass, vocals, Dave Silverthrash â€“ Drums]

Gardy-Loo! was formed in June of 1990 when Nasty Savage called it quits. Ben Meyer, Richard Bateman, and Craig Huffman decided they were due for a change. They wanted to start a whole new band with a different style and musical direction. The first thing on the agenda was to choose a name-Gardy-Loo! was the ticket! The term Gardy-Loo was used in England before the invention of modern day sewage facilities. On page 131 of the brilliant novel Ghoul, author Michael Slade describes the terms origin. Even walking down the street in those early days was a hazardous pastime. British in-house facilities then consisted of a chamber pot, the contents of which were tossed out the window to a cry of Gardy-Loo! This came from the French term Gardez leau and God help the Englishman who wasnt bilingual. The term is still used today in going to the loo. Gardy-Loo! has a musical style as unusual as the name. Every song has a different musical direction , lyrics that cover sick, diverse amusing topics, With song titles such as Brown Nose, Cellulite Junkies, The Fart Song, Whores, Sluts, Lesbians, Squeal Like a Pig, First Shit of the Morning, Sausage Party, Virgin, Fuck You in the Ass, Pot, and many more. The main intent for the audience is to laugh and have a good time. In December of 1990 Gardy-Loo! played its first show and the stage antics, and props started flowing right away. The 2nd show played was with Pantera and Deicide. Since then, Gardy-Loo! has played over 500 shows all over the USA, with bands such as Obituary, Bio Hazard, Murphys Law, Mentors, Iced Earth and many more. Gardy-Loo! and has recorded 6 different releases. The first demo tape Gardy-Loo has sold over 3000 copies. The second release Stool Sample was painted by the famous serial killer John Wayne Gacy, The 3rd release was called Florida, The 4th release was called Campfire Goodies, it has the song fuck You In the Ass used in a surfing movie called Fugit and has the famous comedian Pretty Paul Parsons who performed on the song Gerbil which has got a lot of airplay. He is now on George Carlins label called Laugh.Com. The 5th release was called Perverts on Parade and was done with the famous El Duce who was singer for the Mentors. He got ..40 in the 100 sleaziest moments in rock, which is in the Spin Mag. He was considered a punk-metal smut lord and became famous when Tipper Gore considered him a poster boy of what was offensive. She was the spokeswoman for the PMRC in the mid 80s and was quoting lyrics that he wrote Anal Vapors in a congressional hearing. He was accused of killing Kurt Cobain and appeared in the movie Courtney & Kurt. Eight days later he was struck by a train. We sure are gonna miss him. R.I.P. Gardy-Loo! has just finished their 6th release called Socially Unacceptable and just signed a deal with Crookd Records to release it. Socially Unacceptable will combine the very first demo on cd along with a surprise. Crookd records also signed a deal to release Stool sample and Perverts on Parade Gardy-Loo! wants to thank everyone for the support throughout the years. The current line up is: Ben Meyer- Guitar and Vocals Richard Bateman- Bass and Vocals Chris Maraman-Drums and back up Vocals Andy Adcock-Guitar and Actor Jake Crash- El Duce Impersonation and Vocals 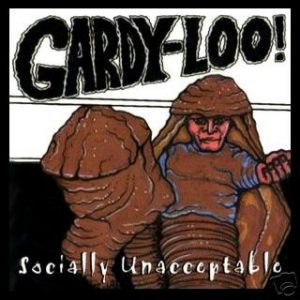