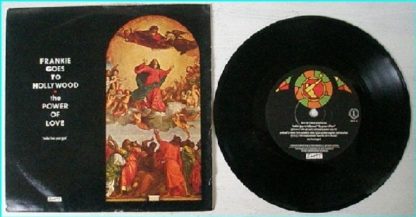 FRANKIE GOES TO HOLLYWOOD: The Power of Love 7″ Check video

Above is the original video for Frankie Goes To Hollywood’s 1984 seasonal Number One, The Power Of Love. Not ostensibly a seasonal song, it has become one of UK’s favourite festive sounds and that journey began with this clever and highly evocative promo.

TRACKLISTING:
1. The Power Of Love
2. The World Is My Oyster

Frankie goes to Hollywood built the beginning of their career and their first three single releases on the three pillars of controversy: sex (‘Relax’), war (‘Two tribes’) and religion (‘The power of love’). This third single was a stark contrast to the busy, almost aggressive songs that went before: it was the epitome of tranquility.

The music video accompanying the single was directed by Godley & Creme and told the nativity story. The sleeve of the single featured the Assunta by Titian, a XVI century painting in the Basilica di Santa Maria Gloriosa dei Frari of Venice. In the UK an extra outer sleeve (pictured above) was added, wrapping up the single like a Christmas present. The single became the UKs Christmas number 1 in 1984 and reached number 9 in the Dutch Top 40.

Don’t forget to view the other FRANKIE GOES TO HOLLYWOOD items in our store.

Be the first to review “FRANKIE GOES TO HOLLYWOOD: The Power of Love 7″ Check video” Cancel reply 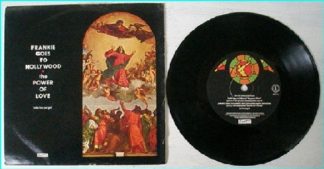 You're viewing: FRANKIE GOES TO HOLLYWOOD: The Power of Love 7″ Check video £1.80
Add to basket