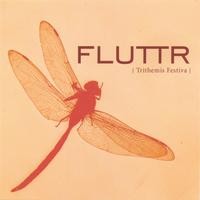 FLUTTR EFFECT: Trithemis Festiva CD. no one else out there doing quite what theyre doing PROG CHECK AUDIO SAMPLES

Recommended if you like:
Faith No More,
King Crimson,
Tori Amos,

There’s truly no one else out there doing quite what they’re doing with their combination of art, Rock and passion. Cincinnati Citybeat
“”…mind-blowing””
Most bands in this world would rather wrestle venomous reptiles than take to the stage with something as anomalous as this cello-driven, bass-less performance. But this is Fluttr Effect, and Fluttr Effect is nothing like most bands.
“”Trithemis Festiva, the debut album from Boston’s Fluttr Effect, is so dense, multifaceted and rich in musical adventurousness that it’s difficult to categorize. Which makes reviewing it a royal pain in the ass.””

author: David Curry
The opening bars of “”Transmission”” erupt with a barrage of Jason Marchionna’s gattling-gun kick drum and Troy Kidwell’s power chords that set the tone for the whole album’s torqued-up art-rock extravaganza. Once your attention is hooked by the initial onslaught, Kara Trott’s fluid vocals steer the song into radio-friendly pop territory that churns with Val Thompson’s rosin-rich cello and the effervescence of Vessela Stoyanova’s classic marimba sound interwoven with electronic sparklers. Slipping almost imperceptibly in and around the cracks are Troy’s sinewy guitar lines, like the clear nylon thread that laces it all together. Ending where it began, the song delivers a final punch that segues immediately into “”Flann O’Brien””. One of three tracks from a prior CD, FLUTTR demonstrates their ability to reinterpret previous works and cast them in fresh light. The mood of “”Flann”” is a stark contrast of tense restlessness and cascading beauty that dovetails with the lyrical theme of city drudgery set against aching memories of living closer to the earth. Now imagine Pat Benatar at her edgiest, fronting Nirvana — that’s the gist of “”I Want You Now””. Dripping with the thickness of unrequited desire, the song showcases Trott’s stage personality as the schizoid seductress, propped up against a wall of grinding guitar and bass-heavy cello. “”Tarantula”” is FLUTTR at its instrumental finest. Gothic in proportions and pile driving with relentless energy, the band propels itself through this quick but muscular prog rock gem from their first CD. Laden with near-Eastern influences, the strings coil themselves tightly around sledgehammer rhythms. Taking its time to stretch and breath, “”Prison”” evolves gradually on the staccato punctuation of Marchionna’s frame drumming. Trott’s wailing voice rises up as from a minaret at dawn, building with intensity as the piece gathers momentum in a wave that crests and crashes down to retreat once more into a mournful sea. Originally the follow-up to “”Tarantula””, the lurking “”Segue”” now breaks out of the backdoor of “”Prison”” like a viscous instrumental backlash against the oppression voiced so hauntingly in the preceeding track. The original version of “”Say Goodbye”” was perfect in its straight-up, gritty depiction of global cataclysm. The more polished rendition on Trithemis Festiva adds more dimension and texture to the song, but somehow with all the extra production, it doesn’t carry over the raw immediacy of the original track. All the more reason to buy both CDs so you can compare for yourself. On “”Meaningless””, FLUTTR starts to exercise its liberties with compositions of greater breadth and complexity. Jungle drums roll in from the distance to give way to the juggernaut’s stomping beat that sets the beast in motion, its killing jaws open wide. When the vocal’s urgent pleas to “”burn me, bathe me in sunlight, wash me with pain”” finally echo away, a discordant interlude sets the stage for the album’s coup de grace. Detrimentalisman”” pounds away like a hulking machine beneath Trott’s razor-edged chants in mantra-like Japanese. The storm mounts to a gale force, pausing only briefly to let the listener catch a breath before the winds kick up again and drive home the towering finale. I won’t say much about the “”hidden”” track, other than “”chilling””. You’ll have to discover this one yourself. Bottom line: if you crave intelligent rock and roll, buy this album. And once you’ve done that, go see FLUTTR live. This is a rising star you won’t want to miss.
weee yo! chucka

author: Lemmy
Fluttr rules! Trithemis Festiva is a really cool record. Earl bought a Latin-to-Piglatin dictionary. He is translating the title… I am not asking… I just put “”I Want You Now”” on repeat, close my eyes, and let it go… and then we saw the band live. Ohhhhh. Hott! HOTT! And the merch: have ya seen the merch, yet? Creative is an understatement.

author: Young Prof
I love this band. And the cd rocks. Through out the recording I NEVER miss the bass player. It’s so musically rich that you just don’t notice it because there’s absolutely nothing missing from this recording. Very unconventional but musical. Art rock or prog rock without all the needless notey wanking typical of the genre. Grreat band and great record.”

Be the first to review “FLUTTR EFFECT: Trithemis Festiva CD. no one else out there doing quite what theyre doing PROG CHECK AUDIO SAMPLES” Cancel reply

You're viewing: FLUTTR EFFECT: Trithemis Festiva CD. no one else out there doing quite what theyre doing PROG CHECK AUDIO SAMPLES £7.00
Add to basket