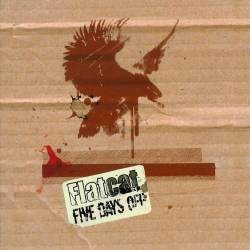 On this split-CD, a collaboration between Funtime Records and Eye Spy Records, two of Belgium’s most renowned bands offer four songs each. Flatcat false start the album
immediately with a totally convincing distillation of what modern punk rock is all about. Feeling at ease in the middle between Green Day and Bad Religion (just check out the backing vocals), with an occasional lyrical nod at. Although Flatcat sometimes also play faster, their sound is always very polished, especially the vocals that seem to have been treated ever so slightly to make them even cleaner. The backing vocals are provided by the singer from Janez Detd. If punk means to you anarchy, Discharge and Exploited, then Flatcat are nothing but wimps to you, but if punk is something more malleable to you, something that can have many different faces, then you might enjoy Flatcat’s professional attitude, and it wouldn’t be such a big surprise to see them on one of the bigger labels (Fat Wreck, Epitaph or Victory) in the near future.

What can you expect when one of Belgium’s most renowned label (Funtime Records) teams up with a small and steadily growing label called Eye Spy to unite two of Belgium’s most prominent punk rocking acts on one CD? Well, to me it’s like a late Christmas present, and one well worth the wait.

First band to arm the cannons is Flatcat, who have been clawing their way up from nowhere for about ten years now, releasing a promising debut full length album that offered them the opportunity to run amok in Brazil (of all places) during two different periods in time, playing for no less than 3000 people at times. I have seen these guys on numerous occasions, and they recently played in the Magdalenazaal in their hometown of Bruges, which is a concert venue where a lot of renowned Belgian artists (not necessarily punk rock tainted) have played, and strangely enough Flatcat was the first band that was able to fully pack the place, as no less than 900 people showed up for a club show of a small punk rock band from Belgium. Quite a feat! This just to show how much respect there is for Flatcat around these regions. Anyways, these new tracks, whom weren’t recorded at Dirk Miers’ (call him the Ryan Greene of Belgium) DÃ© studios but at Motormusic Studios with Raf Roesems (neither of whom ring a bell to yours truly), finds Flatcat in a slightly altered state. The songs are more polished overall, which serves their Californian influenced Fat Wreck-No Use kind of style just right. Throughout the 4 tracks, Flatcat delivers likeable, easy listenable and poppy sing along tunes that easily stand their ground in comparison to their oversea counterparts.

“Hear Tonight” is just a testimony of this easily listenable aspect as the slick mid-tempo paced track would be a nice choice as a single and the socially engaged aspect gives the song some weight. “Nothing To Prove” is a ballad-like track once again, as Flatcat clearly let go of the gas throttle in comparison to earlier stuff. Maybe they’re just getting old, I don’t know. I kind of miss their more weighty and punchy tracks with a more “truer” punk flavour (if there is even such a thing but you get my drift). It is obvious though that Flatcat feels at ease in their new form, and “Anniversary Song” is a testimony that they haven’t lost their touch with their roots just yet, as it is the most punk rock-tainted composition to be found here, and at once my favourite track of the album that at once is a tribute to everyone that supported them throughout the years. Minx’ sugarcoated voice is backed up by Nicolas from Jane’s Detd on several occasions throughout Flatcat’s contribution to this split and I must say I would like to see a more extensive collaboration between those two frontmen (like Joey Cape meets Tony Sly) because I think the outcome might surprise a lot of people. The only reservation I have towards these new songs is that maybe they are just a little “too” polished because I would have liked to see them spiced up a little more with the raw edginess that could be found on their debut full-length and which they hint at with “Anniversary Song”. Another things that I can’t relate to is the lyrical aspect. The first track hints at social engagement but I find the rest of the tracks rather unfulfilling after my taste and rather full of clichÃ©’s (“playing punk rock is nothing but a game”, and “Nothing To prove we hate the songs that we play too” are just two examples of those and then there’s them dedicating a song to their mom and dad for the love they always had. Boy, these guys ARE getting old 😉 ). But in sheer contrast to these remarks, the quality of the tracks more than makes up for what I hope is the start of beautiful things from Flatcat in the future. If only they can put some more power and momentum in their songs once again I would be a more than happy camper.

What to say of 5 Days Off then, by far my favorite Belgian band of all times. I still remember when I first laid hands on their debut split with label-mates Not That Straight, and that I instantly fell in love. A lot of blood sweat, tears and a couple of years later these guys have completely transmuted. Gone is somewhat of the chaos in their compositions, and it made way for a freshness, a maturity that will leave a lot of their contemporary compatriots hard pressed to follow in their wake.

It seems like 5DO has finally found the balance, the solution for the equations that are their compositions, which sees them totally at ease and more comfortable than ever. From the first notes of “Been There Done That” the CD grips, clenches and submerges the listener in a cascade of crisp yet somehow very down to earth and more “simple”-sounding melodic punk rock tunes than I was used of them before. 5DO has shed off their complex chaotic nature and part of their rawness somewhat which made room for a whole new sound, a whole new way of how to experience 5D0 for me personally, which makes their sound so much more accessible to the broader public in my opinion without totally “Selling Out” if there ever is such a thing. These 4 tracks still remain true to the values and identity that 5DO measured up to in the past.

As usual the stops-and-goes are aplenty, and the musical maturity of the band rises to a peak with the likes of the sudden drop of pace in between the song where Bjorn’s vocals take the upper hand and the backing vocals (something that the band obviously worked upon) are a nice surprise. Whenever I hear that chorus I get goose bumps all over. “The Message” continues in good style, as 5D0 convinces in every department. Once more I am astonished about the margin of progression a band can make within the span of records. Whereas before comparisons to Adhesive, early Randy, No Fun At All and the likes were appropriate, I am bold in daring to say that 5DO has outdone any of those bands and might well be one of the best European bands in their genre to have emerged these past few years. Finally, 5DO truly have their own thing going, and I hope they can build on this newfound identity in the future. Class A impressing stuff once again. With brilliant songs the likes of “24-7” they can’t go on unnoticed and it shows why they toured halfway across Europe and even as far as Canada in the past. These 4 tracks leave nothing to be desired, save for the fact that I pray these guys bring out another full-length soon.

Stopping just short of truly marvellous, this split CD is a testimony of the healthy vibe that is racing through tiny Belgium where it concerns Punkrockland. I can only hope the vibe gets transmitted throughout boundaries for all of your sakes!