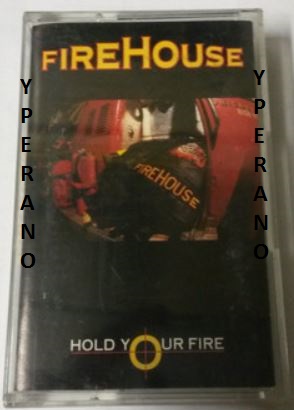 FIREHOUSE: Hold Your Fire tape Cassette 1992 Reach For The Sky, Sleeping With, When I Look Into Your Eyes. Check videos and audio

With their second album, Firehouse perfected their slick, AOR hard-rock. Its the power ballads that make Hold Your Fire a prime piece of mainstream pop-metal. The group knows how to construct this type of songs, writing sweeping choruses and developing appropriately bombastic production that make Firehouse a worthwhile listen for fans of the genre.
———————————————————-
5.0 out of 5 stars A Great Album
I like this album a great deal, and find it to be an overall stronger and more mature collection than FIREHOUSE, their debut album. It does have the great Top 10 ballad “When I look into your eyes” (These guys have always had a great touch with the ballads). Anyways, besides that hit, you’ll also find several other great songs, including the rocking opener “Reach for the Sky”, and my favorite song on the album, the “Sleeping with You”, a goofy, rocking ode to getting some action. If you’re a Firehouse fan, this is a definite must-own. As for new fans, you might want to go with the debut first, as it has most of the big hits, but FIREHOUSE, HOLD YOUR FIRE are the definite purchases for any Firehouse fan.
———————————————————-
5.0 out of 5 stars Hold Your Fire is a must-have for any Firehouse fan!!
After 20 years, this album is still getting rotation in my cd player. I love the speed of “Reach for the Sky” and its catchy rhythms. My favoirte song from this album would have to be “When I Look Into Your Eyes” and “Hold The Dream”. I like the song “Sleeping with you”. Firehouse delivered another successful album and another top five single with “When I look into your Eyes”. This is a great album and a must-have for any Firehouse fan!!!
———————————————————-
5.0 out of 5 stars Another Great Album,
Another great album by Firehouse. My favorites are Reach for the sky, When I look into your eyes, and hold your fire. I have other favorites, but there are my top 3.
———————————————————-
5.0 out of 5 stars House on fire !
The first album from the band and Hold your Fire represent some of the best music of the nineties for what concern about hair melodic metal. I prefer HYF to the first one even if I love them both! Hold your fire is better recorded than the first one, it has a little more mature songwriting and it is consistent from the beginning to its end. Bill Leverty guitar sound is exceptional a truly wall of sound when he plays rhythmn parts and a really “cutting through the mix” sound when he plays solos. I really love also CJs voice which is truly correct for the genre and really entertaining! The songs are great, great, great melodic metal and after all these years they still continue to give me fun and make me sing! These two records from Firehouse and the first two from Danger Danger are always in my cd player as the best example of an era of fantastic music, of tender power ballads and killer melodic riffs! Hair metal era!
———————————————————-
5.0 out of 5 stars one of my favorites,
I remember scrambling all over the place like a fool back in the summer of 1992, trying to find this album. I first heard “Reach For the Sky” on the radio, but didn’t know who sang it. When I did finally get “Hold Your Fire”, I loved and still love every song on it. I still like “Reach For the Sky”, but I really like the ballad “Hold The Dream” even better. I also went out and got the first Firehouse CD, but I think this is way better
———————————————————-
5.0 out of 5 stars An amazing album,
This is a truly great hard rock album, each and every song is superbly performed and the musicianship is great. Every member of this band does a superb job. CJs vocals are amazing, he has a huge range and his voice is gritty yet clear. Superb guitar and bass work give the music a really high quality feel and the drums are very good too.
There are some really great songs on this album, from rock anthems like ‘you’re too bad’ and ‘mamma didn’t raise no fool’ to ballads like ‘when I look into your eyes’. I rarely listen to ballads on most albums but the ballads on this album are first class.

This is the second classic album from an amazing rock band.
———————————————————-
5.0 out of 5 stars I JUST LOVE IT!,
I really like this album by:*FIREHOUSE*,’cause they really know how to show the world they are the best in the music industry, how they play, how they sing,the words in the songs,like… WHEN I LOOK INTO YOUR EYES,HOLD THE DREAM,SLEEPING WITH U,ETC… I just hope the best 4 them and i hope that they will do another album soon, ’cause i’m really sure that i’ll be the first to by it…So people around the world by the album FIREHOUSE , and i’m sure u won’t regret it.

You're viewing: FIREHOUSE: Hold Your Fire tape Cassette 1992 Reach For The Sky, Sleeping With, When I Look Into Your Eyes. Check videos and audio £4.00
Add to basket