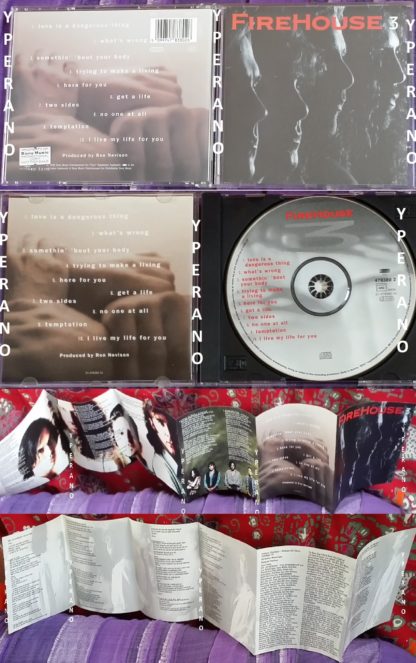 FIREHOUSE: 3 PROMO CD Great ballads, great rockers. Check videos “Here For You”, “I Live My Life For You” 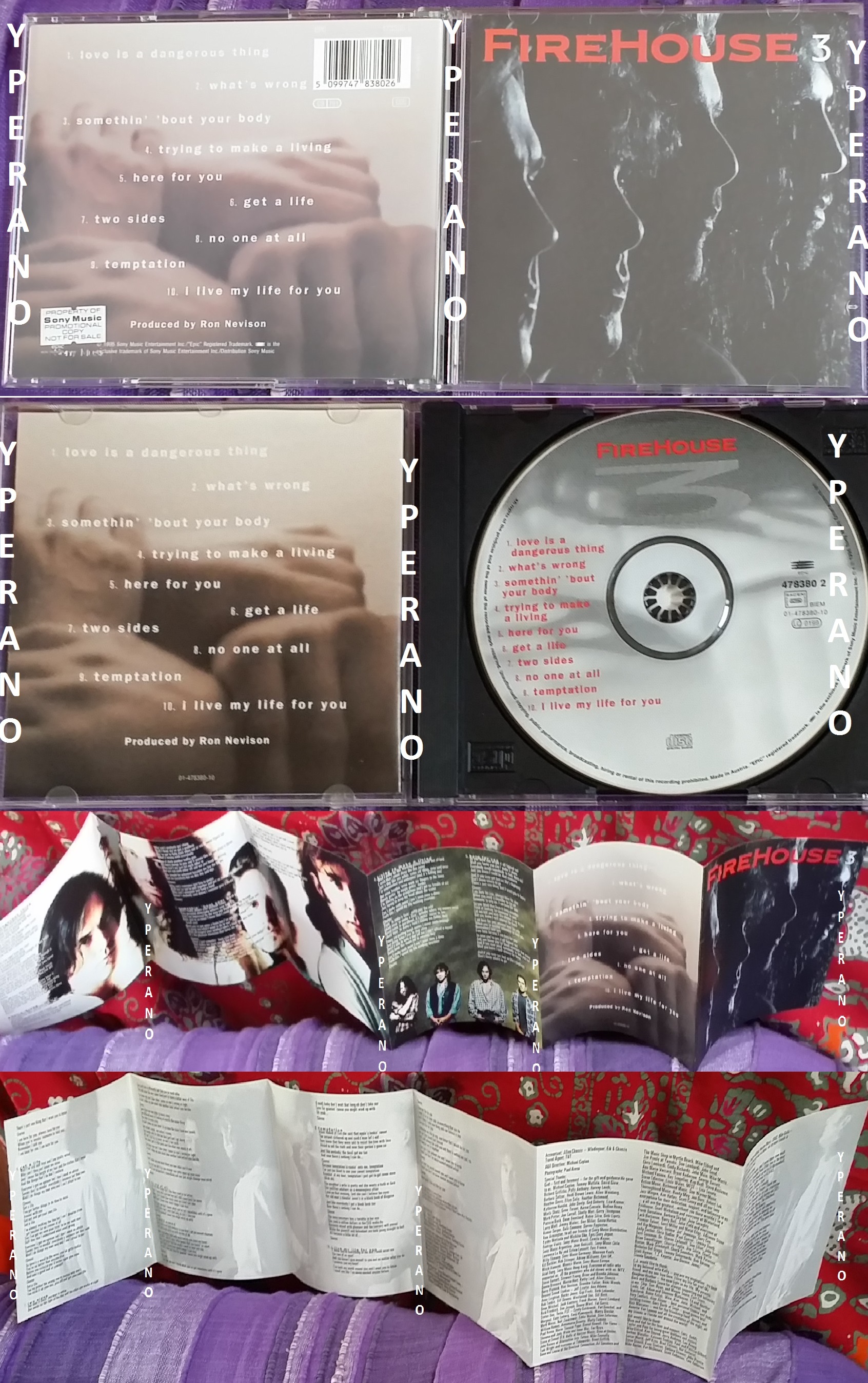 3 is the aptly titled third studio album of the rock band FireHouse. It was released in 1995.
The album featured a softer sound than their previous two albums. It also spawned another hit signature power ballad in “I Live My Life for You”.

Firehouse strip away most of their harder edges on their third album, the aptly titled Firehouse 3. Some of the songs still rock out, yet they are punctuated by the distorted guitars, not driven by them. Still, the groups strong point is their knack for power ballads. While none their ballads stray from the late-’80s formula, the group does them well — good enough to make the record a moderate hit, nearly five years after the style went out of fashion.
———————————————————-
5.0 out of 5 stars This album is extremely underrated…A very solid record!,
This album is unfairly harped upon in many of the reviews here as a weak FIREHOUSE effort. In fact, while this album is softer than HOLD YOUR FIRE, probably the bands heaviest effort, the album as a whole is more similar to their first two albums than CATAGORY 5 is. The result is an album that strikes the middle ground. “Love is a Dangerous Thing” is a strong mid-paced rocker, somewhat in the lines of a softer “Reach for the Sky”. “Here for You” and “I live my Life for You” are two of the bands best ballads. Quite simply, if you love the bands output (specifically CATAGORY 5), you should love this album. If you find either of their first two albums not heavy enough, you probably won’t like this one. But if you’re willing to respect music on its own terms, you’ll find this to be a satisfying album. I read the negative reviews here, and as a result, waited a long time before finally buying it. The result? I was very pleasantly surprised. Buy it, and you will be too.
———————————————————-
5.0 out of 5 stars The right title here is five (stars),
If you’re into hair, melodic metal, you know Firehouse was a terrific band with a flavour all their own thanks to CJ Snares very original voice and Bill Levertys wonderful riffs writing and guitar playing. They wrote really exceptional melodic metal tunes in their career and this album makes no exception. Just to name some tunes I’d say that “Love is a dangerous thing”, “Whats wrong” and “Trying to make a living” are killer songs for real! KILLERS! And “Here for you” and “I live my life for you” perfect power ballads. All in all still a wonderful album from one of the top acts in hair metal! “Hold your fire”, their second album to me is one of the greatest albums in melodic rock genre, but this one comes really close. I was perplexed when I was there to buy this one because I saw a lot of bad reviews around but I’m sorry, I don’t agree at all. I’m so glad I did buy this one on the spot (even because its not available anymore)! I own this album now and its just as good as I think an album from Firehouse should be. I don’t know if its because this album came out in a bad year for music (grunge period uh?) and I don’t know if the people is hard against this album because of the latter weaker albums but this one is still very very solid. Believe me. If you loved the first two efforts from the band you’ll love this one too. Some people talks about a change in style here, but I really can’t understand what they’re saying. They’re totally wrong. Firehouse produced here just another winner hair metal, melodic, anthemic, AOR, Arena rock masterpiece in their vein. They didn’t softer their style a bit here. The sounds are still the same, the writing still very solid and very near HYF. The continuity is complete. The title here is 3 exactly because it is the third album in a straight line. Absolutely NO style changes here. And absolutely five stars for me. In fact the right title here would be 5 not 3. Buy it if you’ll love the earliest albums from the band, you’ll love 3 too.
———————————————————-
5.0 out of 5 stars Great CD Highly Underrated!,
A lot of fans question this album and the direction the band seems to take on this one as compared to their previous releases. The bottom line is, that this is an amazing album with a tremendous mix of acoustic and electric guitar rock. The riffs are terrific and the drumming is very solid, with one song that really spotlights that instrument. The vocals are just spectacular and very strong. Overall, this album does seem to be different for this band, but it is a fresh new direction for them and showcaes their growth and diversity in musical style. I Love it and strongly recommend it. If you really love great melodic rock, you will not be disappointed with this album.
———————————————————-
5.0 out of 5 stars MAN THAT ROCKS !,
Let me tell you : if you’re looking for a rock album with a funky groove and some high class ballads, search no more ! You’ve found it. So maybe ‘Hold Your Fire’ wasn’t quite what it should have been ; this most definitely is ! Also check out their self-titled debut. And get knocked off your feet, of course. Firehouse is classy melodic rock all over.
———————————————————-
5.0 out of 5 stars Pretty Solid,
Ladies and Gentlemen, we have another super solid album. I have given it a listen many times. One of my favorite songs is called: “Here For You”. See, that’s a ballad. Except, this isn’t just your average I love you, blah blah. This is an adult ballad. I’m trying to send that message to someone, if you understand what I am interpreting. I’m not really sure what to say here.

Be the first to review “FIREHOUSE: 3 PROMO CD Great ballads, great rockers. Check videos “Here For You”, “I Live My Life For You”” Cancel reply 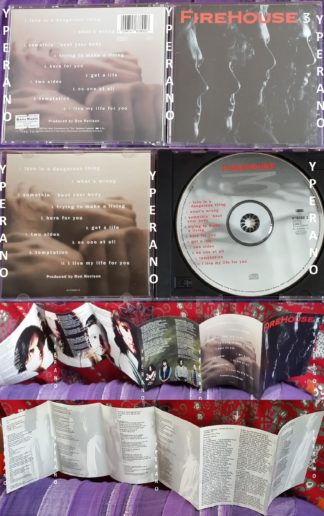 You're viewing: FIREHOUSE: 3 PROMO CD Great ballads, great rockers. Check videos “Here For You”, “I Live My Life For You” £8.00
Add to basket