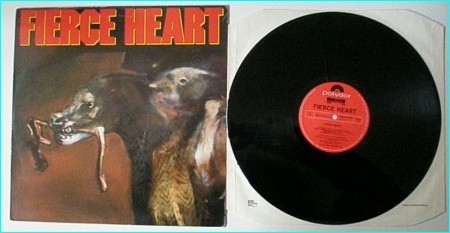 CLASSIC MID-80s AOR / MELODIC HARD ROCK that IS CONSIDERED as ONE OF THE BEST MELODIC HARD ROCK / AOR RELEASES OF THE 80s AND IT NOT HARD TO SEE WHY. MASSIVE HOOKS , POWERFUL VOCALS FROM LARRY ELKINS AND SMOKIN AXEWORK BY REX CARROLL WHO WOULD GO ON TO FORM WHITECROSS. ABSOLUTELY ESSENTIAL! CONTAINS 9 SONGS!

Rex Carroll is a Christian metal guitarist and was well known for his work in the band Whitecross. Rex Carroll has also been a part of other famous bands like Fierce Heart, King James and The Rex Carroll Band. He not only appeared as the lead guitarist but also served as songwriter and producer for six U.S. and world tours. His band, Whitecross, won two Dove Awards for “”Hard Music Album of the Year”” in 1990 and 1992.

Chicago FIERCE HEART was a melodic Rock project put together by Mirage Records’ Jim Delehart and band manager John Doumanian.
The band manager had discovered Elkins in Nashville and then heard tales of the guitar prowess possessed by Carroll. He played the duo demos to Delehart who quickly envisioned introducing the musicians and recording an album with them.
Carroll had previously recorded with WINTER HAWK, whilst Elkins was an in demand session player in his native Nashville recording everything from Rock operas to TV and radio commercials. The album, simply titled ‘Fierce Heart’, utilized engineer Chris Lord-Alge in a percussive capacity due to the original drummer leaving the project prior to the recording of the band album, release in 1984 for Mirage Records. To promote the record FIERCE HEART performed concerts but then dissolved, Elkins allowing Carroll to retain the name. That album was eventually sold to Polygram.