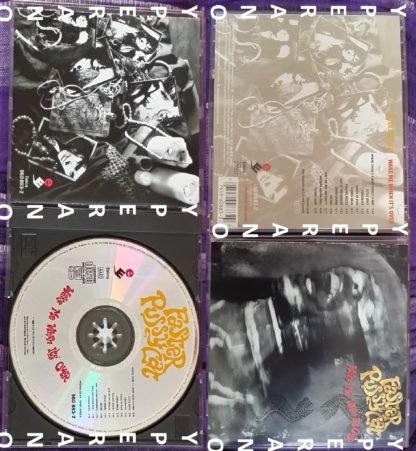 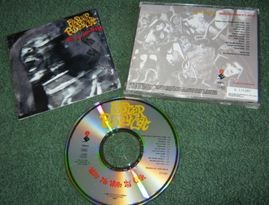 Wake Me When Its Over is Faster Pussycats second album, moving from the hair metal sound of their first album to a blues-influenced sound.
After the recording of this album, drummer Mark Michals was fired because of heroin possession and drummer Frankie Banali was hired for a concert tour. Banali was replaced after the tour by Brett Bradshaw.
Music videos were produced for “Poison Ivy” and “House of Pain”. “House of Pain” reached #28 in the Billboard Hot 100 and the video, which was directed by future film director Michael Bay, was in rotation on MTV. The album itself peaked at #48 in the Billboard 200.
The same triumvirate of influences as before dominate this album — Mötley Crüe, Aerosmith, Guns N’ Roses — and the band scored its first hit with the power ballad “House of Pain.”
SONGS:
“Where Theres a Whip, Theres a Way” (Taime Downe, Brent Muscat, Greg Steele) 6:44
“Little Dove” (Downe, Muscat) 5:05
“Poison Ivy” (Downe, Eric Stacey) 4:24

5.0 out of 5 stars Purrr fection.,
Faster Pussycat annoyingly never became as big as they should have been and this album is prove of why they should have been massive. With their trademark hook hungry lyrics and sleazy guitars poured all over this second outing is a positive progression for them from their self titled debut. Which was, in its own right a very hard act to follow and in my eyes a true classic of the genre. More personal in terms of heartfelt ballads like House Of Pain and Please Dear, successfully showing a different side to the party band sound of the band. They then shake things up again with the likes of party rockers Poison Ivy, Ain’t No Way Around It, and the truly addictive Slip Of The Tongue. Overall, this collection of tracks has no weak link to carry in the same way the debut sounded so simply contagious and exciting. Never the weakest link of the L.A. scene this is a must have for those who like their rock music sleazy, addictive, clever, and purrr fect…
===========================================
5.0 out of 5 stars
love it its so brilliant it will amaze you i’m in to faster pussycat in a big way tamie downe keep up the good work
=========================================
5.0 out of 5 stars An excellent second album,
A more mature sounding record than their debut with songs concerning divorce (‘House of Pain’), murder (‘Cryin’ Shame’) and abortion (‘Pullin’ Weeds’) but their sleazy sound is still evident, especially in the opening track. A superb album which could probably have done without the inclusion of the ballad ‘Please Dear’ as a bonus track – Taime Downes voice just does not sound right for this song.

Wake Me When It’s Over is the often forgotten Faster Pussycat release in comparison to it’s predecessor self titled album ‘Faster Pussycat’ as far as the history books are concerned. But it was more commercial successful achieving US Gold status quickly and with the single House of Pain receiving heavy rotation and hitting the charts at 28 and clinching the bands first hit.

It looked as if Faster Pussycat were on the verge of a break through commercially and were certainly in the reach of it. But this album was the beginning of the end as things were brewing in Seattle with the surge of Grunge and the Punk revival only a few years away from dominating. Leaving much of the Glam and Hard Rock bands coughing and spluttering for survival until the scene died completely.

Faster Pussycat are often written off and disregarded by many and this album totally defeats their argument. It proves this band were capable of releasing an album with Hard Rock riffs drenched in blues with swagger and Punk Attitude. This album simply pummels the ‘Faster Pussycat’ debut album into the ground. The first album was buried as Guns N Roses released ‘Appetite for Destruction’ and Motley Crue with ‘Girls,Girls,Girls stole the show. Along a long list of strong and high selling albums of the time that were dominating MTV and radio.

Unfortunately Wake Me When It’s Over meets the same fate as their first album back in 1987. As Moltey Crue released the career highlight Dr. Feelgood and Aerosmith with ‘Pump’. But this album is an improvement from their debut and has better construction of songs including arrangements, textures and the noteworthy production.

It’s strength is in the songs themselves with House of Pain, Crying Shame, Poison Ivy, Gonna Walk, Tattoo. This album is simply the best release Faster Pussycat ever made. I mean listen to Ain’t No Way Around It and tell me it doesn’t rock the house down. Arizona Indian Doll reminds me of St. John by Aerosmith but the albums overall is highly addictive.

It is the only Faster Pussycat album that to me is the most consistent and with the highest standard of material that makes this a must buy for anyone looking back on the healthy time of Hard Rock and when it ruled the roost. It simply proves that Faster Pussycat made a record that was on a new improved level and a league above.

It looked like Faster Pussycat were on the way to becoming a decent contender but Wake Me When It’s Over was the end of the bands short lived success with only a few years away from dissolving falling victim to the diluted Glam/Hard Rock scene and Nirvana with the Grunge movement battering it’s way into the mainstream and taking Warrant, Ratt, White Lion, Poison, Kix, L.A. Guns and a large percentage of bands alike out of the picture.

But in reflection Faster Pussycat managed to make a record that some bands never achieved in terms of content and substance and went out swinging. 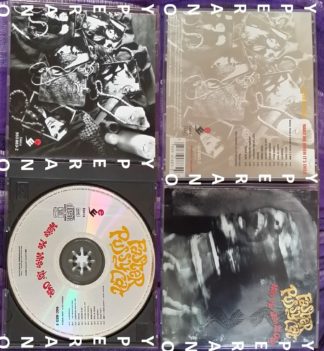