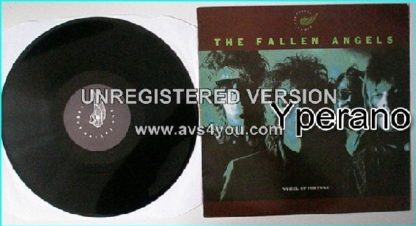 Side project of Hanoi Rocks and The Vibrators

———————————————————
The 3rd Fallen Angels album Wheel Of Fortune was never reissued on CD. The Fallen Angels was formed in 1984 with Knox from the Vibrators on vocals and guitar, with the Hanoi Rocks rhythm section of Sam Yaffa on bass, the late Razzle on drums, and Nasty Suicide on rhythm and some lead guitar. Also guesting on the first album were Cosmic Ted and the Psychedelic Kid, (Mike Monroe and Andy McCoy respectively).

The first release was the single “Amphetamine Blue” followed by the album “FALLEN ANGELS”. Two more albums were recorded, this time for Jungle, Fallouts sister label. The third (and last album) was called “WHEEL OF FORTUNE” (1989) and also had Nasty Suicide guesting on guitar. It too was a fairly introspective pop album. The band played a few more gigs including two festivals in Greece, and ended up as a three-piece before calling it a day as there didn’t seem to be enough interest in the band.

Be the first to review “FALLEN ANGELS: Wheel Of Fortune LP Nasty Suicide from Hanoi Rocks on guitar” Cancel reply 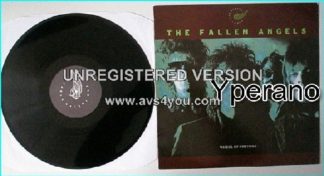