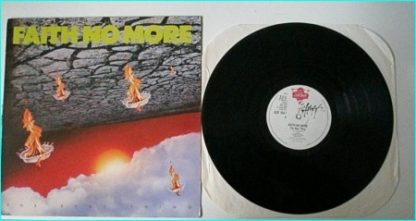 The Real Thing is the third studio album by American rock quintet Faith No More, first released through Slash Records on June 20, 1989. It was the first release by the band not to feature vocalist Chuck Mosley; instead the album featured Mike Patton from the experimental rock band Mr. Bungle. On this album, Faith No More advanced their sound range combining heavy metal, progressive metal, hip hop, funk, jazz, and soul.

The first single to be released from the album was “From Out of Nowhere” in August 30, 1989 which made number twenty-three on the UK Singles Chart. This was followed by “Epic” on January 30, 1990 the music video for which received extensive airplay on MTV throughout the year, despite provoking anger from animal rights activists for a slow motion shot of a fish flopping out of water. “Falling to Pieces”:

then saw release on July 2, 1990 and made it to number ninety-two on the Billboard Hot 100 before the reissue of “Epic” which then provided the bands first number one hit single, on the ARIA Charts,and their only top ten single on the Billboard Hot 100, making it to number nine. “Surprise! You’re Dead!” had a music video produced for it, that was directed by bassist Billy Gould featuring footage shot in Chile during a South American tour in 1990, but never saw release as an official single and the video wasn’t released until its appearance on Video Croissant. The Real Thing was one of Faith No More most successful albums to date. It is now considered a classic metal album by fans and critics alike. Although released in mid 1989, The Real Thing didn’t enter the Billboard 200 until February 1990, after the release of the second single from the album, “Epic”. The album eventually peaked at number eleven on the chart in October 1990, following the reissue of “Epic” almost a year and half after the initial release of the album. It was eventually certified platinum in America and Canada as well as being certified Silver in the United Kingdom.