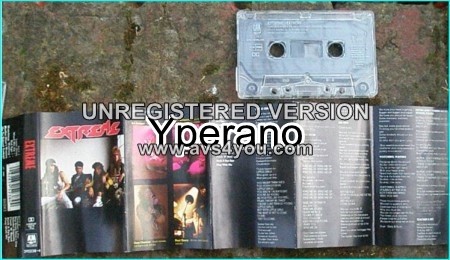 Extreme debut album is sometimes uneven but always fun. Van Halen influences are prominent, which is ironic given singer Gary Cherone post-Extreme career. This album, like all of Extreme work, is notable for Nuno Bettancourt guitar playing, but the songs aren’t bad either, mostly examining childhood from a playful but oddly mature perspective. “”Kid Ego,”” their first single, is here, as well as “”Mutha (Don’t Want to Go to School Today),”” “”Little Girls,”” “”Big Boys Don’t Cry,”” and the rock-out finale “”Play with Me.”” There are a few ballads as well: “”Watching, Waiting”” is particularly poignant and surprisingly spiritual in content. This album showed Extreme considerable potential, which peaked with their second album, Pornograffitti. –Genevieve Williams

When Extreme first burst on the scene in 1989, glam/pop metal was all the rage, and while the band was better musicallyequipped than many of the other bands of the day, Extreme tried to blend into the then-hip musical climate with their self-titled debut.
Besides trying to fit in visually (justtake a look at the album cover), the quartet rely on Van Halen-esque party anthems to get their point across. The album did spawn a few songs that would find mild success on MTV “”Headbanger Ball”” program (the hard-edged pop rockers “”Kid Ego”” and “”Mutha””), but Extreme would have to wait for their next release, 1990 PORNOGRAFFITI, to obtain their commercial breakthrough.

5.0 out of 5 stars COME PLAY WITH THIS!!!,
i feel that this is really for hardcore fans of extreme, and wish to expand their appreciation of the band style. their style? different at some points, especially with mutha(dont wanna go to school today), but that has one helluvan intro.
lets rate some stuff; i like lookin at the “”not as good as”” points, and then the REALLY good ones:
Little Girls: Fantastic intro to an album, kicks off the wierdness often expierienced with start of extreme albums (Decad. Dance, Warheads, something I’ve forgotten) and no exception, with a harmonica might i say! (played by something Raphael) the only extreme song to ever incorporate such an instrument… and nuno solo is fantabulous (pete townhsend should steer clear of this one if he doesnt want any more trouble…)
Wind Me Up: classic cockrock song with an amazin rythym to it (still cannae find the tab…)
Kid Ego: great song with a wakey-uppy intro, one of their hits which stars in the best of extreme. fantastic again, “”steppin on the little people
Watching, Waiting: EXTREMly poignant song, which makes even the biggest of boys cry, i just dont know where this came from, or what inspired Gary and Nuno to write this, truly amazing stuff, great duet…
Mutha: two words; delicious intro
Teacher Pet: i like this, the intro helped me to learn squealing p.harmonics with palm muting, another story, this shows nuno tremendous capability, if you haven’t already noticed it by now…
Big Boys Dont Cry: strange song, ace, but strange…
Smoke Signals: oh my god, this is as funky as it gets with this accoustic guitar intro; i’v never heard someone make it sound like that before, so funked up. i love it.
Flesh And Blood: this is great, really catchy, sticks in your head, and feels good there. you’ll hear the cheesiness of the eighties i was explainin before, the salp bass bits are funky, (after the solo)
Rock a Bye Bye: wierd, orchestral, guitar solo-ey thing. nice though; this manages to put me to sleep, not in a boring sense…
Play With Me: this is spectacular, double time from any of the other songs, the guitar solo blows me away, it packs the tightness of this band playing into a whole 3mins whatevasecs, it really does rule…
well summing up, a two-very enthusiastic- thumbs up. couple of things; this band were given the “”best welcome”” at freddie mercury tribute (buy that too!), they still have the record for rock accoustic number with more than words, and nuno made his own guitar for this album. impressive how tight this band playing is, on any other rock album you can make out little mistakes, missed beats, flat notes, out of key singing etc, you wont find that with extreme…buy this album, you just might love it…why are you still here?

5.0 out of 5 stars No word can describe how great this band is!,
The beginning of the legendary / unrecognised band. Popular in America but justy by asking around i’ve found very little people have came across them, even though they’ve definatly heard their hit ‘More than words’ near enough once a month.

This album is nothiing soft like more than words, however don’t be put off, it not heavy metal, head bashing stuff either.

The best way i can describe their music apart from being funky is – imagine Queen only they have an American background instead.

My recommendations is to buy all their albums because each is different to the other. Waiting for the punchline however i wouldn’t force upon anyone as some tracks are badly recorded in my opinion.

For this album however, i downloaded it via MP3, all top quality and if your 30+ i guarantee they’ll bring back that 80 feeling.

I’m biased as i enjoy every song made by Extreme, but i few recommendations for this album i would advise you listening to:

If you like Queen you’ll like these guys much better. Im not going to persuade you to buy this album but all i can say is, you only live once and to miss out on this for a few quid your certainly going to have a dull life ahead of you!

Many thanks to Nuno licks and Garys wonderful voice, look forward to seeing you return to the UK, and welcome back. “ 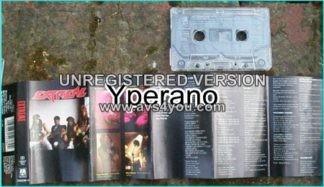