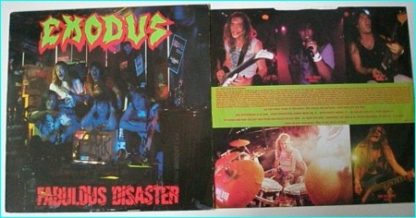 Fabulous Disaster is the third album by Exodus, released in 1989 M.F.N Records
A video was made for the song “”The Toxic Waltz”” which received a good amount of air-play on MTV Headbanger Ball.
This is Tom Hunting last album with Exodus until the 1997 live release “”Another Lesson in Violence.””