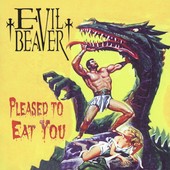 This is sort of garage Metal / punk. Sort of like L 7. The vocals are very strong female vocals and the music is quite catchy. This band is good for what they do.
Basically a punk metal version of the sex-freak outlook of Nashville Pussy, or maybe the new-millennium version of the gleeful horniness of the Pandoras, Evil Beaver (a two-woman duo, natch) makes a point of emphasising the musical side of the equation over the more attention-grabbing lyrical concerns on its second full-length. The more melodic and garage-y Pleased to Eat You (in comparison to the debut CD Lick It!),doesn’t skimp on the cheerful raunch — songs include the plainspoken title track, “”You Suck! Sucker,”” and, erm, “”Ass Salad”” — but Dave Trumfio’s production brings out new dynamic range in Evie Evil’s bass playing and new precision and clarity in L.A. Beaver’s drums, making it a huge improvement over the muddy, monochromatic debut. The songwriting is several notches higher as well, with the almost pretty “”Sonny Side Up”” and the Stooges-like “”The Nutcracker”” particular highlights. Stewart Mason.

“”Lick It”” and “”Pleased To Eat You”” shall forever remain in the bowels of the underground music monster. Lucky are those who have it regurgitated upon them for they will behold what was the awesomeness of one of the universe’s most powerful forces: Evil Beaver. Just as blood curdling and brain aching as it’s predecessor, “”Pleased To Eat You”” lures you in from the onset with “”Forbidden Fruit””, “”Pot Pi”” swallows you whole, and the rest of the album will have you submerged in it’s digestive track with “”Ass Salad”” as the only glimmer of hope that you may escape the bile of this wretched beast. But you won’t want to escape because you love it.
Beauty through audio bludgeoning.
———————————————————————————————–
Colossal – a modern classic
Evie and Laura put a lot of work into this album, and it shows. The production breathes more, a few fancy effects are used (like a drum loop in one track) and all the songs are excellent. “”The Nutcracker”” pounds so hard it reminds me of the great earlier material from the Melvins. Evie’s voice add’s a different dimension to this band, though, and they’re not a one-trick pony. The songs rock really hard or just pound, or sometimes pull back for effect, poising gracefully before plunging into the next chasm of distortion. Evie’s vocals are always evocative and pleasant to listen to – she has a great voice and can express herself quietly or scream with the best of them, whatever the mood of the song calls for. Most of these songs are about relationships, whether blatantly sexual or vaguely emotional. The arrangements are killer, and the songs roll and flow through different parts rather than drive one single riff into the ground (a pitfall of many ‘heavy’ bands). LA Beaver is an imaginative and sometimes graceful drummer who can shuffle or bash whenever needed.
———————————————————————————————–
The gentle sexual humor of the duo amused me greatly as I first listened to them, distracting me from the fact that THEY ARE A DUO! Just bass & drums – no power guitar – and this has such a savage beat I did not notice that at first !! I can not guarantee you will like it – but it is enough off the beaten track that you owe it to yourself to listen and decide for your self. And as to the not-so-subtle innuendo – or what I would call “”guy humor”” – that is pretty enjoyable for itself.
———————————————————————————————–
Greatest CD ever never heard
I got this CD from a friend that saw this band live. All I have to say is…..WOW.
With all the bad music on the radio i can not understand WHY this band is not sitting in the #1 spot on the rock stations.
I can only explain it as “”new classic rock”” even though it is a fresh NEW sound. You will understand when you hear it.
You WILL hear of this band one day.
an AMAZING listen.
Buy it.