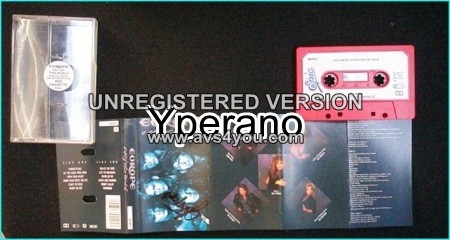 Out of This World is the fourth studio album by the Swedish rock band Europe. Released on 9 August 1988 through Epic Records, the album was a huge commercial success selling over 1 million units in the United States alone, peaking at number 19 on the US Billboard 200 chart and reaching high positions in charts worldwide. It was recorded at Olympic Studios, London, England.
Six singles were released from the album: “Superstitious”, “Open Your Heart”, “Let the Good Times Rock”, “More Than Meets the Eye”, “Sign of the Times” and “Tomorrow”

Songs:
“”Superstitious”” was the first song on the album, written by Joey Tempest. It was the first single released from the album and is arguably one of Europe most recognizable and popular songs. The song peaked at number 9 on the Billboard Mainstream Rock Tracks chart and peaked at number 31 on the Billboard Hot 100. The song reached number 35 on the Canadian Singles Chart. The song was released in Australia, Europe and New Zealand in July 1988. “”Superstitious”” reached the UK top forty at 34. “”Superstitious”” continued the trend of lower-charting singles when it charted. The song reached number one in Norway and their homeland Sweden.
“”Open Your Heart”” and “”Let the Good Times Rock”” would become minor hits in the UK with “”Open Your Heart”” charting at 86 and “”Let the Good Times Rock”” peaking at 85. Three more singles would be released, yet none of them charted. “”Tomorrow”” was the last of the six, and was only released in Brazil.

Release and Reception:
Out of This World was the band follow up album to the successful album The Final Countdown. Upon its release in August 1988, Out of This World peaked at #19 on the Billboard 200 album chart.[2] The album did not match its predecessor. The album is Europe best-selling album in Switzerland. Out of This World achieved Platinum status in the United States, gold platinum status in Canada, and Switzerland.
Allmusic gave Out of This World three out of five stars. Reviewer Andy Hinds said, “”Europe produces made-to-order lite metal with admirable craftsmanship and occasionally memorable hooks. “”Superstitious”” even has a disarming gospel quality. This is hard rock with all the edges sanded off. Capable lead singer Joey Tempest carries the tunes with non-threatening panache, while Kee Marcello (who proved his virtuosity on Europe previous by performing “”Flight of the Bumblebee””) provides plenty of nice guitar solos.””
Out of This World included the hit singles “”Superstitious””, “”Open Your Heart”” and “”Let the Good Times Rock””, all of which had accompanying music videos. Only “”Superstitious”” charted in America. “”Open Your Heart”” and “”Let the Good Times Rock”” charted in the UK. The other singles, “”More Than Meets the Eye””, “”Sign of the Times”” and “”Tomorrow””, didn’t chart. “”Tomorrow”” was released in Brazil only. “”Superstitious”” was the most successful song from Out of This World on the rock charts, reaching number thirty one on the Billboard Hot 100 and number nine on the Mainstream Rock Tracks. “”Superstitious”” was released in the fall of 1988 and became arguably the band most recognizable song from the album. Its music video received heavy airplay on music television.

Out of This World Tour:
Prior to the release of the album, in the summer of 1988, the band travelled the U.S. together with Def Leppard. However, the band management considered a promotional tour of Europe (the continent) more important and made the band withdraw from the highly successful American tour. After the promotional tour was over, the band set on rehearsing for the upcoming Out Of This World Tour, which began with a bombastic show (60,000 visitors) in Mumbai, India in November 1988. Then the band flew to Japan (where they filmed the video to “”Let The Good Times Rock””). The scheduled tour of Australia was, however, unexpectedly cancelled. From January to April 1989, the band toured all over Europe. In some places, in Germany particularly, the band did not manage to fill up the arenas and concert halls like they had done during the Final Countdown Tour, despite more and more good reviews from the musical press. In May 1989 the band was supposed to go over to the USA again. But the album sales were not as high as had been expected. So in the end, there was no U.S. tour and the only concert the band played in the summer of 1989 was the legendary festival in Milton Keynes (UK). After that, the band decided to move to Los Angeles and compose new songs for the next album.

5.0 out of 5 stars Best Europe album ever!
Europe are such an underrated band. Ask most people and it’ll be “”Oh the band that did The Final Countdown””. Whilst that are free to enjoy that song, i’ll be here listening to the material that people don’t give a chance to. Passed off as just another hair metal band, they are much more than that.

The first thing I noticed about this album is Kee Marcello guitar tone. It is Godly, just listen to the intro to ‘Let the Good Times Rock’. Of course this is nothing without his very capable skills which really shine through on many of the songs. Joey Tempest sings as good as ever and the rest of the band perform as you might expect.

I enjoy all of this album, but the main standouts for me are uperstitious’, ‘More Than Meets the Eye’, ‘Ready Or Not’ and ign Of the Times’. All the tracks here are awesome though, including the re-recorded ‘Open Your Heart’.

Overall, an excellent album, full of top notch songwriting and performances, the guitar solos are particularly excellent. If you enjoy ‘The Final Countdown’ then you’ll enjoy this. It definetely Europe best effort. Expanding on what they learnt on ‘The Final Countdown’ and better than the next release ‘Prisoners In Paradies’ – which sounds very similar to a certain band from New Jersey, USA.

5.0 out of 5 stars Europe Fourth Album!
“”Out Of This World”” is one of the best albums Europe has ever released in their amazing career which now spans three decades. All of the songs on this CD should have been huge international hits as all have something to offer the listener. My favorite tracks here are “”Sign Of The Times””, the beautiful “”Tomorrow””, the awesome “”Superstitious”” and the classic rocker, “”Ready Or Not””.
Do not let this release pass you by and you’ll be missing out on a real Europe masterpiece.