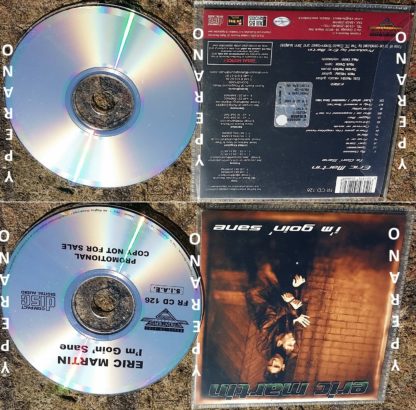 5.0 out of 5 stars Spanning the genres…,
This album is a masterpiece. Eric Martin has dared to expand his musical scope, and the result is a hard-rocking, and frequently breathtaking collection of songs. Personally, I would tag this album as the most definitive release of Mr. Martins career. It encompasses his work with Mr. Big, his previous solo efforts, yet also ventures into new territories. Prepare yourselves for a lengthy review folks. 🙂
I think it goes without saying that Eric is in top form here. He effortlessly handles each track, from soul-injected numbers like Bigger Man to the metal-tinged opening cut (My Disease). However, just as impressive is the band backing him. Each members performance assisted in making this record strong, consistent and instantly memorable.

I also wanted to touch on the songwriting briefly. I’ve always found Eric Martin/Andre Pessis-penned songs to be among the best on any of Mr. Bigs releases, and this duo has proven that they haven’t lost their magic. I vehemently disagree with the other reviewer of this CD regarding the lyrical content on “GS.” I also think the oftentimes bland and passionless ditties by Dianne Warren are best left to Air Supply and Chicago (great bands that have given up on expanding their careers)… just my two cents.

– My Disease: This seems to be the undisputed favorite of many reviewers. The tracks groove is infectious, and the overall “feel” of the track is heavy. In fact, its one of the heaviest Eric has ever recorded. Personally, I love the bass tone and drum fills, which stand out particularly during the musical interlude that segues the bridge. Though crunchy and almost nu-metalesque at times, it retains its’ melodic nature. A fantastic way to start this album!
– Spaceman: “Chock-full” of hooks. This song is the perfect selection to transition the listener into slightly mellower material (as My Disease is unarguably the heaviest track), though it still rocks! It touches on the viewpoint of wanting to escape. Don’t we all just want to get away sometimes? “You’re my rocket out of here!”
– Goin’ Sane: I can’t say enough about this song to do it justice! It is the title track and has a very catchy chorus and is instantaneously likable!
– Free of It: This song had to grow on me, but I highly recommend giving it a chance if its not your favorite right away. A drum loop is interwoven with live drumming, which adds a fresh and different sound to the track. I also liked the “rap” part of the song. I’ll admit that I cringed when I read “(rap)” in the booklet, but it is actually my fav. part of the song.
– Marie: Punk-influenced and very head-bobbable! Denise owns this song! It is full of energy and unrelenting. Love it, love it!!
– There Goes the Neighborhood: Creative and at times quirky lyrics, laced with a gentle poke at blue collar, trailer-dwelling types. Its kind of a modern-day Beverly Hillbillys story, and an enjoyable, medium-paced number.
– Carnival of Souls: This song is hard-rocking and has Eric screaming wildly at the closing of the guitar solo. Great fretwork coupled with some very in-your-face vocals. Nice.

– Untouchable: Radio-friendly and riff-laden. I believe this song is another standout, and quite fun to blast in the car. Its sing-along quality and driving beat will cause you to miss exit signs and get speeding tickets though, so play with caution.
– Bigger Man: Eric always hits his mark on ballads, and this one is no exception. It is the first introduction to the softer side of the new incarnation of the Eric Martin Band, and hits the high standards set by the previous tracks. It is R&B-flavored and features some excellent back-up vocals, and is almost reminiscent of Hall & Oates in style. The message here is that the narrator isn’t able to look past “everything thats wrong with us,” and suggests his lady love needs a “bigger man.”
– Who Am I Supposed to Be?: Every time I hear this song I find myself playing air guitar and trying to sing along. I say “trying” because Erics voice is perfect here, and in his higher range. It doesn’t get it much better than this ladies and gentlemen.
– Everyday: I’m going to quote Eric here; “the quintessential love song.” The message is great. People frequently take for granted that their loved ones know how they feel. Everybody call someone now and let them know how you love them; this song will make you want to do it! … really beautiful piano too, courtesy of Mr. Paul Dorr.
– Fly: There are many times where bonus tracks are disappointing, but this is not the case here! In fact, this song should be included on all releases, both domestic and abroad. Its another great song to speed to, and would be perfect for the soundtrack of a millennium-era “Top Gun” flick. Definitely!
– In Case You Didn’t Know: Let me intro one of the aforementioned “additional players;” say hello to Mr. James Fisher. His guitar playing is phenomenal and unparalleled on this touching ballad about someone not wanting to release the memories from a previous relationship. This song is very poignant for me. I also think its one of the best offerings on this disc.

If you enjoy Eric Martins previous work (solo or with Mr. Big), and are able to get into different genres of music, you will be pleased and impressed by this record. “Goin’ Sane” fits easily into the present ever-changing musical climate, and would be a fine addition (highlight) to anyones cd collection.

5.0 out of 5 stars A MUST HAVE
A MUST HAVE CD IF YOU DON’T OWN IT BUY IT NOW INCLUDES 13 TRACKS FROM MR. BIG SINGER ERIC MARTIN.

5.0 out of 5 stars True Talent!
An amazing album by the truly talented Eric Martin. Each and every song on here is great. My favorites would have to be There Goes the Neighborhood, Goin Sane, Free of It and Bigger Man.

5.0 out of 5 stars Eric Martin Does it again
I’m Going Sane is another great album from one of rocks best vocalists. If you like Mr.Big you will enjoy this album. Plenty of soul and attitude he just gets better and better.

I’M GONNA MAKE A WISH, BLOW THE CANDLES OUT
GIVE MYSELF THE SLIP, SMILE AND TAKE A BOW
WEAR A STUPID GRIN LIKE THE REST OF THEM
I’M GOING SANE

I’M GONNA MAKE A WISH, BLOW THE CANDLES OUT
GIVE MYSELF THE SLIP, SMILE AND TAKE A BOW
WEAR A STUPID GRIN LIKE THE REST OF THEM
I’M GOING SANE
GONNA MAKE A JOKE OF THE MAN I USED TO BE
GONNA DRINK A TOAST TO THE TWISTED PART OF ME
GONNA SAY GOODBYE YOU KNOW I WILL NEVER BE THE SAME
I’M GOING SANE 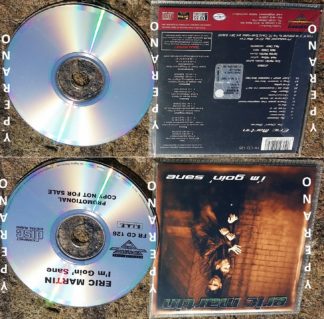