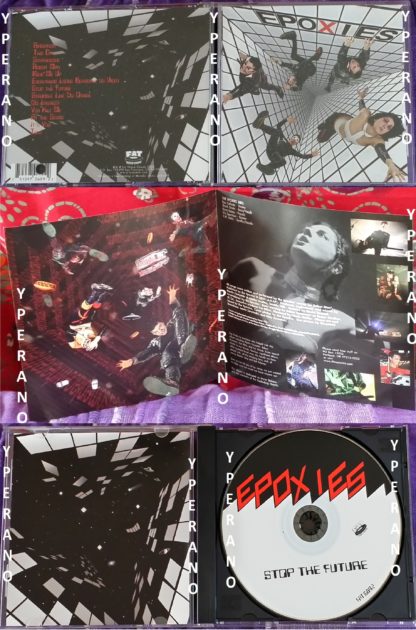 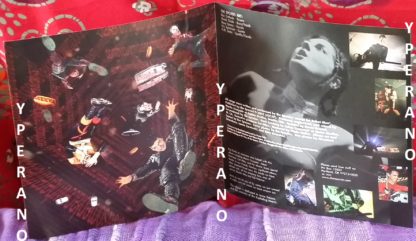 So much better than the original. And I’m a pretty big Scorpions fan.

In the year 2000, The Epoxies burst savagely forth. Clad in the very refuse that surrounded, and, some would say, defined them. This band of castaway mutants arose to renew the once-great music scene of the Northwest of the U.S.A. Their self-titled debut full length, which went on to sell 20,000 copies. Much of the success could be attributed to their hyperstimulating live show and furious tour schedule.
Accustomed to roaming the wastes, The Epoxies took easily to life on the road. Scavenging ceaselessly across the U.S. In addition to their own endless touring The Epoxies have done time with Anti-Flag and Strike Anywhere on the Rock Against Bush Tour and toured Europe with NOFX.
Much has been accomplished in the short years since The Epoxies began, but much remains to be done. Who dares predict the devastating consequences of The Epoxies first Fat Wreck full length, the forebodingly titled: Stop The Future.
But what of the music?
The Epoxies possess both the stylized veneer of new wave and the edgy sneer of early punk. They are however, by no means a time capsule. This band is fierce, refreshing, and unlike the slew of other new wave revivalists and punk rock throwbacks that are beginning to surface. They incorporate synthesized laser whines, automaton yodeling, buzzsaw guitars, and an aggressive beat into a sound entirely their own. 5.0 out of 5 stars Vaseline & Razorblades,
What can you say about the Epoxies? They do enjoy a good gimmick: 80s pleather via Gary Numans schtick and the novelty of psuedonymity. But this group is more than the sum of its parts.

Singer Roxy Epoxy has a voice that melds the edginess of a young Siouxsie Sioux with the radio savvy of Chrissy Hyde (and that’s not a bad summation of the group aesthetic). While keyboardist F.M. Static owes a debt to The Cars, hes not afraid the pepper every song with a complimenting swell, sassy intro (“You Kill Me”), or the new wave equivalent of an avant-garde piano trill/solo (“Robot Man”). The guitar chords that Viz Spectrum puts together are not complex but create hysterical sonic walls in “Wind Me Up,” the jailguitardoors-esque “Struggle like no other,” and “Toys” (romping closer that is probably the albums best). And for fear of seeming to neglect the rhythm section I will say that the punch of the drums create a foundation that is sorely lacking in most other punk or hipster bands. I mean, we all know how bored The Strokes are when they play and how formulaic every SoCal band is. All I’m saying is “Synthesized” and “Everything looks beautiful on video” generate more power than Hoover Dam.

Stop the Future isn’t a novelty album from a novelty band; its a statement. Like The Soviettes and The Faint, The Epoxies are creating a sound that respects the tradition it came out of but isn’t beholden to it. Here’s a band that sounds like itself and will I believe keep pushing itself. The energy in each track just won’t let them do otherwise.
—————————————————————
5.0 out of 5 stars Epoxies Bring Back Real Rock and Roll,
I am having so much fun these days rediscovering my R&R roots. The Epoxies are a big part of that. I grew up in the 50s with Chuck Berry, Jerry Lee Lewis, Little Richard, the Wailers, and the Kingsmen. We danced like crazy every Friday and Saturday night. In the 60s I loved both the Beatles, Stones, and many others and found the Delta Blues. I hated the 70s with the Disco Beat until the punks launched with the Pistols — especially the Clash. The Clash have always been my benchmark for a great band with a real message. I loved the dub reggae of Scratch Perry .. so beautiful. I listened to classical, Jazz, and the blues in the 80s and 90s and missed a lot of great music.

After the 2004 election I was so pissed off that I dusted off my punk record collection and got back into gear and discovered some great punk I missed including Gang of Four, Wire, and the great Fugazi. I saw Gang of Four, Bloc Party, Dick Dale, the Thermals, and Shellac this year in Portland. (A reviewer said that Portland is a bombed-out city — that is really funny. We have twenty venues a weekend and many of the leading bands in the US here).

I saw the Epoxies last Saturday night and was smiling the entire show. They are just beautiful and so much fun. I get great positive energy from everybody in the band — especially Roxy. Roxy expresses a big heart with real soul. She has powerful positive energy on stage can only be compared with the Clashs Joe Stummer and a few others.

They should keep speeding their great energy out to us all and tell the story of our times — always focused on the heart and compassion. They will help so many people have a better life by showing how to combat alienation and lifeless art of MTV and Wal Mart. I recommend reading Guy DeBord on how to combat the alien spectacle through participatory art http://www.bopsecrets.org/SI/debord/

Roxy — we bow down and thank you for reaching out at the emotional level — everyone needs to lock hands and be part of the performance.

We must build community and compassion and have fun — that is what Epoxies music does. The real spirit of rock and roll is alive with the Epoxies… Chuck Berry and Little Richard would love you..
———————————————————-
5.0 out of 5 stars no sophomore slumps, great 2nd record!,
To appreciate the Epoxies you have to see them in person, but once you do you will love them forever. This record captures all the fun of their live show and it sounds better than their first CD.
———————————————————————————
5.0 out of 5 stars pretty in plastic,
The Epoxies captured an esthetic a few years ago. They were parts Devo and parts Kim Wilde. They were part imagination. New Wave bands back in the day could never really play very well. Or else they would have been Frank Zappa or ELP. I saw The Epoxies play a few years ago. They would always play with punk bands. They seemed to be inspired by many contemporary punk bands. The Epoxies were always somehow a cut above. For one, the sound of singer Roxy Epoxy was very distinct and she never really sounded like anyone else. On this second album The Epoxies have discovered their strengths and made things very interesting.
They have been inspired by the Pacific Northwest. It used to be the land of grunge, and nothing since for ten years. Portland, Oregon is a bombed out abandoned city. The Epoxies have breathed life into it. Songs like “Synthesized” and “Wind Me Up” are a s good as anything on their first album. The Epoxies have gotten better by relentless touring and gigs with some many different
bands. One couldn’t imagine a better album than the first. This is just that.
———————————————————–
5.0 out of 5 stars Fresh and Exciting,
The Epoxies are a fresh and exciting band out of the Pacific Northwest. They combine real punk energy with new-wavish idiosyncrasies. Their songs are funny, heartfelt and melodic, with a bit of tilt toward sci-fi themes. But this isn’t the sci-fi of the future–its the sci-fi of here and now. Roxy Epoxy is simply the most charismatic female rocker on the scene today, and the band gives her enthusiastic support.

“Stop the Future” is a step up from their self-titled debut (which is also a must-have). I only wish it were a bit longer. A minor complaint, though, considering how much I love whats here. I can listen again and again. If you’re looking for a truly great band on the rise, look no further.
————————————————————————————
5.0 out of 5 stars Buy it!,
I love the Epoxies. I bought this CD a few months ago and can’t stop listening to it. Their music is upbeat, danceable, and fun, a great pick-me-up after a long day at work. I like to describe their music as a female-fronted supercharged Devo. I cannot wait to see them perform live. Buy it and be happy.
——————————————————————
5.0 out of 5 stars The Epoxies Prove Its 1979 All Over Again!,
As someone who was buying records just like this one in 1979, I am in a sort of awe over how masterfully The Epoxies have grasped the New Wave tropes they use like they were born with them [and they probably were]. This is what I’ve always wanted out of music and was ecstatic to have arrive in the late 70s: crunchy guitars [for energy], buzzing synthesizers [for energy], coupled with deadpan vocals [a must for the ennui generation] that coalesce to create a paradoxical sort of vibrant, life-affirming cynicism that I consider the hallmark of New Wave music. These anthems of disaffection are played with such vigor and a sublimated kind of passion that they send me over the edge!

This utterly fantastic album gets 5 stars for carrying a tradition magnificently. It is difficult to imagine returning to a time and space to re-examine a style and then successfully carrying it forward in a way that differs from what actually happened. In the meantime, thrill to post-punk hits that never were like “Synthesized,” Radiation” and “Everything Looks Beautiful On Video!” The Epoxies also have the beautiful nerve to cover The Scorpions “Robot Man” from their [wait for it] 1979 album “Tokyo Tapes” without an ounce of irony. The Scorps should be pleased and you would be too! Too bad they dissolved, but Roxy Epoxy has a new album out and I need to get it or get hit!
———————————————————–
5.0 out of 5 stars Great Followup,
There first CD is so good I wasn’t expecting this one to be the same.I thought it would be good but not great.From the very beginning to the very end you never wanna skip a song,there all that good.I just hope there next CD doesn’t take another 3 years to come out. 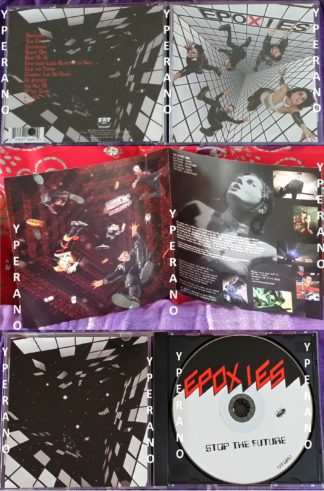