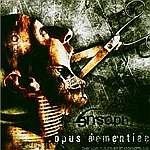 SAMPLES:  www.amazon.com/Opus-Dementiae-Per-Speculum-Aengmate/dp/B000QZTN3E/ref=sr_1_1_title_1_mus?s=music&ie=UTF8&qid=1381506261&sr=1-1&keywords=ENSOPH%3A+Opus+Dementiae
10 tracks of pure unorthodox gothic metal avant-gardisme. A bold mixture of powerful electro-industrial elements, sick and disturbed orchestrations, unconventional extreme metal and a huge range of vocal deliriums as you have never heard before.

Check all songs, every single one of them:

who?what? WOW!! – 85%
The Italian Ensoph offer a really aventgarde album and nowhere else fits the description “”avantgarde”” better than for this album, if you can imagine how a mixture of Cradle Of Filth and experimental gothic tunes would sound like you have a small clue how “”Opus Dementiae”” sounds like! The opener “”Jaldabaoth At The Spring Of Time”” starts with folk-alike flute players and bongos, these sounds are joined by crushing guitars and the clean singing of Nicholas. They also throw in electronically pieces but it’s getting really interesting after 1 1/2 minutes when they offer a perfect Cradle Of Filth part when the singer mutates to a high-pitched screaming monster and the music changes to modern black metal. This was also the moment I really started to enjoy Ensoph’s kind of sound ’cause a good mixture of laid-back folk-style, melancholic Gothic and evil black metal is quite rare. The second track “”In The Flesh (Visione Della Passione)”” also offers extraordinary musical styles while weird electronically noises join short black metal madness but they also throw in a lot rock pieces. “”Sophia’s Fall”” comes up with a few more evil parts and the first minutes the singer is screaming his lungs out with his high-pitched screams, he’s supported by electronically tunes and again a few flute players. Notable is their interpretation of the different styles because when they play calm tunes their singer offers often high-pitched screams and when they play a blasting metal piece the singer adds clean singing/shouting! So that Ensoph always offer a mixture of various styles and never use classically combinations of the common styles.ORIGINAL!!

Goth, doom, industrial? Either way, Ensoph has come up with something on the grandeose scale with “Opus Dementiae”. You’d swear this was some kind of a tribal or African music by the start of “Jaldabaoth At The Spring Of Time” but it soon gives way to a heavy riff accompanied by a flute. You’d be surprised at the aural effect it can add to such a “chugga-chugga” chunky riff! Aside from the flute you’ll get a heaping helping of over the top keys on “In The Flesh (Visione della Passione)” that really create a feeling of space and sense of theater. “Sophia’s Fall” is chock full of loops and flutes and yes, some organized chaos to scramble your brain. “Faith Defeat” shows a bit of a death metal influence. Sounds like someone has their hand on the turntable with some of the sour notes on “Salmo a Nessuno” but it showcases the more industrial side of Ensoph. After a slow and spooky start, “White Lamb Seducer (40 Days and 40 Nights)” turns into quite headbanging little number. “Lies Of The Mirror Which Lies Not” combines the death and doom aspects before the twists and turns of “Son Of The Liar” send you into a dizzy spell. Nicholas really lets loose some guttural screams on “Proudly Divine (Ink and Mirrors and Empty Tombs)” to close out the album. Well almost. “Sophia’s Fall (Sophies Welt RX)”, a remix, a goth dance remix at that, actually chimes in as the last track and puts an electronica spin on what was the metal lines of the song. Overall the flue addition is something that has not been attempted too much in a setting like this. A female vocal a la Cradle Of Filth has been done and done well but nothing to the level that Ensoph has attempted here. At times it will really throw you for a surprise where as in others it will be a welcome and suttle complement. A really nice blend of dark gothic elements and metal with one or two twists of folk music along the way from this Italian unit. Favorite flavor? Operatic vocals (Angelic?) that duel it out with growly, benath-the-dirt vocals (Demonic!) over richly textured music that moves the listener to both rage and reflection. Tracks such as “Faith Defeat,” “Salmo A Nessuno” and “Sun Of The Liar” are great, but “Sophia’s Fall” remains the absolute best here and maybe the best demonstration of how Ensoph works its magic. If you draw no lines between Sisters Of Mercy and Emperor, Mr. Bungle and Marilyn Manson, then Ensoph is probably the band you’ve been waiting for.