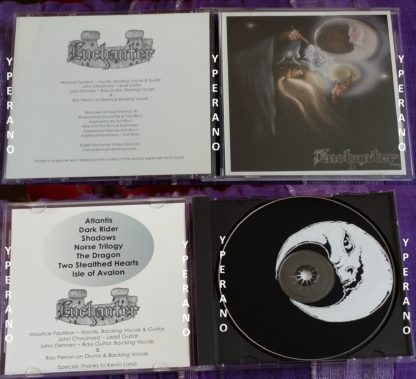 ENCHANTER is a U.S. Metal band that exists for many years now and this is their first release after a same titled EP which is impossible to get nowadays. This CD was released in 2001 and this is killer CD. The first positive impression comes from the amazing cover artwork done by the bands drummer, Ray Perron.
If you are fans of U.S. Metal and more specifically of bands like OMEN, Mystic Force, AXEHAMMER and MANILLA ROAD then you will love this one! Killer compositions with a vocalist as great as J.D. Kimball of Omen.
10 years ago the CD was only available through the bands website and through various small mail-orders. No this CD is very rare.

In the year of 2001 this gem saw the light of the world. A gem which will please hords of the Epic Metalheads out there! ENCHANTER is the name of the band I am talking about. ENCHANTER play moving, utterly magical, epic Metal, which is carried by the deep, raw voice of Maurice Fauteux. Its foundation is laid by a lead bass, two axes and true thunder kettles. Especially the memorable bass runs stand out and fit ENCHANTER excellently. This unbreakable backbone compliments the dark tales told here.

Stylistically they are somewhere in the golden middle between MANILLA ROAD, BROCAS HELM and OMEN. The compository level is very high and this band has this certain magic that makes them an exception in todays faceless Metal circus. Of course the singer is no vocal acrobat and the musicians dont fuddle around to prove who is the bestOne who has godly songs like Norse Trilogy or Two Stealthed Hearts in his repertoire and manages to send shiver after shiver down the spine of an old Metalhead who owns thousands of CDs deserves my respect. In fact the album consists of songs I dont want to miss. So absolute must buy!

Oh right, even though this silver disc clocks in just above “Reign In Blood, the money is well-spent.

M.I.: Can you fill us in about each song separately? Lets begin with the first one which is “Atlantis”, one of my favorites from the CD.
ENCHANTER: Atlantis is about being overly powerful and being ignorant about it. We all know the story about the Island that sank. It is also where Merlin was born, which leads to the rest of the stories on the CD.

M.I.: next is “Dark Rider” with a very strong OMEN influence.
ENCHANTER: “Dark Rider” is song of courage and strength.

M.I.: “Shadows”
ENCHANTER: “Shadows” is one of my favorite tracks. Its about overcoming failure and realizing your dreams.

M.I.: “Norse Trilogy” has an obvious theme I guess…
ENCHANTER: Norse Trilogy is a three part epic about the Vikings invading England.

M.I.: “The Dragon” is the instrumental. But is there anything that you would like to say about this track?
ENCHANTER: This showcases John Chouinards guitar talents. The ending has 54 chords and is the only place on the record that Maurice plays guitar. He does the lead at the end.

M.I.: “Two Stealthed Hearts” is the “ballad” of the CD.
ENCHANTER: This song has meaning to each of us. Its a love song about not being able to be with the one you want.

M.I.: Last is probably the best song, named “Isle of Avalon” a real Epic Masterpiece at least for me!!
ENCHANTER: This was a tough track to cut. This closes the record as to how “Atlantis” opens it. 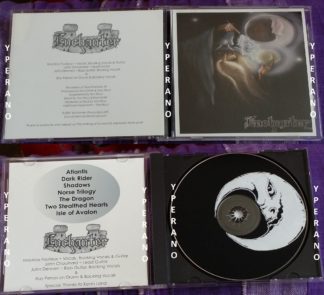