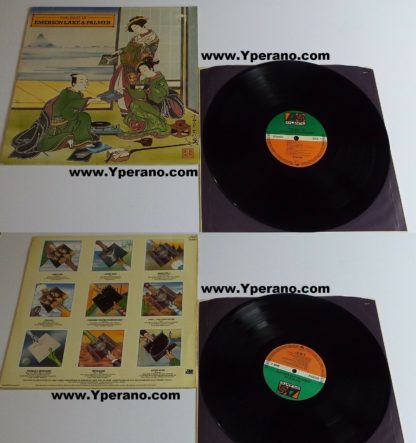 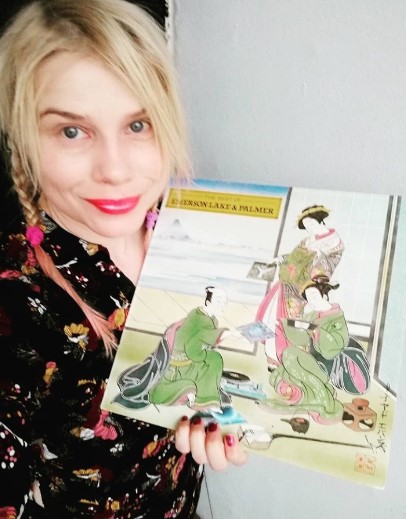 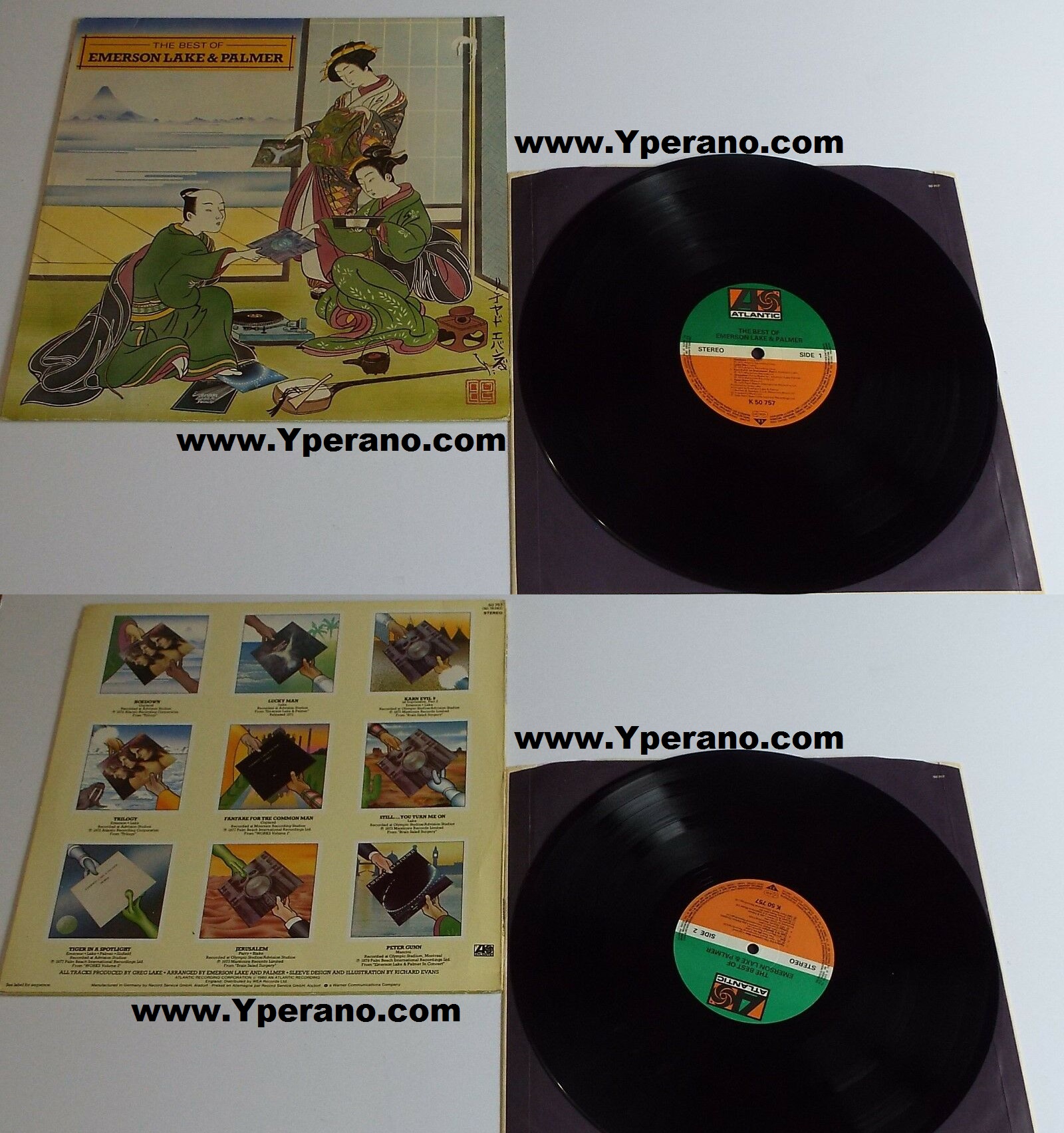 Original running time was 38:51 and has 9 tracks.
Hoedown (3:46)  A showstopper that was actually a show starter for two tours, “Hoedown” was the first ELP adaptation of composer Aaron Copland, as brassy a show-off (in his way) as the trio itself. Keith Emerson began work on the piece after returning from a classical festival in Romania, so East European elements find their way into his rollicking organ and Moog arrangement alongside American folk tunes like “Shortnin’ Bread” and “Turkey in the Straw.” Emerson stumbled onto the track’s signature synth sound by chance: “We’d started working on that arrangement and then I hit, I don’t know what, I switched a blue button and I put a patch cord in there, but anyway, ‘whoooeee.'”
Lucky Man (4:38)  Dredged up from memory by Greg Lake, who wrote it at age 12 upon receiving his first guitar, “Lucky Man” is a “simplistic little medieval fantasy” (according to its composer) intended to fill out the trio’s first album. It turned out to be the Moog synthesizer’s pop breakthrough thanks to Keith Emerson’s memorable first-take solo – on a newly delivered instrument – as it ended. Emerson would have preferred a second pass, but no tracks were left to record on, so “that’s the solo I’ve had to live with!” The tune accrued its own mythology when listeners began associating its lyrics with public figures like President John F. Kennedy. R.G.
Karn Evil 9 (1st Impression, Part 2) (4:48) One of the most iconic progressive rock epics ever recorded, “Karn Evil 9” embodied everything that prog was both loved and reviled for. A staggeringly complex and ambitious work in three “impressions,” the centerpiece of 1973’s Brain Salad Surgery explored the weighty theme of man versus technology, while also giving the band members ample space in which to showcase their instrumental virtuosity. Though truly “the show that never ends” to the band’s detractors, the half-hour-long dystopian fantasy sounds prescient today. “It was the start of computer technology, and already we were being accused of using computer technology in our instrumentation to the point that some people actually believed that when we played onstage it wasn’t us!” Keith Emerson recalled in 2000. “When we did it live I had the Moog turn around, face the audience and blow up while we left the stage. It was like saying, ‘This is computer technology and it’s taking over.'” D.E.
Jerusalem (2:45)
Peter Gunn (3:37)
Fanfare for the Common Man (2:57) The first track on the collaborative side of ELP’s solo-centric double album Works Volume 1, “Fanfare for the Common Man” was adapted from a 1942 composition by Aaron Copland, whom Keith Emerson regarded as “the soul of American music.” Emerson transposed Copland’s score to the key of E, and the band recorded the track as an inspired first take that sandwiches a nasty blues shuffle between straight-forward renditions of Copland’s theme, which led the composer to observe, “What they do in the middle, I’m not sure exactly how they connect that with my music but [laughs] they do it someway, I suppose.” Released with the composer’s blessing, the trio’s 10-minute adaptation would become a ubiquitous fist pumper during many televised sports events. R.G.
Still…You Turn Me On (2:54) “Rock technology is just not yet advanced enough,” Emerson lamented in a New York Times interview in 1973. Like the rest of the band, he was always groping for the next innovation that might fuel ELP’s evolution — although on “Still… You Turn Me On” from the group’s fourth album, Brain Salad Surgery, the notoriously tech-driven outfit pared things down. Relatively speaking, anyway; the Lake-penned tune doesn’t go in for many frills, relying instead on a luscious melody and Emerson’s tasteful synth flourishes — not to mention a startling dose of a different kind of innovation, at least for ELP: funk. Mostly it’s the balance between Lake’s songcraft and Emerson’s atmosphere that makes “Still… You Turn Me On” so timeless. Even when obsessed with the sounds of the future, ELP knew a good tune was always at the heart of their art. J.H.
Tiger in a Spotlight (4:35)
Trilogy (8:51) Emerson’s lilting, melodic piano opens “Trilogy,” the longest and most ambitious track from ELP’s third album. Co-written by Emerson and Greg Lake, it starts out with uncharacteristic restraint: The song is almost a conventional, straightforward, even Zombies-esque love ballad – that is, until the monstrous riffs and baroque synth workouts that hold layers upon layers of intricacy. As Emerson told Disc magazine the year of the song’s release, “I try to cover all sorts of things in my music so there are lots of things to be discovered in it maybe a little later. That’s one of the important points in music, the discovery by the listener of new things every time they hear a piece of music.”

5.0 out of 5 stars A Great Collection Starter
A few years ago, I had never heard of ELP. But after listening to this compilation, I have grown to become one of ELPs greatest fans. It sounds cheesy, but its true. This Best of… album combines everything that ELP was all about: Greg Lakes ballads, Keith Emerson’s progressive themes, classical re-workings and Carl Palmer’s God-like playing ability. The first time listening to this, I was swept away by the sound that these three musicians were able to create during the musical-industry-equivalent of the Dark Ages. The profound and unheard of use of the synthesizer at this early stage of progressive music sparked such creativity that cannot be expressed within the 1000 word-count limit. After being an avid ELP fan for the past few years, I still feel that this is the album that led me to the path of progressive rock, which I still feel has always been under appreciated. This album is a must-buy for anyone who is interested in listening to good and innovative music.

5.0 out of 5 stars ELPs Prime Cuts
An excellent sampling of tracks from this quintessential progressive rock act of the 70s. This is geared to those curious enough to sample music from this incredible trio, and/or for those who are wanting a representation of the bands most accessible selections for their music collection. Emerson, Lake & Palmer at their best were always a musical symbiosis of the classical adaptation offerings and majestically-influenced keyboard wizardry of Keith Emerson, along with the more straight-forward, highly accessible romantic balladry of guitarist/vocalist Greg Lake, balanced by the technical prowess of percussionist Carl Palmer. Emerson’s stylings take a bit of a back seat to Lakes on this collection. Nonetheless, “Trilogy,” “Fanfare for the Common Man,” “Hoedown,” and the 20-minute epic suite, “Tarkus,” represent some of the keyboardists’ finest works. Lake ballads such as “Lucky Man,” “Still…You Turn Me On,” “From the Beginning,” and “C’est La Vie,” kept ELP on album-oriented FM radio throughout most of the decade. One listen to “Jerusalem,” “Karn Evil 9,” should be enough to convince anyone of the sheer power, majesty and brilliance that is Emerson, Lake & Palmer. 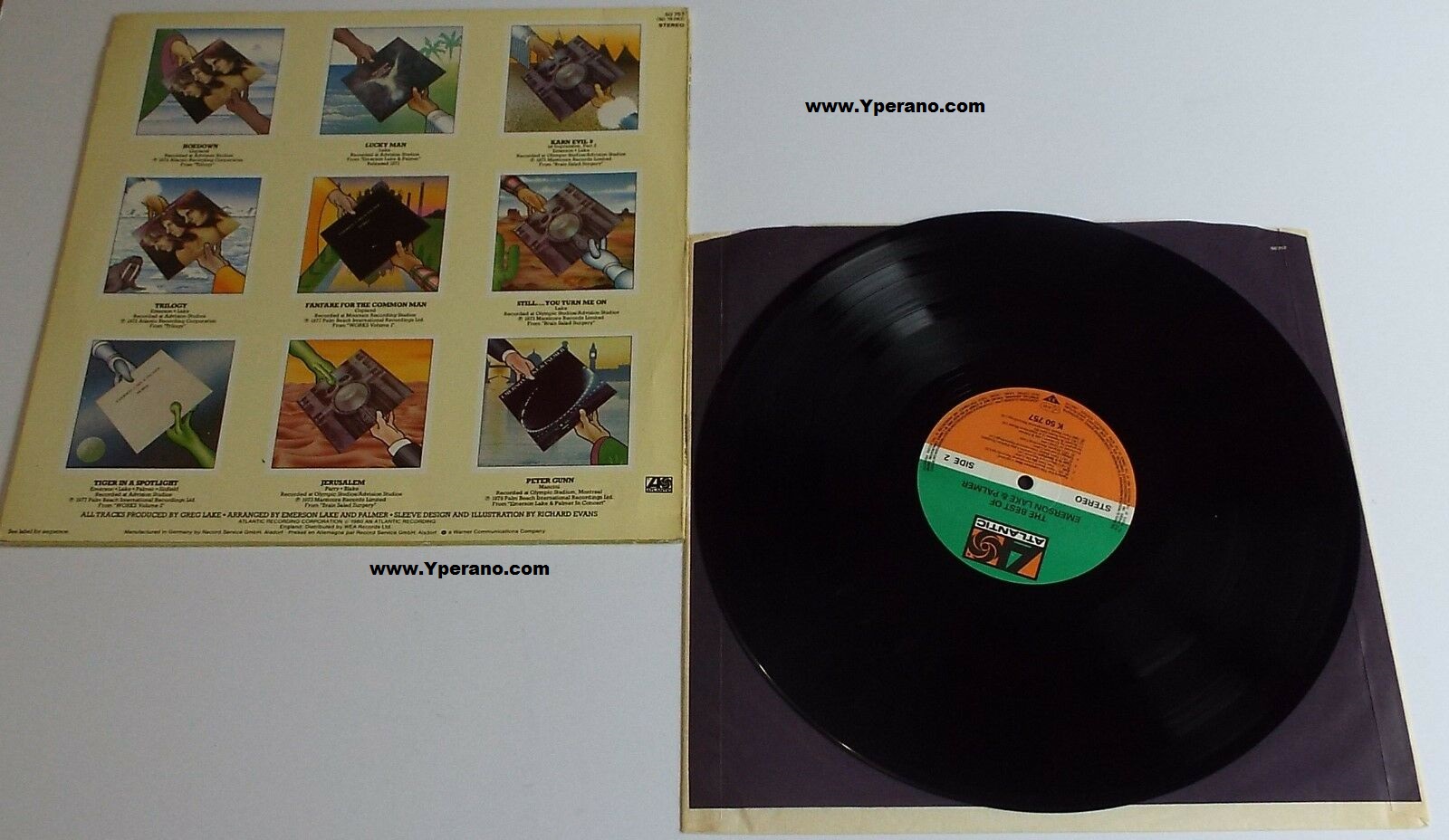 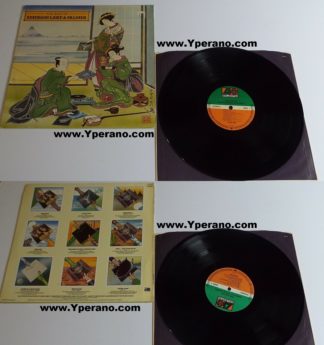